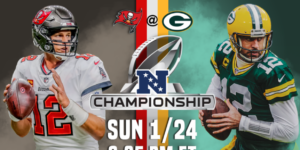 The time is here. First game of the day, Bucs at Packers, starts in less than an hour. Never pick against the Pack at home, but the Bucs and Brady may give them a game on the Tundra. I have no clue how it plays out, and make no pick. Yes, it is probably cowardly of me.

The second game is Bills at Chefs. On paper, this is an easy pick. Games are not played on paper though. on the field, there is no way to sell the Bills short as to having cause to be here. They are great, and a great story. I, again, will coward out and have no clue how it unfolds.

Two great matchups and four great, and admirable, teams. That is how it should be. Games on!

Mondays may be manic, but the Bangles knew/wished Sundays were too. There is goodness that there is no Trump dick wagging on social media to interrupt this day. Let’s have some fun, and rock the day.

It is early Saturday afternoon here in the comfy confines of Casa de Bmaz in the desert cactus patch. Snowly Shit is afflicting everywhere from the northeast to southeast. Bad. It is kind of sick, but I have been watching the news and fielding Twitter feeds from good friends in the afflicted area for 24 hours now. All from the comfort of 74º high days. Wearing a suit, I actually had to use the air conditioner in my cay yesterday afternoon. Don’t fret, in a few more months, it will be 110º here and they can all laugh at me.

Frankly, I would kill to be in the winter maelstrom in New York and Washington DC, just to experience it. With plenty of food and booze properly stocked up, along with backup power, of course. But I am here, and so many of you and other friends are there, and my heart and best wishes go out to you. There are conference championship games afoot, and hopefully all can enjoy them comfortably, wherever you are.

First up is the Patriots at Broncos. Peyton Manning versus Tom Brady. Yadda yadda yadda. But there are 10 other people on the field for each on offense and 11 on defense. Brady will not lose the game. Manning could given his old age infirmities, but I would be stunned if that were the case. The Pats, despite Belichick’s infamously worthless injury reports, seem to be pretty healthy. Especially so as to Edelman and Gronk, which mean everything to Brady. The Donkos, maybe a little less so because of DB Chris Harris’ shoulder. If he is weak opposite Aqib Talib, that will be an exploitable problem.

It would be pretty easy to take the Pats here, all things being equal. But things are never equal, especially in this kind of battle. There are two other factors that I think – think – may be key. First, the Broncos are home in Mile High. And that is a brutal place for any team to play, anytime. But it has been especially toxic for the otherwise invincible Patriots, Brady and Belichick. It is not that they have never won there, but it has been an uncommonly black hole.

Secondly, the Broncos, under Mike Shanahan, had the best head to head success against Belichick, Brady and the Pats of anybody. Gary Kubiak was the OC on most all of those matchups. Shanahan altered his offense against Belichick to have a balance two tight end set on offense to compensate and pitch up the Belichick tactic of overloading the weak side. This not only protected the QB, but facilitated the run game. Kubiak knows the tricks that Shanahan used to be so successful. I bet Kubiak draws off that. Is it enough?

I dunno, but if I was betting real money, it would be on the Pats and Brady. I think they want to see Roger Goodell at Super Bowl 50, and I think they will. Even the New York Times now recognizes that Goodell and the NFL were horse’s asses in Deflategate. Which I explained from the start, both on Twitter and here. Also, ESPN has a real problem with ignorant assholes. First it was Curt Schilling, then Chris Mortenson perpetuating the patent fraud of Deflategate, and now blithering idiot Danny Kanell who is literally calling for the Broncos to take Tom Brady out with dirty hits.

The second game is Cardinals at Panthers. I probably have too many emotions wrapped up in this one to be overly fair. The Cards versus Packers was tough for me. Cards versus Panthers, however, is beyond an easy call. The Panthers are very good, and Cam Newton has turned into one hell of a pro quarterback, but the Panthers are basically not that easy to like for me.And certainly not this weekend.

The quarterbacks, on paper, look to be nearly a draw. If there is any justice, they will seriously finish first and second in the league MVP voting. Newton should absolutely win, but Carson Palmer is an arguably close second. Palmer is a better read and throw guy, and arguably better passer, but Cam Newton has gotten very good at that and can run in ways that Palmer can’t dream of. Edge Newton and Panthers. But Palmer and the Cards have better receivers and packages to exploit them, by a light year. Huge edge to the Cards there. The battle of offenses will come down to which offensive line plays and protects better. Frankly, that is probably what the game comes down to as well.

Which leaves the defenses. Both are better than average on the defensive line. Carolina has a big advantage at linebacker, and Kuechly is simply killer. Despite Josh Norman, the Cards may, if they play well, have a slight advantage in the secondary. This would be a no brainer in the Cards’ favor if Tyrann Mathieu was on the field, but, alas, that is not to be.

So, what is the bottom line? Carolina is at home, which is always to be paid attention to. These are very clearly the two best teams in the NFC this year, and it is perfect they are playing for the Championship. I have no idea who wins, but they match up well against the Panthers and the two teams played in Carolina last year. But there is a hell of a difference between a healthy Arizona team with Carson Palmer at QB than a decimated Cards team with Ryan Lindley at QB. By the same token, Palmer and the Panthers are far better too. It is a tossup, but heart is very much with the Cardinals. Go #BirdGang

Alrighty then, that is a wrap for this Trash. Music, in honor of all the winter weather affecting the east is by the Bangles, with an incredibly awesome version of Hazy Shade of Winter. Rock and roll hootchicoos.