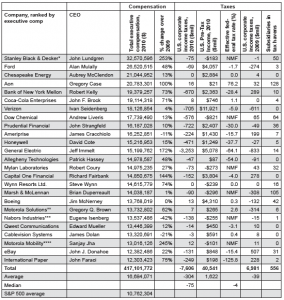 A number of outlets have carried the report on the number of CEO’s getting paid more than their companies paid in taxes last year, but few have linked to the actual report, which means just the usual suspects, like GE’s Jeff Immelt, are getting the bulk of the focus.

Yet if you look at the appendices (pages 31-33–click the picture to the right to enlarge it), the report not only lists all the companies paying their CEOs more than they pay Uncle Sam, but provide details like the company’s political spending.

Among those listed in the report not getting much attention is Bank of New York Mellon’s CEO Robert Kelly, who got millions while his company got a $670 million tax refund.

Kelly’s compensation has skated above $10 million during each of the past three years of financial crisis. The CEO artfully managed to avoid the salary limits President Obama’s “pay czar” imposed on bailed-out banks by making sure Bank of New York Mellon repaid the taxpayer funds before those restrictions went into effect.27 The bank raised the money to pay back its $3 billion in TARP assistance by taking on uninsured debt, slashing dividends, and issuing new stock.28

The Bank of New York Mellon, with 10 subsidiaries in tax havens, did not pay a dime in federal taxes in 2010. However, the banking giant did devote $1.4 million to lobbying over the year. The bank’s lobbyists worked diligently to exempt currency trading from new transparency and oversight rules.29 In related news, officials from eight U.S. states are conducting inquiries or pursuing litigation against Bank of New York Mellon for ripping off state pension funds by overcharging for currency trades. The Securities and Exchange Commission and Justice Department are also investigating the allegations.

Screwing pension funds on currency trades is not the only anti-social behavior the federal government gave BNYM a refund to engage in. They’re also the trustee on the controversial Bank of America settlement.

That’s relevant because of the terms the settlement’s chief defender, Kathryn Wylde, has used to defend it, particularly in the face of Eric Schneiderman’s lawsuit to stop it.

Characterizing her conversation with Mr. Schneiderman that day as “not unpleasant,” Ms. Wylde said in an interview on Thursday that she had told the attorney general “it is of concern to the industry that instead of trying to facilitate resolving these issues, you seem to be throwing a wrench into it. Wall Street is our Main Street — love ’em or hate ’em. They are important and we have to make sure we are doing everything we can to support them unless they are doing something indefensible.”

Now, as I’ve already pointed out, it’s sort of odd for Wylde to defend Bank of America, a North Carolina corporation, in her role as NYC’s chief booster.

But if BNYM is paying nothing in the US–rather is getting tax refunds–on its $2.5 billion global profit, then presumably it’s a corporate resident of some other place, not New York, not the United States. So maybe, in addition to North Carolina, Wylde has added the Cayman Islands to the list of places whose corporations she defends as her own Main Street?

In any case, Wylde says Schneiderman shouldn’t sue to prevent BNYM’s scam settlement with BoA. Why is she protecting such a giant corporate deadbeat?