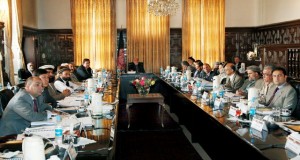 Stop me if you’ve heard this one before. We have headlines at multiple news outlets trumpeting that the US has ceded control of Parwan Prison (newly re-named today as the Afghan National Detention Facility at Parwan!), but when we drill down just a bit, we see that the US can never truly let go of its love of indefinite detention without trial, and so they have held back a few prisoners from today’s deal. Rod Nordland and Alissa Rubin do the best job of cutting through the US reliance on deception and semantics with their article in today’s New York Times, where even the headline writer got into the spirit of seeing this “agreement” as it really is: “U.S. Cedes Control, Almost, on Afghan Prisoners“.

At the heart of the long-standing difficulty in handing over control of the Parwan facility has been the US insistence that some prisoners be maintained indefinitely without charge while Afghanistan has continued to point out that the rule of law should prevail and all prisoners deserve a trial to determine their guilt. Nordland and Rubin were fed a list of recidivist Taliban figures who have been released by Afghanistan only to return to battle, but they did not allow that information to cloud their reporting on the fact that the US has held back some prisoners in the handover:

The American military formally transferred all but “a small number” of the Afghan prisoners at the Bagram Prison to the Afghan government on Monday in a ceremony that almost, but not quite, marked the end of the American involvement in the long-term detention of insurgents here.

Afghan officials said the review boards will no longer exist and all prisoners at Bagram, present and future, will go straight into normal judicial proceedings. American officials, however, said they expected the Afghans to maintain review boards, but without American participation. The difference may be a semantic one, as Afghans expect teams of prosecutors to review which prisoners are released and which are prosecuted in court.

An American military official in Kabul insisted that the military has confidence that those insurgents whom the United States views as enduring security threats would not be released easily or quickly. “These people pose a threat to Afghan soldiers and Afghan civilians, too,” the official said. “We’re confident they will have appropriate measures in place to ensure dangerous detainees don’t pose a threat to Afghan and coalition forces.”

The Americans have long argued for a nonjudicial review process and a way to hold insurgent prisoners in long-term administrative detention, because of the difficulty of building criminal cases under battlefield conditions. Americans have argued that without such a system, soldiers in the field may be tempted to kill rather than capture insurgents. Afghan officials objected that administrative detention was unconstitutional.

We get a bit more information on the prisoners held back in the AP story carried in the Washington Post:

The detention center houses about 3,000 prisoners and the majority are already under Afghan control. The United States had not handed over about 100, and some of those under American authority do not have the right to a trial because the U.S. considers them part of an ongoing conflict.

There are also about three dozen non-Afghan detainees, including Pakistanis and other nationals that will remain in American hands. The exact number and nationality of those detainees has never been made public.

“They are not the priority of the Afghan government so the Americans can keep them for the time being. Our priority are the Afghan detainees,” Afghan Defense Ministry spokesman Gen. Zahir Azimi said.

The US sweetened the pot today with an extra $39 million in funding for the facility on top of the approximately $250 million it has already spent building and maintaining it.

Both Afghan news sources I follow, Khaama Press and TOLONews, run straight stories today reporting full handover without mentioning the prisoners that the US is holding back.

All coverage of today’s handover agreement that I have read does place it in the context of the next agreement that is required on whether US troops remaining behind after the NATO withdrawal at the end of 2014 will have criminal immunity. (I must have made too many SOFA jokes in post headlines, because now all US news sources refer to the need for a “bilateral security agreement” rather than a “status of forces agreement”.) The timing for getting today’s agreement in place is quite significant, as John Kerry has suddenly appeared in Afghanistan, presumably to do a bit of SOFA shopping. I’m guessing he will promise a very good purchase price.

Update: The New York Times article has mutated and no longer has the headline that was so revealing. New headline: “Amid Fears of Releases, U.S. Cedes Prison to Afghanistan”. Oh well, the clear explanation lasted for a while and even still lingers in the url of the article.