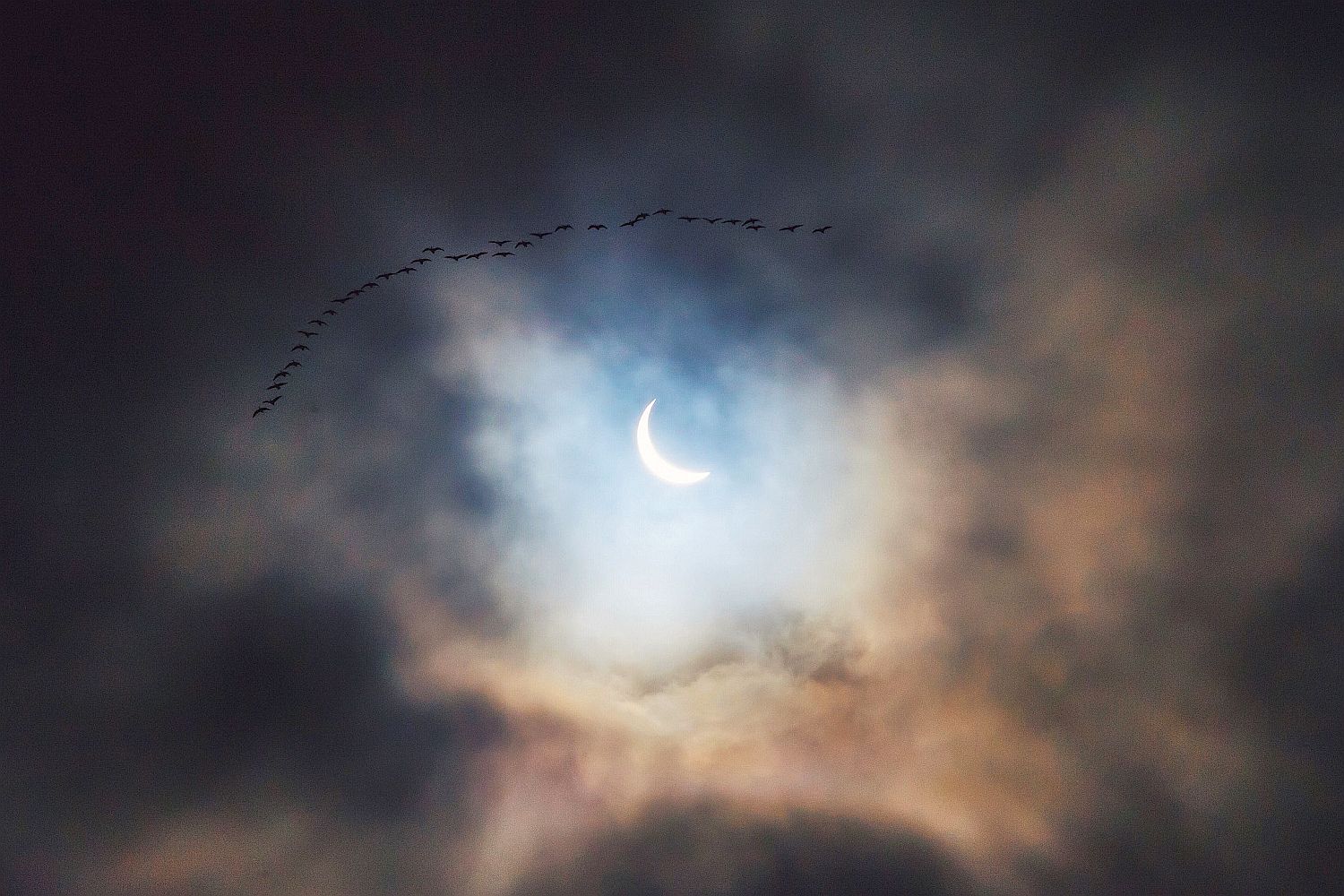 I’ve been trying to write all morning but I’ve been interrupted so many times by people looking for information about eclipse viewing I’m just going to post this in progress.

As you’ve no doubt heard, much of the U.S. will experience a solar eclipse over the next three hours. It’s already begun on the west coast, just passing totality right now in Oregon; the eclipse started within the last 25 minutes in Michigan. And as you’ve also heard, it is NOT safe to look directly at the sun with the naked eye or sunglasses. A pinhole viewer is quick and safe to make for viewing. See NASA’s instructions here and more eclipse safe viewing info here.

We are also experiencing one of NASA’s most important services: public education about our planet and science as a whole, of particular value to K-12 educators. We can’t afford to defund this valuable service.

At this point you may imagine me on my deck holding a Rube Goldberg contraption designed to view the early partial eclipse we’ll see in Michigan — only 77% or so coverage.

KILLER ROBOTS: There’s been a fair amount of coverage this week touting Elon Musk’s call to ban ‘killer robots’. Except it’s not just Elon Musk, it’s a consortium of more than 100 technology experts which published an open letter asking the United Nations to restrain the development of ‘Lethal Autonomous Weapon Systems’ (LAWS).

I’ve pooh-poohed before the development of new military technology, mostly because DARPA doesn’t seem to be as fast at it as non-military researchers. Exoskeletons are the best example I can think of. But whether DARPA, the military, military contractors, or other non-military entities develop them, AI-enabled LAWS are underway.

More importantly, we are very late to dealing with their potential risks.

Reading about all the Musk-ban-killer-robots pieces, I recalled an essay by computer scientist Bill Joy:

… The 21st-century technologies – genetics, nanotechnology, and robotics (GNR) – are so powerful that they can spawn whole new classes of accidents and abuses. Most dangerously, for the first time, these accidents and abuses are widely within the reach of individuals or small groups. They will not require large facilities or rare raw materials. Knowledge alone will enable the use of them.

I think it is no exaggeration to say we are on the cusp of the further perfection of extreme evil, an evil whose possibility spreads well beyond that which weapons of mass destruction bequeathed to the nation-states, on to a surprising and terrible empowerment of extreme individuals.

Nothing about the way I got involved with computers suggested to me that I was going to be facing these kinds of issues. …

He wrote this essay, The Future Doesn’t Need Us, in April 2000. Did we blow him off then because the Dot Com bubble had popped, and/or our heads hadn’t yet been fucked with by post-9/11’s hyper-militarization?

This part of his essay is really critical:

… Kaczynski’s dystopian vision describes unintended consequences, a well-known problem with the design and use of technology, and one that is clearly related to Murphy’s law – “Anything that can go wrong, will.” (Actually, this is Finagle’s law, which in itself shows that Finagle was right.) Our overuse of antibiotics has led to what may be the biggest such problem so far: the emergence of antibiotic-resistant and much more dangerous bacteria. Similar things happened when attempts to eliminate malarial mosquitoes using DDT caused them to acquire DDT resistance; malarial parasites likewise acquired multi-drug-resistant genes.2

The cause of many such surprises seems clear: The systems involved are complex, involving interaction among and feedback between many parts. Any changes to such a system will cascade in ways that are difficult to predict; this is especially true when human actions are involved. …

The Kaczynski he refers to is Ted “Unabomber” Kaczynski, who Joy believes was a criminally insane Luddite. But Kaczynski still had a valid point. Remember StuxNet’s escape into the wild? In spite of the expertise and testing employed to thwart Iran’s nuclear aspirations, they missed something rather simple. In hindsight it might have been predictable but to the experts it clearly wasn’t.

Just as it wasn’t obvious to computer scientists over more than a decade to close every possible port — including printer and server maintenance ports — regardless of operating system so that ransomware couldn’t infect systems. Hello, WannaCry/Petya/NotPetya…

We’ve already seen photos and videos of individuals weaponizing drones — like this now-five-year-old video of an armed quadrotor drone demonstrated by a friendly chap, FPSRussia — the military-industrial complex cannot and should not believe it has a monopoly on AI-enabled LAWS if these individuals have already programmed these devices. And we don’t even know yet how to describe what they are in legal terms let alone how to limit their application, though we’ve received guidance (read: prodding) from technology experts already.

The genie is out of the bottle. We must find a way to coax it back into its confines.

SALT MINES: On a lighter note, molten salt may become a cheaper means to reserve energy collected by alternative non-fossil fuel systems. Grist magazine wrote about Alphabet’s X research lab exploring salt as a rechargeable battery as an alternative to the much more expensive current lithium battery systems. Lithium as well as cobalt have challenges not unlike other extractive fuels; they aren’t widely and cheaply available and require both extensive labor and water for processing. Salt — sodium chloride — is far more plentiful and less taxing on the environment when extracted or collected.

One opportunity came to mind as soon as I read the article. Did you know there was a salt mine 1200 feet below the city of Detroit for decades? It’s a source of road salt used on icy roads. It may also be the perfect place for a molten salt battery system; the Grist article said, “Electricity in the system is produced most efficiently when there is a wider temperature difference between the hot and cold vats.” A salt mine underneath Detroit seems like it could fit the bill.

I feel for you folks in states with cloud cover — no good excuse today to take a break outside and slack off beneath the eclipse.