TIME, you old gipsy man,
Will you not stay,
Put up your caravan
Just for one day?

If last week’s Friday chamber jazz was most like me, this genre is next to it. Gypsy jazz is what my grandfather always hoped I’d learn to play; I learned to love Django Reinhardt with Stephane Grapelli at his knee. This stuff makes a bad day move along briskly, makes heavy hearts light. I don’t mind the added filip some smart ass added to the embedded video of Hot Club of Dublin featured here — seems fitting for the tune’s mood.

Unfortunately I have to be away from my desk this morning on a mission of mercy. If I’m stuck someplace with decent WiFi I will try to share a few things I’ve been reading. Otherwise use this as an open thread and tell me what you’ve got planned this weekend — hope it’s something fun!

Aussie company touting anti-Zika virus condoms and gel – what? (Sydney Melbourne Herald) — Are you kidding me? Just use a damned condom. Think about it: plain old condoms are recommended as protection against viral STDs like HIV.

Maps showing borders India doesn’t like may earn jail time and fines (QZ-India) — Wondering why this issue has bubbled up again, not that the border with Pakistan has ever been resolved to India’s satisfaction.

Carnegie Mellon team turn human skin into touch tech (The Verge) — Um, this was done back seven years ago by MIT, called “Sixth Sense,” and released as open source a year later. Still wondering why that tech wasn’t commercialized.

Edward Snowden’s revelations have shed much light on how secret government programs are collecting huge amounts of telephone, email and other electronic data generated by every US citizen even though, as Marcy has shown repeatedly, claims that collecting all of this data have enabled the capture of terrorists turn out to be significantly overblown. Sadly, it’s not just records of our communications that the government is collecting. The FBI is taking the lead in putting together what it calls Next Generation Identification. This program will expand the conventional FBI fingerprint database to include significant amounts of biological, or biometric data. From the FBI’s own description:

The future of identification systems is currently progressing beyond the dependency of a unimodal (e.g., fingerprint) biometric identifier towards multimodal biometrics (i.e., voice, iris, facial, etc.). The NGI Program will advance the integration strategies and indexing of additional biometric data that will provide the framework for a future multimodal system that will facilitate biometric fusion identification techniques. The framework will be expandable, scalable, and flexible to accommodate new technologies and biometric standards, and will be interoperable with existing systems. Once developed and implemented, the NGI initiatives and multimodal functionality will promote a high level of information sharing, support interoperability, and provide a foundation for using multiple biometrics for positive identification.

Wait. See that “etc.” in the “voice, iris, facial, etc”? Given the government’s behavior on electronic data, throwing in an “etc.” on biometric data is pretty unnerving. Impressive work is being done by the Electronic Privacy Information Center to shed light on just what the government is up to with Next Generation Identification. Here is their description of the program:

The Federal Bureau of Investigation is developing a biometric identification database program called “Next Generation Identification” (NGI). When completed, the NGI system will be the largest biometric database in the world. The vast majority of records contained in the NGI database will be of US citizens. The NGI biometric identifiers will include fingerprints, iris scans, DNA profiles, voice identification profiles, palm prints, and photographs. The system will include facial recognition capabilities to analyze collected images. Millions of individuals who are neither criminals nor suspects will be included in the database. Many of these individuals will be unaware that their images and other biometric identifiers are being captured. Drivers license photos and other biometric records collected by civil service agencies could be added to the system. The NGI system could be integrated with other surveillance technology, such as Trapwire, that would enable real-time image-matching of live feeds from CCTV surveillance cameras. The Department of Homeland Security has expended hundreds of millions of dollars to establish state and local surveillance systems, including CCTV cameras that record the routine activities of millions of individuals. There are an estimated 30 million surveillance cameras in the United States. The NGI system will be integrated with CCTV cameras operated by public agencies and private entities.

So just as the government has moved far beyond tapping communications only with a warrant to include the communications of innocent civilians, biometric identifiers of innocent civilians will be included in NGI alongside identifiers of known criminals. And what could possibly go wrong with our information being assembled in this way? Here’s how EPIC says the database will be built and maintained: END_OF_DOCUMENT_TOKEN_TO_BE_REPLACED

In a news conference this morning, Afghanistan’s Defense Ministry spokesman General Zahir Azimi announced that “hundreds” of soldiers have been dismissed from the Army or detained in a probe that began six months ago and is aimed at removing soldiers with ties to insurgents and therefore pose a risk for green on blue attacks. Separately, NATO Secretary-General Anders Fogh Rasmussen telephoned Afghan President Hamid Karzai to urge further action by Afghanistan to stem green on blue killings. Remarkably, Rasmussen acknowledged that NATO training on “cultural awareness” is important to stopping the increasing rate of these attacks. After first attempting to retroactively classify the report “A Crisis of Trust and Cultural Incompatibility” it appears that perhaps NATO is finally ready to take actions aimed at implementing its recommendations to raise the awareness of NATO troops regarding actions and attitudes that conflict with deeply-held beliefs of Afghan recruits.

The Afghan army has detained or sacked hundreds of soldiers for having links to insurgents, the Defence Ministry said on Wednesday, as it tries to stem an alarming number of so-called insider attacks eroding trust between Afghans and their allies.

“Hundreds were sacked or detained after showing links with insurgents. In some cases we had evidence against them, in others we were simply suspicious,” Ministry spokesman Zahir Azimi told reporters in Kabul.

“Using an army uniform against foreign forces is a serious point of concern not only for the Defence Ministry but for the whole Afghan government,” Azimi said, adding that President Hamid Karzai had ordered Afghan forces to devise ways to stop insider attacks.

It is very interesting that Azimi claims this probe of the Army began six months ago:

He said his Ministry started an investigation into the attacks, which are also called green-on-blue attacks, within the 195,000-strong Afghan army six months ago.

Khaama adds a bit of detail on the basis for expelling or detaining soldiers:

Ministry spokesman Mohammad Zahir Azimi did not provide any other details or specific numbers on Wednesday. He said many of the troops had been discharged from the military because they had suspect documents, either incomplete or forged. 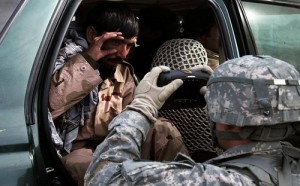 From the description by Reuters, it appears that the bomber attacked a screening point in Khost that was using the biometric scanner to screen civilians in the area. The biometric screening program is touted by NATO as a key tool in re-integration of former insurgents: END_OF_DOCUMENT_TOKEN_TO_BE_REPLACED