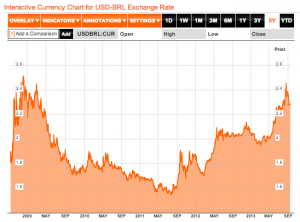 I was actually surprised, back in May, when the White House announced a State Visit for Brazil’s President, Dilma Rousseff.

After all, not long after Obama visited Brazil in March 2011, the real started gaining value against the dollar, significantly slowing the boom Brazil had enjoyed in the wake of our crash.

When she was here in April 2012, Dilma explicitly blamed US Quantitative Easing for the reversal in currencies, and suggested the policy was meant to slow growth in countries like Brazil. Before that, Brazil’s boom and its advances in energy independence had put Brazil in a position to assume the global stature a country of its size might aspire to. And Dilma (partly correctly) blamed US actions for undercutting that stature.

I interpreted the State Dinner to be an attempt to woo Brazil away from natural coalitions with the Bolivarist governments of Latin America and the BRICS (Brazil, Russsia, India, China, and South Africa).

Fast forward to today, when the Brazilian government announced that it has postponed the visit that had been scheduled for October 23.

The usual suspects are mocking Dilma’s decision, insisting that everyone spies, and that Brazil is just making a stink for political gain. The White House statement echoes that, suggesting that it was the revelation of US spying, and not the spying itself, that created the problems.

The President has said that he understands and regrets the concerns disclosures of alleged U.S. intelligence activities have generated in Brazil and made clear that he is committed to working together with President Rousseff and her government in diplomatic channels to move beyond this issue as a source of tension in our bilateral relationship.

There is something to that stance. Dilma’s government faces a lot of unrest and the tensions of preparing for the World Cup. The portrayal that the US was taking advantage of Brazil caught her at a politically sensitive time.

All that said, those poo-pooing Brazil’s complaints ignore the specific nature of the spying as revealed. As I noted, even James Clapper’s attempt to respond to concerns raised by the original reports in Brazil didn’t address (and indeed, may have exacerbated) concerns that the US is engaging in financial war, including manipulating its currency to undercut other countries as they rise in relative power. If the US is using its advantages in SIGINT to engage in such financial war, Brazil has every reason to object, because it’s not something Brazil’s currency or telecommunications position make possible.

US disclaimers of industrial espionage no longer matter if the US is collecting SIGINT that would support substantive financial attacks, especially since Clapper in March made it clear the US envisions such attacks (even if they only admit to thinking in defensive terms).

END_OF_DOCUMENT_TOKEN_TO_BE_REPLACED

I’m a big fan of Kevin Phillips’ arguments about how increased financialization of their economies lead to the decline of the Spanish, Dutch, and British empires in succession; his latest book warned that Wall Street crash might represent our tipping point. But I’ve been wondering what happens to a globalized world that is that financialized, as we have now. My impression is that it might be different this time around, partly because the world is so interconnected that most of the world has, for better or worse, been integrated into the same financialized system.

As James Galbraith described in his book Inequality and Instability, the the last several decades can be understood as the US first extracting wealth from the rest of the world, and only then turning to the American consumer to do to it what it had already done to developing countries.

First, the massive rise of inequality in the global economy from 1980 to 2000, with a peak in most countries–including the United States–in the millennial year, is a fundamental reflection of the concentration of income and wealth among the richest of the rich, and the corresponding financial fragility affecting everyone else. Crises, and especially debt crises, are thus not new or sudden; in global perspective we see that they have cascaded across the world for a generation, hitting Latin America and African in the early 1980s, the Soviet Union and its satellites in the late 1980s and through the 1990s, and much of Asia in the late 1990s.

Through this period inequality rose in the United States, but the prevalence of external crises also meant that the United States benefited throughout from its position as a refuge for capital. In the 1990s capital flowed in, especially to the benefit of investors in the technology sectors, whose investment euphoria produced a general nationwide prosperity right up to the initial crash of the technology sector–and its NASDAQ stock index–in March and April 2000.

The problem facing the incoming administration of George W. Bush in January 2001 was thus twofold. Externally, there was little scope remaining for extracting capital from the rest of the world. Every region that was open to crisis, with the possible exceptions of China and India, had already had one. Internally, the appeal of the major American leadership sector had worn out.

Galbraith describes how Bush tried first war and then American consumers to sustain growth, which brought about the financial crisis.

The financial crisis (and the world economic crisis it engendered) thus represented not so much the natural outgrowth of rising inequality as a further phase; it was the consequence of a deliberate effort to sustain a model of economic growth based on inequality that had, in the year 2000, already ended. By pressing this model past all legal and ethical limits, the United States succeeded in prolonging an “era of good feeling,” and in ensuring that when the collapse came, it would utterly destroy the financial sector.

In short, you can’t separate the current global system from the US efforts to sustain its financialized empire.

But the big players in the developing world are getting cranky with US efforts to sustain its hegemony over that financialized system.

The view was expressed by Wang Jisi, a high level Chinese insider, in this Brookings report documenting the roots of Chinese-American distrust (see also this NYT article on the report).

Since 2008, several developments have reshaped China’s views of the international structure and global trends, and therefore of its attitude toward the United States. First, many Chinese officials believe that their nation has ascended to be a firstclass power in the world and should be treated as such. China has successfully weathered not only the 1997-98 Asian financial crisis but also the 2008-09 global financial crisis; the latter, in Chinese eyes, was caused by deep deficiencies in the U.S. economy and politics.