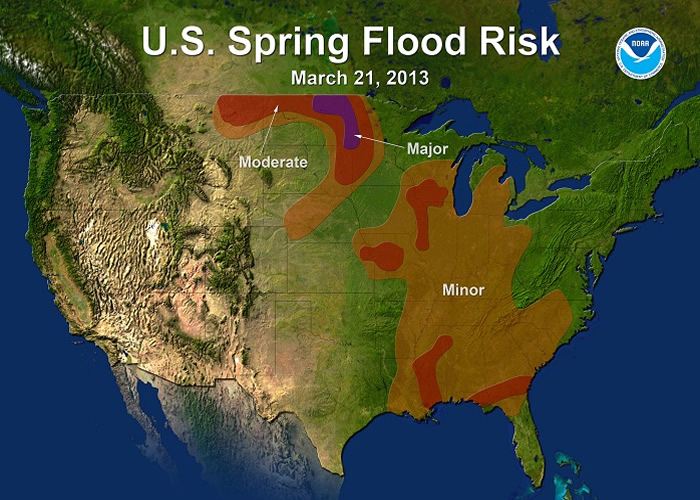 In contrast to headline news today, the weather seems perfectly harmless — until one looks carefully at these maps.

Though increased soil moisture levels may be a big improvement over this past summer’s drought, a serious problem remains: there’s been too much late snow and it’s going to melt quickly.

Based on the 21-MAR-2013 hydrologic map above, conditions along the Red River basin were quite bad; changes of major flooding were already predicted at that time. Since that report, the State Climatology Office at University of Minnesota recorded 4 inches of water (which includes 13 inches of snow) at their Twin Cities campus. This same station, however, received between 6-15 inches less snow over the last month than Fargo, North Dakota, located on the Red River.

The data used for the Percent Chance of Flooding map below is dated 15-APR-2013, before the final snowfall tally after The Weather Channel-branded winter storm “Xerxes” on 16-APR-2013. The area between Bismarck and Fargo received at least two feet of snow. 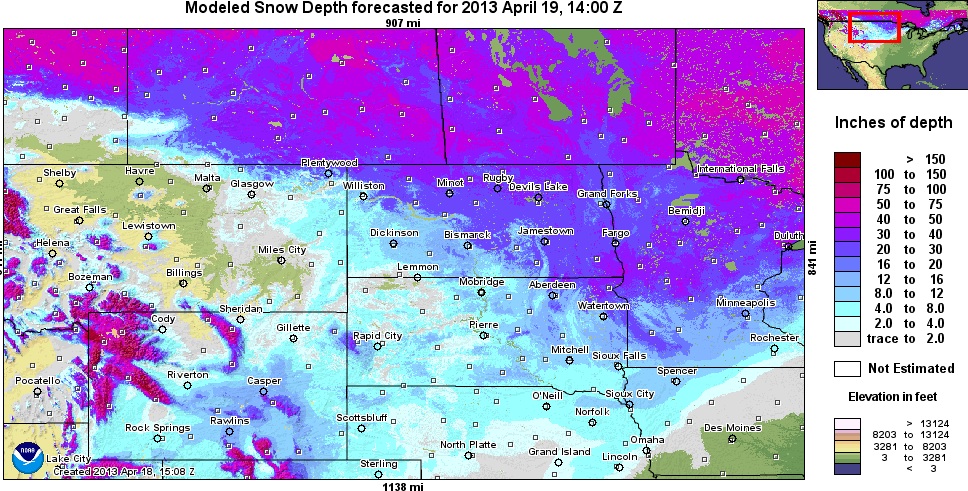 I’m no meterologist, climatologist, or hydrologist, but it sure looks to me like the chances of major flooding have increased from 80% to 100%. Just an uneducated guess on my part; I’ll also speculate flooding will accelerate within the next week-10 days without doing any additional research into the subject. (Hint: It’s called “spring.”) END_OF_DOCUMENT_TOKEN_TO_BE_REPLACED
https://www.emptywheel.net/wp-content/uploads/2016/07/Logo-Web.png 0 0 Rayne https://www.emptywheel.net/wp-content/uploads/2016/07/Logo-Web.png Rayne2013-04-19 12:01:402013-04-19 12:11:58April Snows Bring May Outrage: Record Flooding Ahead