Before Proud Boy Matthew Greene entered into a cooperation plea deal yesterday — the January 6 investigation event that generated a lot of press attention — something else happened that helps to explain the Greene (and most other) pleas thus far.

In a status hearing for Kurt Peterson, AUSA Alison Prout described that the government had offered Peterson a plea deal that she wanted to put on the record. He could plead guilty, Prout explained, to one count of obstruction, which would give him a guidelines range of 41 to 51 months. That compares to the sentence he faces if he were to go to trial on the other 7 counts, including a destruction of government property count, which Prout claimed might be 210 to 262 months. Prout claimed there had even been a meeting in Louisville to discuss such a deal and explicitly acknowledged the plea would include cooperation.

Only after that did Peterson’s attorney, Laura Wyrosdick, ask that the hearing — which I had just tweeted out in real time — be sealed to hide the discussion of cooperation.

Whatever effect Prout’s comments will have on her ability to finalize a plea deal with Peterson, she has confirmed something I pointed out when Graydon Young pled guilty. The government is using the terrorism enhancement that can come with 18 USC 1361 charges for damage to government property to convince people to plead to the obstruction charges and gain their cooperation. And because Peterson broke a window while at the Capitol, such a deal will look preferable by comparison. 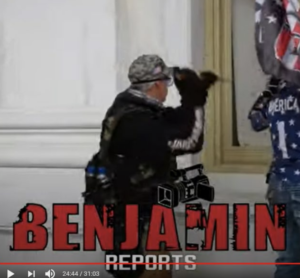 It’s unclear what the government believes he can offer in cooperation (though the meeting in Louisville suggests he has already proffered testimony). On Facebook after the riot, he revealed he, “was with 3 men who had served our country in special forces. All of us in our sixties. They were patriots and not an [sic] anarchists.” Thus far, just two Special Forces veterans, Jeffrey McKellop and Jeremy Brown, have been arrested so far. McKellop would likely would be younger than his 60s (he completed 22 years of service in 2010) and I think Brown would be too. So it may be DOJ has an interest in Peterson’s co-travelers.

It’s also possible DOJ wants Peterson’s testimony about the attempts to break into, first, the House Chamber and then the Speaker’s Lobby. He was present as Ashli Babbitt was killed (and claimed to be calling the crowd to stop, though that doesn’t show up on the video I’ve seen). He’s not being prosecuted by AUSA Candice Wong in the group of men from that scene that seem to be clustered together. If that’s the case, then the government would be seeking to use the testimony of someone who had himself damaged the building to help prosecute men (at least Zach Alam, the guy who punched through the Speaker’s Lobby door) who likely do merit a terrorism enhancement for their efforts to hunt down members of Congress.

We’ll see whether Peterson ultimately decides to cooperate. But a similar calculation seems to have convinced Matthew Greene to flip on his Proud Boys.

Greene was charged, along with Dominic Pezzola and William Pepe, in what I call the “Front Door Proud Boys Conspiracy,” for the way the three of them worked towards Pezzola’s breach of a Northwest window, the first breach of the building on January 6. Greene was charged with conspiracy to obstruct the vote count (18 USC 371), obstruction (18 USC 1512(c)(2)), civil disorder (18 USC 231), destruction of government property (18 USC 1361, the charge that can carry a terrorism enhancement), as well as three trespassing counts.

His plea agreement shows that he pled to conspiracy — which the plea agreement claims included both obstruction and civil disorder (the first indictment did include both) — and the obstruction charge. Rather than a separate charge for vicarious responsibility for Pezzola’s break of the window (on an abetting charge), that liability is added to the obstruction charge as an “offense involving property damage.” At the hearing yesterday, it was said his guidelines range would be 41 to 51 before accounting for the cooperation.

That is, Matthew Greene made effectively the same deal that Peterson is contemplating, though he was probably working from a much higher guidelines range because of the additional civil disorder charge, not to mention possible weapons violations based off an AR-15 seized at his arrest.

Curiously, Greene’s written plea agreement still permits the government to request a terrorism enhancement under U.S.S.G. § 3A1.4, n. 4, which normally is being taken out of cooperation plea deals. But the entire proceeding yesterday was dismayingly discombobulated, with the plea itself just signed by Greene’s attorney and some clauses in the elements of the offense requiring tweaking. So it’s possible the prosecutors just used boilerplate and forgot to take that out. Greene’s attorney, Michael Kasmarek, spoke about the detailed discussions he has had with prosecutors, so he seems to trust them, but I’d still make sure everything were better captured in writing.

Greene’s deal differs from others thus far in that he’s moving immediately to sentencing on March 10 (he’s the only publicly identified cooperator in custody), with the understanding that even after sentencing the government may file for another downward departure while he serves his sentence.

The plea agreement contemplates the possibility of witness protection.

Update: Gina Bisignano’s August plea agreement has now been released. She, too, dodged the property damage crime by cooperating. She also faces the same 41 to 51 month sentence.