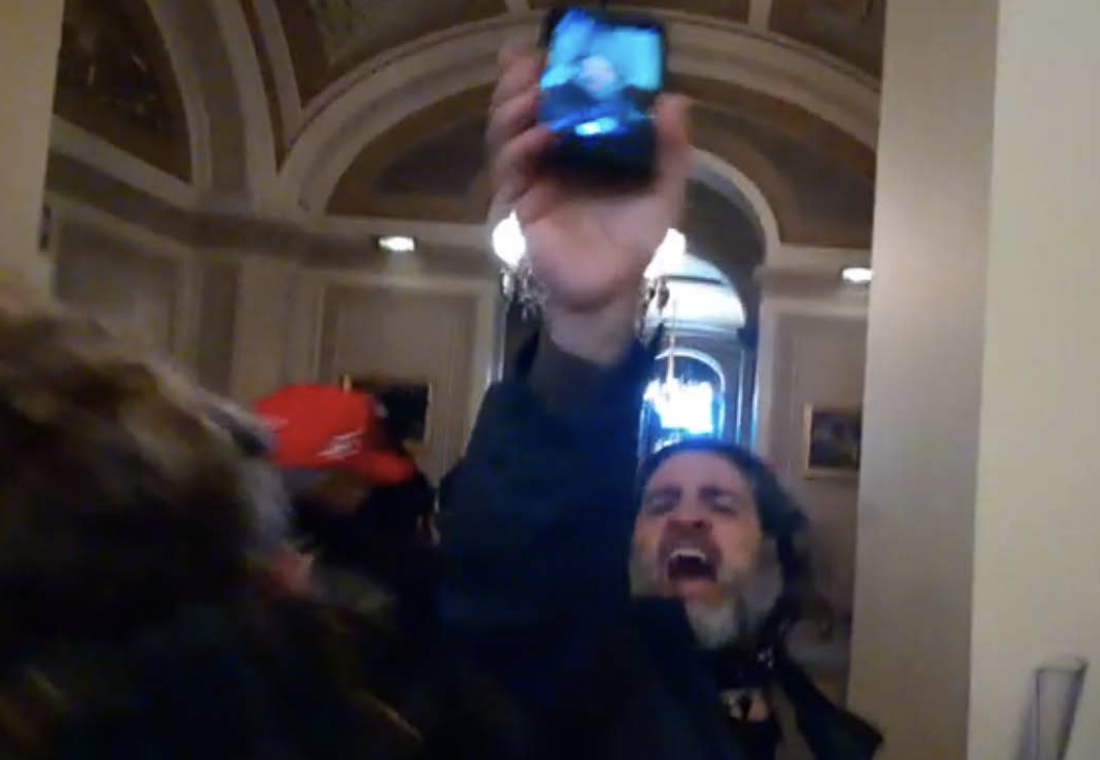 Were the Proud Boys using livestreams for command and control?

I’ve had this question more generally: whether someone offsite from the Capitol was providing Command and Control guidance for the assault on the Capitol. But the new “Leadership conspiracy” indictment against Ethan Nordean and Joe Biggs mentions that Gabriel Garcia — along with Joshua Pruitt — were among those who charged on the Capitol in the first wave, along with Dominic Pezzola.

That, by itself, makes me wonder if DOJ is going to expand that “Front Door” conspiracy to include Garcia and Pruitt.

But the content of Garcia’s charging document raises more questions for me.

Garcia is a former Army Captain, so one of the higher ranking former veterans among the Proud Boy defendants. He may have been IDed by what we now know was a request that Facebook provide the IDs associated with all the livestream video uploaded during the insurrection from inside the Capitol (indeed, it was Garcia’s complaint that first led me to suspect the FBI had used one).

In the video, GARCIA is walking east on Constitution Avenue towards the Capitol building with a large group of people. 2

Approximately 20 minutes later, at 19:19:08 UTC, or 02:19pm, GARCIA uploaded to Facebook a video filmed from inside the Capitol building:

Proud Boys Nicholas Ochs and Nicholas DeCarlo can be seen in the background recording the unlawful conduct with their phones and other devices.

While their arrest documents don’t show the two livestreaming on Facebook (and Ochs would later complain about the connectivity inside the Capitol), if they were livestreaming somewhere, it would mean live video of tactically important moments from the siege would have been available to someone outside the Capitol or even someone watching more remotely, from a hotel room or even Florida.

Certainly, Garcia’s stream would be operationally useful if someone were providing command and control remotely. Was someone?

Does DOJ now have a list of all the teams from the Telegram channels?

The latest detention motions for Ethan Nordean and Joe Biggs (as well as the Leadership Conspiracy indictment) describe the process of divvying up the Proud Boys in attendance into teams, which process involves an unindicted co-conspirator who presumably is cooperating.

January 4, 8:20 PM, unindicted co-conspirator: “We had originally planned on breaking the guys into teams. Let’s start divying them up and getting baofeng channels picked out.”

January 5, 9:30 to 9:32 AM, Biggs: “What are the teams. I keep hearing team [sic] are picked already.” A few minutes later, [Biggs] stated “Who are we going to be with. I have guys with me in other chats saying teams are being put together.”

The replication of these Telegram chats, from two different channels, stops at 10AM on January 6 (they presumably continued after that time, but we know that Nordean’s phone was turned off during the day).

That suggests DOJ is likely to know what the various teams were and who led them. There were 60 people on the participants’ Telegram channel from that day, which means they may have a lot more teams to indict.

Who paid for the vans from Florida to DC?

Particularly given that these vans were from Florida — where Tarrio, Biggs, and the key figures from the Oath Keepers all hung out (and hung out with Roger Stone) — the person that paid for these things may be on the hook for any conspiracy ultimately charged as a whole.

What kind of cooperation will DOJ get from the Front Door co-conspirators?

As of right now, just Dominic Pezzola and William Pepe are charged in what I call the “Front Door” conspiracy — the group of people who first breached the Capitol on the west side of the building. As noted above, DOJ itself identified Garcia and Pruitt to have some tie to this group (which makes me wonder if an expanded conspiracy obtained Friday will be released before I’m done with this post!).

But DOJ has not included Robert Gieswein or Ryan Samsel, who were also part of this initial assault. Neither is described as a Proud Boy in their charging documents, but both were with the Proud Boys before the operation. Both men are also on the hook for fairly serious assault charges (a cop that Samsel pushed over got a concussion and Gieswein brought a bat he used). Samsel has not been indicted and the joint request for a continuance (filed way back on February 17) explaining why explicitly states the two sides are seeking a “resolution,” (that is, a plea deal).

The government and counsel for the defendant have conferred, and are continuing to communicate in an effort to resolve this matter.

As to Gieswein, he has been indicted. But his docket has none of the proceedings that cases moving towards trial would have, such as a motion for a protective order (though given the delays on PACER postings that doesn’t definitely mean anything). And well after his magistrate docket in Colorado was closed, he submitted several sealed filings to it.

If I were someone that the government had dead to rights with not just brutal assault, but assault that was tactically important to the success of the entire operation, particularly if I had a criminal record that would add to prison time at sentencing (as Samsel does), I would sure want to help prosecutors assign some responsibility for those assaults to those who guided my actions on that day. Thus far, assault is not included in any of the conspiracy indictments (it is individually charged against Pezzola and a threatened assault was charged against William Chrestman), but if it were, it would raise the stakes of them significantly.

I’m also interested in the case of Chris Kelly. He’s not a Proud Boy. But in advance of his trip, he made it public that he was traveling to DC from NY with some members of the Proud Boys.

I’ll be with ex NYPD and some proud boys. This will be the most historic event of my life.

Kelly also made it clear the NYPD officer was his brother.

The Kelly Facebook Account also shows on January 2, 2021 KELLY messaged another user and stated, “Me and [NAME] plus a couple of others are headed down the 5th and staying 2 nights. Ill be frequency 462.662 on a ham radio if cell service goes down.” Public records databases also revealed Christopher M Kelly has a brother (“S1”) of New City, New York with the same first name used in the above statement. New York City Police Department records confirm S1 is a retired police officer. Based on this statement, and the statement above about traveling with “ex NYPD and some proud boys” your affiant believes that this comment indicated that KELLY planned to travel to Washington, D.C. with S1.

We still don’t know who a cooperating witness against Pezzola and Pepe is, who described to the FBI, almost immediately, a conversation promising that the Proud Boys would have killed Mike Pence had they found him that day. Pezzola had suspected that it was the guy who first recruited him into the Proud Boys and further speculated the conversation reported by the witness occurred on the trip home (which would help to explain how Pepe, also from NY, got included in conspiracy charges with Pezzola). That is, Pezzola believed that the cooperating witness must have been in a car with him from DC to NY.

But the government revealed that they are not prosecuting this cooperating witness.

Kelly can’t be that witness. He had already been charged at the time. But unless I missed his arrest, Kelly’s brother might be. And if his brother were cooperating (which would require honest testimony about what brother Chris had done), then it would raise the chances that Chris Kelly would be too. And why not? If I had traveled to DC with the people who initiated the entire insurrection, I’d want to make damned clear that I wasn’t part of that. Like Samsel, Kelly has not been indicted (publicly) yet.

For some time, the government had been saying they weren’t prepared to make plea deals yet. The inclusion of Co-Conspirator 1 in the Leadership indictment strongly suggests that’s done. And if Samsel and the government were discussing a plea over a month ago, you can be sure he has already proffered testimony to the government.

So the government likely has some cooperators in the “Front Door” conspiracy. The question is only, how much?