The House Intelligence Committee continues to fight with Fusion GPS over records and testimony. Most specifically, they continue to fight over how many of Fusion’s bank records it should have to turn over. Yesterday, HPSCI submitted a filing that suggests a number of fairly inflammatory things about Fusion’s work, most notably that they may have paid up to four journalists and/or researchers besides Steele in conjunction in relation to topics relating to Russia, if not the dossier.

HPSCI is currently asking for: 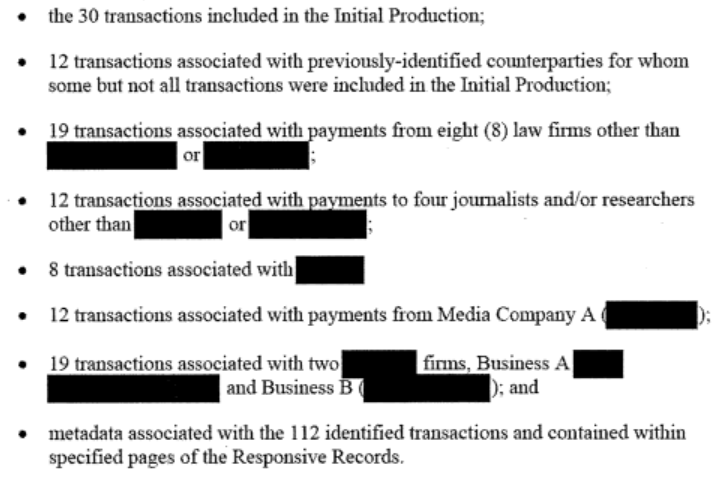 The context in the declaration from Scott Glabe suggests the following about these requests.

The 30 initial transactions would relate to Perkins Coie and BakerHostetler, as well as the payments to Steele’s firm, though a redaction elsewhere suggests there are 6 counterparties total that Fusion has already provided records on.

HPSCI is interested in the law firms because of the way Fusion’s true clients (the Democrats and Prevezon, for example) have had law firms pay Fusion to hide their role in the project. It wants to know if those 8 law firms served as cut-outs for other Russian related work.

It is interested in Business A because it might pertain in some way to “links between Russia and individuals associated with political campaigns or any other U.S. person,” particularly some policy matter at issue in the inquiry/reflected in the dossier. HPSCI is interested in Business B because it may pertain to collusion between Russia and the Trump campaign.

With regard to journalists or researchers, Fusion has apparently already provided records related to one journalist or researcher. HPSCI is seeking records pertaining to three more. Given the reference, below, which seems to suggest an earlier redacted reference to Mother Jones, I don’t rule out the earlier one being David Corn or someone else from Mother Jones, and MoJo has a specific effort associated with Russia coverage. The 8 transactions mentioned must pertain to payments from Beacon, which funded the early work on the dossier.

The 12 transactions appear to involve payments from Yahoo to Fusion, based on the following passage:

Mind you, I don’t understand why Yahoo would be paying Fusion if they were at the same time publishing its dirt. But the allegation is of particular interest given the way Michael Isikoff’s September story has been a central self-referential piece of “proof” dossier boosters always rely on to prove its value.

First, note that Sipher relies on “renowned investigative journalist” Michael Isikoff to validate some of these claims.

Renowned investigative journalist Michael Isikoff reported in September 2016 that U.S. intelligence sources confirmed that Page met with both Sechin and Divyekin during his July trip to Russia.

A June 2017 Yahoo News article by Michael Isikoff described the Administration’s efforts to engage the State Department about lifting sanctions “almost as soon as they took office.”

Among the six journalists Steele admits he briefed on his dossier is someone from Yahoo.

That the Yahoo journalist is Isikoff would be a cinch to guess. But we don’t have to guess, because Isikoff made it clear it was him in his first report after the dossier got leaked.

Fusion is claiming a First Amendment interest in keeping this all hidden. Me, I’m actually a bit interested in which journalists and researchers were getting and giving Fusion money.