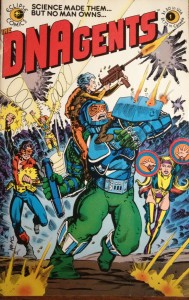 I’ve held onto this nifty comic for 30 years, knowing it would come in handy some day.

My high school days were filled with intrigue and controversy at the national level. On the political front, the Watergate scandal was playing out, with Nixon resigning in the summer between my junior and senior years. Another drama was also playing out at that time, but I only became fully aware of it a few years after its most dramatic events. In July of 1974, only a month before the Nixon resignation, a remarkable publication (pdf) appeared in the Proceedings of the National Academy of Sciences. First, the paper is remarkable for its lack of an author byline. The members of the committee who authored the publication are listed at the very end. More remarkable still is that the publication marked the announcement of a voluntary moratorium by biological scientists. Several types of constructs using newly developed gene-splicing capabilities would not be attempted until the group had more fully studied the risks involved and come up with a plan for mitigating these risks.

Just under a year later, a follow-up publication (pdf) in the same journal appeared. This time there was an author list (and they finally let a woman join the authors–Maxine Singer had been involved in the discussions all along but was not listed in the 1974 paper). The risk mitigation strategy proposed in this paper has set the stage for the bulk of the work with recombinant DNA that has followed (and which allowed me to get a PhD in Molecular Biology in 1983). In the 1975 paper, Paul Berg and colleagues described a graduated level of biological and physical containment of organisms generated in recombinant DNA experiments, with the level of containment based on the relative risk perceived for the new DNA combinations that were being generated.

It should be noted that the concept of working with dangerous biological organisms was not new at all. Infectious diseases have been studied throughout the history of medicine and so the concept of biological containment of dangerous pathogens was not new to these scientists. They relied on these established practices of containment, which have continued to evolve into the current containment guidelines such as those published by the Centers for Disease Control (pdf) for containing pathogens.

Work with recombinant DNA took off quickly once the moratorium was lifted and a number of wonder drugs are now in use through this technology. Engineered plants are also in widespread use in agriculture, but implementation at least in the case of Bt corn has been mismanaged to the point that resistance is beginning to break out.

Fast forward to my impending old age and a very different sort of moratorium reared its head in a very ugly way in December of 2011. END_OF_DOCUMENT_TOKEN_TO_BE_REPLACED