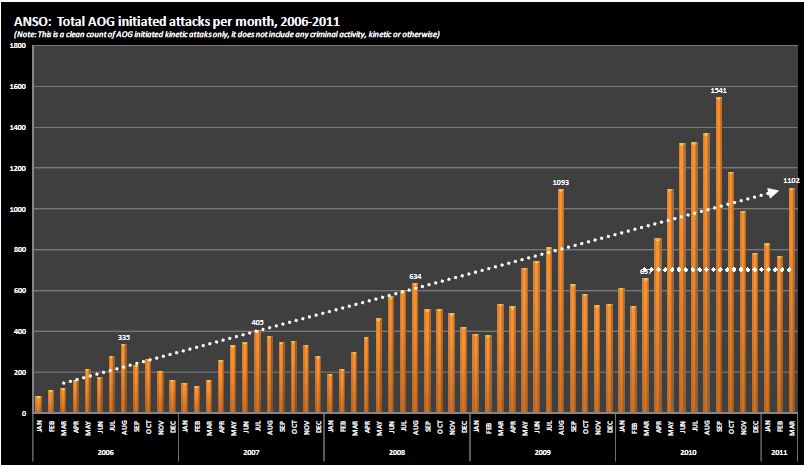 If there were only one thing I could ask you to take away from this rather lengthy brief, it would be this one page. Below you see charted over time, the rising violence from the end of 2005 through the first quarter 2011 (chart source: ANSO, 2011). All spin aside, you see regardless of who was in command, what strategy they used, or what claims they made, nothing impacted the rising arc of violence from 2005 through today. The one thing, however, that has never changed: the upward arc of violence, which continues its rise and is expected to continue at least through this summer. END_OF_DOCUMENT_TOKEN_TO_BE_REPLACED

When separate classified reports casting doubt on the military’s claims of progress in the Afghanistan war were discussed in the New York Times on January 20 and then by BBC (and Times of London) on February 1, my response to both incidents was to blame upper-level military figures for releasing the damaging information in order to reach the higher goal (for them) of maintaining the war effort in Afghanistan beyond the planned hand-off to Afghan forces. The timing seemed to fit well with a hope on their part that Republican presidential candidates would grab onto a campaign promise not to end the US war effort. However, after the second leak, I did receive one third- or fourth-hand report suggesting that it had been leaked by senior military officer upset by the lack of progress in Afghanistan who most definitely did not aim to prolong the war effort there.

With the publication of a story about him in today’s New York Times and publication yesterday of his own statement in the Armed Forces Journal, Lt. Col. Daniel L. Davis becomes the first mid-level officer willing to speak out about the lack of progress in Afghanistan and the military’s insistence on painting a false picture of success. [It should be noted up front that it seems quite unlikely Davis is behind either of the earlier leaks, as evidenced by the steps he has taken to separate public from classified information in the actions he has taken.] The Times article, titled “In Afghan War, Officer Becomes a Whistle-Blower”, describes the actions Davis has taken:

Since enlisting in the Army in 1985, he said, he had repeatedly seen top commanders falsely dress up a dismal situation. But this time, he would not let it rest. So he consulted with his pastor at McLean Bible Church in Virginia, where he sings in the choir. He watched his favorite movie, “Mr. Smith Goes to Washington,” one more time, drawing inspiration from Jimmy Stewart’s role as the extraordinary ordinary man who takes on a corrupt establishment.

And then, late last month, Colonel Davis, 48, began an unusual one-man campaign of military truth-telling. He wrote two reports, one unclassified and the other classified, summarizing his observations on the candor gap with respect to Afghanistan. He briefed four members of Congress and a dozen staff members, spoke with a reporter for The New York Times, sent his reports to the Defense Department’s inspector general — and only then informed his chain of command that he had done so.

The statement in the Armed Forces Journal opens in this way:

I spent last year in Afghanistan, visiting and talking with U.S. troops and their Afghan partners. My duties with the Army’s Rapid Equipping Force took me into every significant area where our soldiers engage the enemy. Over the course of 12 months, I covered more than 9,000 miles and talked, traveled and patrolled with troops in Kandahar, Kunar, Ghazni, Khost, Paktika, Kunduz, Balkh, Nangarhar and other provinces.

What I saw bore no resemblance to rosy official statements by U.S. military leaders about conditions on the ground. END_OF_DOCUMENT_TOKEN_TO_BE_REPLACED

As Burris’ allies (and the Politico) would have it, the source of Burris’ current problems is his crappy PR strategy.

Here’s his former media relations guy, Bud Jackson, disclaiming any responsibility for his recent woes (Jackson worked with Burris until he became Senator).

As many of you may recall I actively helped my former client, Roland Burris, during his run-up to being successfully seated in the United States Senate.

Since that time, well … his team’s public relations efforts have been less than stellar. Turns out that, because my business is political communication, I need to let folks know that I have not been involved in the decisions that have led to the public relations fiasco over the past week. In fact, I actively counseled his team to take very different actions, to no avail…

I know based on my own private conversations and experience that Senator Roland Burris has been the victim of bad advice and, when set-up to fail, he certainly shall we say, has had less than adeqaute attempts to better and more clearly inform the public at a press conference, or two. It has ben painful to watch. Regardless, the senator has more than 30 years of public service and his integrity has never been questioned. [empahsis original]

And here’s the Politico’s "news" story explaining that Burris’ problems all stem from bad media strategy.

But it was the way the situation was handled by Burris and his advisers — trapped between competing political and legal demands — that has made the problem much worse and has pushed him to the brink of losing his seat. In multiple interviews, several Senate aides and Burris confidants say the senator was unprepared from a public relations and political perspective to deal with the national media frenzy and ethics problems he now confronts.

Absent an aggressive communications strategy, the press and the public have formed their own opinions that the senator got his new job on false pretenses. As his support crumbled, Burris made a calculated decision not to rile up his backers — many of whom are black — for fear that it would create a vicious racial debate. But this decision has made him appear completely isolated politically, with virtually nobody in Illinois or Washington speaking up for him.

END_OF_DOCUMENT_TOKEN_TO_BE_REPLACED

I just reviewed Burris’ testimony before the impeachment committee. I was struck by Sam Adam Jr.’s efforts to orchestrate a wiretap that might exonerate Blago of any charges he attempted to sell the Senate seat for personal gain. Here’s what happened.

December 26, afternoon: Sam Adam Jr., a Blago lawyer who may or may not be part of Blago’s defense team, called Burris and told him he had something urgent to tell him. Burris was curious what he had to say, so–even though he was preparing for a black tie event, told him to come over. Presumably, even if Adam called from Blago’s tapped phones, this conversation would be minimized bc of attorney client privilege.

December 26, 4PM: Adam shows up. They have a conversation. Since it occurs in a place presumably free of wiretaps, we only have Burris’ version.

December 28, 4PM: Adam shows up to Burris’ house again. Same thing: presumably this conversation wasn’t tapped, so we only have Burris’ version.

December 28, shortly thereafter: Blago calls Burris and offers him the seat. Blago goes on at some length (per Burris’ description) listing Burris’ qualifications. Gosh. It’s as if Blago were performing an honest offer for the Senate seat, complete with listing all the reasons Burris is qualified. This conversation is on tape, and will make a nice trial exhibit to prove that Blago really was only trying to appoint someone qualified for the seat, and not seeking personal gain for it.

December 30: Blago announces the pick in a joint press conference. I find the delay interesting; something I’ll come back to.

Isn’t that all neat and tidy? What I find particularly interesting is how it matches up with what we know of the offer Blago made to Danny Davis before he made an offer to Burris.

December 24 morning; Davis and Sam Adam Jr. meet in Davis’ Chicago office. This conversation would not only not be tapped, but would be protected by legislative privilege. Like Burris, Davis had previously said he would not accept the spot, but he heard Adam’s offer anyway:

Davis said he was told "the governor would like to appoint me to the vacant spot." After Blagojevich was arrested Dec. 9, Davis, who sought the appointment from him when he thought Blagojevich was playing it straight, said he would not take the job if offered. END_OF_DOCUMENT_TOKEN_TO_BE_REPLACED