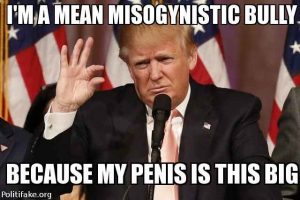 The Washington Post’s David Fahrenthold has come up with another scoop. While scraping for video clips does not seem to be Fahrenthold’s strength, like the KFile boys who bolted Buzzfeed in the middle of the night for the apparently greener pastures of CNN, this clip posted by the Washington Post is bigger than anything that has come before. It doesn’t matter if it is by weight, timing, or the clear combination of the two, it is simply huge. Game changing.

The most striking thing, however, is not that this video exists, nor that it has emerged to public view, it is that the Republican party worthies and press seem to think it is shocking. Seriously, this information, and the Donald Trump it reflects, is exactly who Donald Trump is, and has been, for decades.

Donald Trump is a once and forever informationally ignorant, self serving jackass extreme narcissist. But he has been that for decades to anybody paying attention. Trump was the leader from the start in the Republican primary, and was the easy winner of their nomination. Why? Because the votes on the ground count, much to the consternation of supposed “sane party elders”, and the votes on the ground made Trump an easy winner. He is exactly what the current Republican GOP party embodies at its heart.

Watching holier than though instant moral compasses (well oiled craven weathervanes?) like Jason Chaffetz, Mitch McConnell, John McCain, Mitch McConnell, Orrin Hatch and Paul Ryan squirm and proclaim their shock, like grubby kids with their hand stuck in the cookie jar, is hilarious. What convenient souls they are to suddenly have the inclination of what they have all sowed and reaped for years. They doth protest too much; Trump is them, and they are Trump.

I came home late, but still managed to hear at least two tellings of the story of how John Rhodes, Barry Goldwater and Hugh Scott went down the Hill and gave the hook to Nixon when it was time, with the ideation that such a similar scene could end the Trump moment now. Those are the crazy fever dreams of people like Chris Matthews, David Gergen, Mark Halperin and the rest of the Beltway cocktail weiner gobblers.

Not gonna happen. Rhodes, Goldwater and Scott were men of a different time and more stout character. There are no analogues today. Jason Chaffetz and Mike Lee can conveniently preen and bluster all they want. It is bullshit, as it is with almost all of the rest of today’s Republican party. They do NOT get to suddenly walk away from the monster their party has spent decades creating. They own Trump, Hannity, Roger Ailes, Fox News, Breitbart and Limbaugh. It is who they are, and nobody should forget it.

The Republican party of today has relentlessly stood against women’s rights and ability to control their own bodies, equal rights and protections for LGBT citizens, fair treatment for minorities and immigrants, and the right to vote for anybody other than middle aged fat white men. The current Republican party think that they are the only “suspect class” due “equal protection”, and not the minorities, races, genders, sexual identities and other endangered classes the civil rights laws were designed to protect.

This is exactly what makes the instant kvetching in the GOP aisle over Trump last night so fatuous. It is a boatload of opportunistic self serving fraud. Not for one second should anybody accept that Trump is the sudden exception, he is unequivocally what the GOP has been growing into for years. The modern Republican party has long championed racism, bigotry and misogyny; Donald Trump is just the point of their spear. To the extent there are any “honest brokers” left in the GOP, they are still guilty of benign neglect that allowed the ugliness that is the Trumpian GOP to fester.

The GOP cannot run from Donald Trump, he is who they are now. The last minute panicked contrition of the very women blaming and shaming, racists, bigots and oligarchs that claim to speak for the GOP cannot shed the snake skin of who they are, and what they have created.

Oh, and by the way, the fever dreams of the Chris Matthews and Mark Halperins of the pearl clutching Beltway set are not going to get their wish. It is too late for Trump to be replaced on the ballot by the grand poohbahs of the GOP. As election litigator extraordinaire Marc Elias points out, the ballots for the military and overseas voters have already been sent out pursuant to the UOCAVA, i.e. the Uniformed and Overseas Citizens Absentee Voting Act. Locally, the Arizona ballots are putatively at the printers and being mailed out within five days. Many other states are either on that timetable or ahead of it. In short, the voting has begun. The die is cast.

Also, via Philip Bump and Dave Weigel of the Washington Post:

More than 34,000 Republican voters have already cast their ballots for the 2016 general election according to the U.S. Election Project, 8,000 of them in the battleground state of North Carolina and another 5,000 in Florida. Not all of those ballots were cast for Donald Trump, it’s safe to assume, but it’s more than likely that most of them were. And that, in a nutshell, is why it’s far too late for the Republican Party to dump Donald Trump from their ticket.

More from Bump, Weigel and the WaPo:

Josh Putnam, a University of Georgia lecturer and expert on the machinations of the parties, told me at the time that the rule at issue was Rule 9. Rule 9 reads:

Death, declination or otherwise. No “because we want to” clause.

“Let’s be clear here: The rule is intended to fill vacancies, not to lay the groundwork for a replacement,” Putnam said. “Some have speculated that ‘otherwise’ is ambiguous. Taken out of context it is. However, under the provisions for filling vacancies, it clearly fills in any gap between death and declination (i.e.: an incapacitating illness, but one that leaves the nominee neither dead nor able to decline to run further). And that was the intention.”

Weigel and Bump are superb reporters, and put up a compelling article on a short deadline. But, when it comes to election law, there is nobody better than Rick Hasen. Rick actually contemplated this scenario back in August, over two months ago, when the switch would have been far easier than it is now with ballots already outstanding. His conclusion was that it would be beyond difficult. And that was then, much less now.

But what if the ballots stood as is, could the GOP “electors” find the unanimity to cast enough electoral votes for some person other than Trump? Hasen, at his excellent “Election Law Blog” linked to some thoughts on that effectively imaginary scenario by Ned Foley:

As I write this on Friday night October 7, there is renewed talk of GOP leadership disavowing Trump. True, Trump will still be on the ballot that we citizens cast. But suppose the GOP leadership publicly announces that it will ask GOP electors, when they meet and vote on 12/19, to cast their presidential vote for Pence. Then some GOP-leaning superPACs spend a lot money before 11/8 informing voters of this plan.

Suppose this plan is successful, insofar as it causes on Election Night, 11/8, the media to announce that GOP electors were chosen in enough states to amount to 270 Electoral College votes. Then on 12/19, the GOP electors all do as intended according to this plan: they cast their official Electoral College votes for Pence, not Trump. Pursuant to 3 U.S.C. 9-11, these electors all sign their certificates showing Pence as their choice and send the certificates to Joe Biden, as President of the Senate.

What would happen when Biden receives two conflicting sets of Electoral College votes from some states, one set for Pence, and the second set for Trump?…

Long story short: There is no way out from Trump for the GOP. They are stuck, and they got there the old fashioned way: they earned it. The Republican Party cannot hide form this event or pretend it is a mistake. It is the culmination of where the Republicans have been headed since the days of Nixon and Lee Atwater. The GOP has tried to mask it with duplicitous bleating about social conservancy and family values, but the truth is out now. It is all about preservation of white bigotry and privilege, and shifting of income and wealth to oligarchs and corporations. When Trump feigned to support that, and the maintenance of women in second class subservient status, the Republican party was willing to ride that horse. Now they want off. Don’t let them.

It is time for change, and that will not, and cannot, be furthered by letting the party of bigotry, hate, misogyny and income inequality off the hook because their avatar has been exposed.. Make them own what they built and earned. 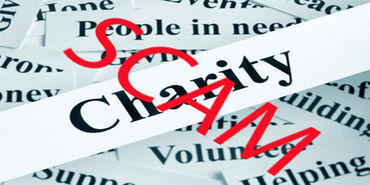 One of the items of breaking news (no, really!) over the last 24 hours is the cease and desist order issued by the New York Attorney General’s Office to Donald Trump’s vaunted “charity”. The full text of the official letter can be found here.

The letter, which was sent on Friday and released on Monday morning by Mr. Schneiderman’s office, said its charities bureau had determined that the Donald J. Trump Foundation had been fund-raising in New York this year when it was not registered to do so under state law.

“The Trump Foundation must immediately cease soliciting contributions or engaging in any other fund-raising activities in New York,” wrote James Sheehan, the chief of the charities bureau.

I want to focus on one particular clause in the letter however. The part identifying the “fraud”. To wit:

“The failure immediately to discontinue solicitation and to file information and reports required under Article 7-A with the Charities Bureau shall be deemed to be a continuing fraud upon the people of the State of New York.”

Now, in fairness, that is likely boilerplate/template language for such a cease and desist letter in New York, but that makes it no less true. What has occurred is that the Donald J. Trump Foundation, by not properly registering and being accountable for its activities, has been perpetrating a fraud on the People of the State of New York.

A state government is entitled to regulate, oversee and audit such activity occurring within its borders. As appears to be a pattern with Mr. Trump, he and his organization seemed to think they were simply above such common regulation. The willful non-compliance itself is a fraud, the size of the fraud perpetrated can only further be determined via full registration and full accounting for the multiple years of non-compliant activity the “charity” has engaged in.

There has been a fraud under the statutory and regulatory framework of the State of New York, we are only yet to ascertain the relative scope of it yet. And given the dogged reportage of David Fahrenthold of the Washington Post, which depicts rampant self serving and dealing by Trump as to personal debts via his charity, there is every reason to believe there are very serious issues to be dealt with.

But the ability of the NY Attorney General’s Office to actually deal with these questions depends on the prompt registration and disclosure by Trump of his offending and illegal charity.

Trump and his ill begotten “charity” have 15 days to comply with registration and disclosure. What do you think the odds are he will actually comply in good faith instead of hiding behind some bogus baloney, or submitting patently non-responsive filings, until after the election is over? I’d rate the odds at 100%.

The same odds that exist for Trump turning over his tax returns. Even the one from 1995, that has been beyond the statute of any limitation, whether criminal or civil, for over 15 years.