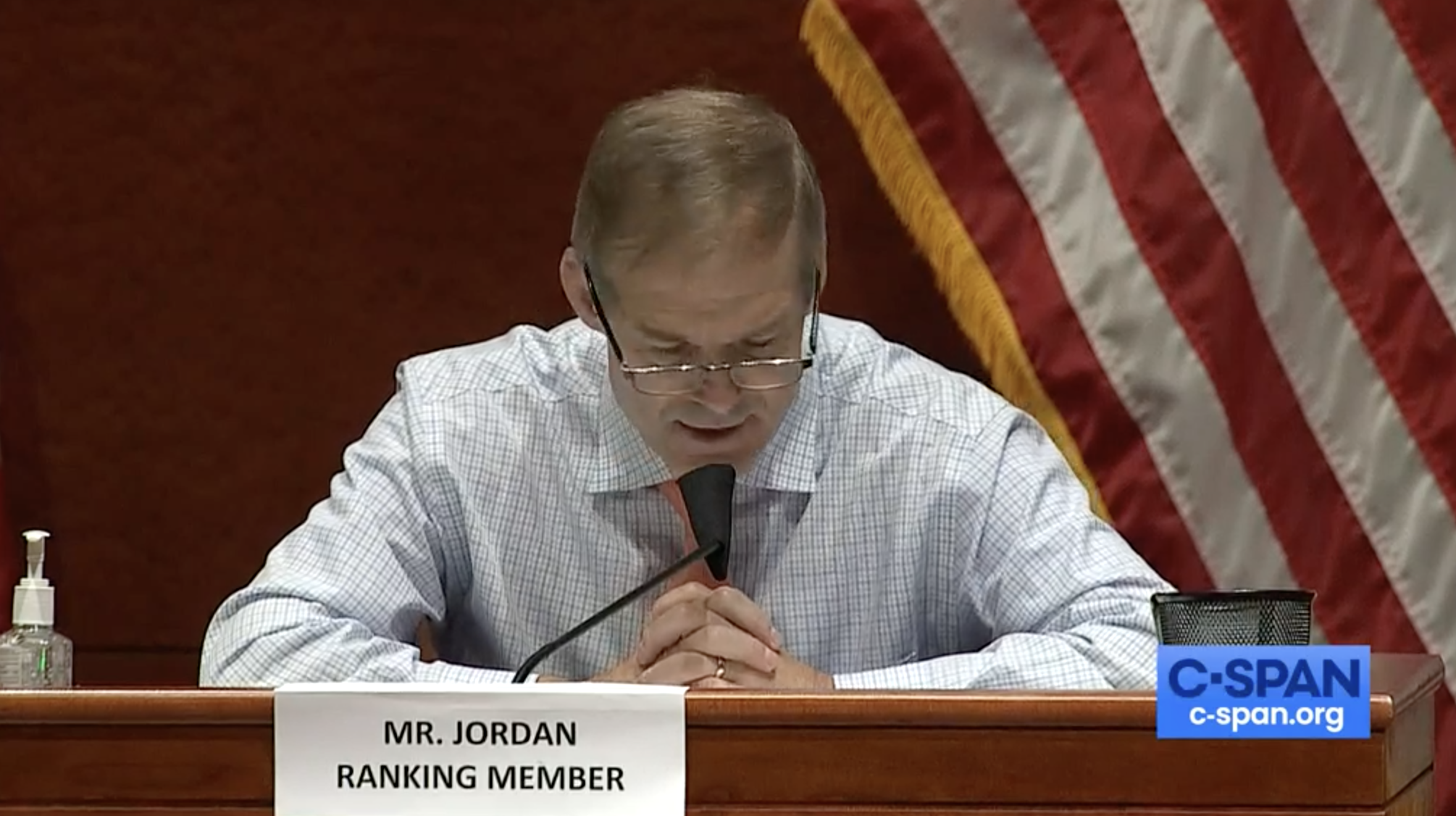 But his normally obtuse manner of engagement didn’t undermine the dual threat he posed in today’s hearing on the ways Billy Barr is politicizing justice. Democrats failed to get him to abide by the committee rule that he wear a mask when not speaking (not even while sitting in close proximity to Jerry Nadler, whose wife is seriously ill). At one point, Debbie Mucarsel-Powell called him out on it. But Republicans on the committee thwarted the means by which Nadler was enforcing the rule — which was to not recognize anyone not wearing a mask — by yielding their time to Jordan.

Jordan used the time he got to attack the integrity of the witnesses unanswered, make repeated false claims about the conduct of the Russian investigation (both pre-Mueller and under him), and softball Barr’s own actions.

There were exceptions, mind you. Joe Neguse brilliantly got Michael Mukasey to talk about how normal it is — and was for him, when he had the job — for Attorneys General to show up for oversight hearings. Neguse then revealed that the last time an Attorney General had as systematically refused to appear for oversight hearings as Barr, it was Bill Barr, in his first tenure in the job. Val Demings got Mukasey to lay out that Barr himself has said the President was inappropriately interfering in investigations, but no one followed up on the significance of that admission. Likewise, after Demings got Mukasey to affirm a statement he made during confirmation to be Attorney General that he was never asked what his politics were, she didn’t follow up and ask whether it would have been appropriate for Mueller to ask prosecutors about their politics, or even for Republicans to ask Zelinsky about the partisan leanings of Mueller prosecutors in this hearing. No one used Jordan’s repeated questioning of Mukasey about the sheer number of unmaskings of Mike Flynn to ask Mukasey to lay out the real national security questions that might elicit such a concerted response to what was apparently one conversation, to say nothing of testing whether Mukasey actually understood what Jordan was misrepresenting to him.

Worse still, no Democrats asked Mukasey questions that would have laid out how complicit he is with some of Trump’s crimes, particularly the politicization of investigations into Turkey.

Then, long after Republicans sand-bagged anti-trust attorney whistleblower John Elias, presenting cherry-picked results of the whistleblower complaint he submitted, Mary Gay Scanlon circled back and laid out how he submitted the complaint, how it got forwarded, and laid out that Office of Professional Responsibility didn’t actually deal with the substance of his complaint, but instead said even if true, it wouldn’t affect the prerogatives of the department. Even there, neither she nor anyone laid out the significance of OPR (which reports to the Attorney General) reviewing the complaint, rather than DOJ IG, which has statutory independence. The way Elias got sandbagged should have become a focus of the hearing, but was not.

And no Democrats corrected the false claims Jordan made, particularly about the Flynn case, such as when he ignored how Bill Priestap got FBI to cue Flynn on what he had said to Sergey Kislyak or the date of notes released today that Sidney Powell had every Republican, including Mukasey, claim came one day before they had to have. No one even asked Mukasey why he was agreeing with Jordan about Obama’s pursuit of Mike Flynn when the prosecution happened under Trump (and recent documents have shown both Peter Strzok and Jim Comey working hard to protect Flynn). Mukasey would have made the perfect foil for such questions. He even could have been asked how often DOJ flip flops on its position from week to week, as Barr has in the Flynn case.

Even worse, no one circled back to get Aaron Zelinsky to correct the premise of Jordan’s questions about whether Amy Berman Jackson’s final sentence accorded with the initial sentencing memo or not, much less his cynical reading of one sentence out of context to falsely portray ABJ as agreeing with DOJ’s second memo.

Finally, Democrats did almost no fact-finding (indeed, it took Jordan to lay out the hierarchy of the politicization of the Stone sentencing). For example, while Eric Swalwell got Zelinsky to agree that the Mueller Report showed gaps in the investigations, he did not invite Zelinsky to describe what specific gaps he would be permitted to identify in the Stone investigation, such as that DOJ was not able to recover any of Stone’s texts from shortly after the election until a year later, in 2017. No one circled back to invite Zelinsky to explain that he had been able to describe Paul Manafort’s testimony implicating Trump directly in Stone’s work because descriptions of that testimony were hidden by DOJ and just got declassified — months after Stone’s sentencing. Hakeem Jeffries got Zelinsky to lay out one thing that prosecutors had been forced to leave out in the initial sentencing memo — Randy Credico’s testimony about how freaked out he was about Stone’s threats — but he left it there, without follow-up to learn if there had been anything more (like Stone’s discussions personally with Trump).

The testimony of the witnesses — especially Donald Ayer, who had to testify over Louie Gohmert’s tapping of a pencil to try to drown out his testimony — was scathing. But the Democratic members of the committee left them hanging out there, which is going to further disincent other witnesses from testifying. This hearing was far too important not to do better prep work to ensure the risks the witnesses took on will be worth it going forward.

Sometime today, Nadler said he’s reconsidering his earlier statement that the committee would not impeach Barr. But unless Democrats seriously up their game — both on preparation and on discipline — then any impeachment of Barr will be as ineffectual of the Ukraine impeachment, if not worse.