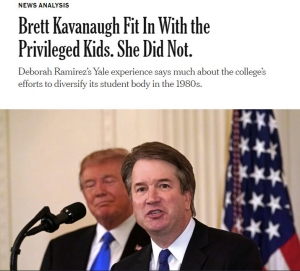 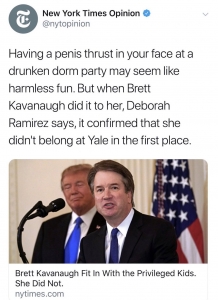 This was about the easiest thing in the world to predict. Jeff Flake issues some hollow self indulgent bullshit to make himself look like the last great reasonable man, and it is all garbage being run as cover for a complicit Trump White House and weak Senate Republicans (and at least one faux Democrat) desperately and cowardly seeking any fig leaf possible to allow them to put a craven, partisan, angry and drunkard historical sex offender on the United States Supreme Court for the next three to four decades.

If you thought that was just hyperbole previously, read this from NBC News and chew on it:

Instead of investigating Swetnick’s claims, the White House counsel’s office has given the FBI a list of witnesses they are permitted to interview, according to several people who discussed the parameters on the condition of anonymity. They characterized the White House instructions as a significant constraint on the FBI investigation and caution that such a limited scope, while not unusual in normal circumstances, may make it difficult to pursue additional leads in a case in which a Supreme Court nominee has been accused of sexual assault.

The limited scope seems to be at odds with what some members of the Senate judiciary seemed to expect when they agreed to give the FBI as much as a week to investigate allegations against Kavanaugh, a federal judge who grew up in the Washington DC area and attended an elite all-boys high school before going on to Yale.

Yes, of course Trump and McGahn are limiting the scope and time of this “investigation”. It was always going to be a sham, and that is why it was always so absurd that the SJC Minority, and other Dems, not to mention the ridiculously ever gullible national press, bought off on this idiocy. It was an own goal that they set themselves up for and are now being collared by.

This is a fraud being perpetrated on the American public. The media needs to take the time and do their own investigation, the “FBI” one is a sham being manipulated by the sex criminal led and protecting, White House.

I honestly don’t know who is more clueless in what was up with this ruse….the national media as to the forever sucker play of “the last honest Republican, Jeff Flake”….or the Democratic cheerleaders that thought this was anything other than a sham fig leaf cover play. Both are pathetic. This was obvious from the first second Flake uttered the words “limited” and “one week or less”.

PT Barnum said that a sucker is born even minute. A LOT of them were born yesterday. Didn’t have to be that way, but that is the stupidity of DC politics, and press coverage thereof.