I’ve had this squirreled away in the cupboard; I was working on it just as the government shutdown ended. But now there’s good reason to dust it off and air it out.

The issue of Deferred Action on Childhood Arrivals (DACA) and Temporary Protected Status (TPS) remains critically important even though government has been reopened and Trump received a pittance toward a wall.

The Washington Post reported on January 26 that undocumented workers were fired from their long-time jobs with Trump organization businesses.

What odd timing. Take a look at the sequence of events:

10JAN2018 — Citizenship applicant Matthew Helmsley was called a year earlier than expected by U.S. immigration for a pre-naturalization interview; he was asked after the interview if he was available on Saturday, January 19.

18JAN2019 — Media speculated about Trump’s proposal. After exchanging emails for a week with immigration personnel, citizenship candidate Helmsley received an email in that morning advising the swearing in would be at the White House the next day.

19JAN2019 — Trump’s proposal including tweaks to TPS and DACA floated some time between late Friday and early Saturday. House Democrats rejected the proposal ahead of Trump’s television speech — they insisted on funding and reopening government without conditions, and no money wall.

19JAN2019 — Just before his speech, Trump swore in Helmsley and a cohort of carefully selected naturalize immigrants, handpicked for political optics, in the Oval Office.

See that right in the middle? Undocumented personnel were fired roughly 24 hours before Trump made his special address making a counter offer.

The White House as well as the Trump organization knew more than a month before Trump’s counter proposal that undocumented workers were employed at multiple Trump business locations.

They waited until after the holidays to terminate them so as to avoid a stink.

They waited until they could use TPS and DACA as proposal items to demand wall funding, hoping the workers’ terminations would be lost in the noise about the shutdown.

And news media missed the timing.

Now here’s the other point the media missed within the last week: if Trump’s government funding proposal including limited TPS and modified DACA were offered immediately following termination of undocumented workers at Trump organization businesses — the two events coordinated and synced as if by one entity — is there any separation at all between Trump as president and Trump as head of the Trump organization?

If there isn’t, wouldn’t that make the DOJ’s so-called “narrow interpretation of a law ” this week, allowing federal officials to attempt to influence Trump by doing business with the Trump organization, really a permission slip for outright corruption via emoluments?

Meanwhile, DACA’s repeal remains up in the air, leaving roughly 800,000 residents up in the air. And TPS for Hondurans has been terminated effected November this year, forcing 86,000 to uproot from the U.S. 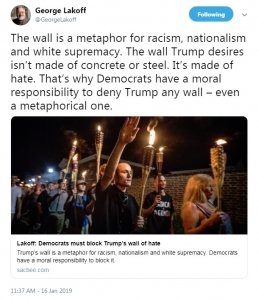