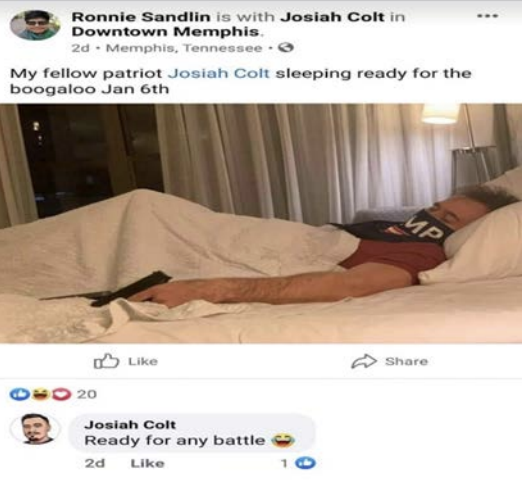 When I first wrote up my prediction that Ronnie Sandlin, Nate DeGrave, and Josiah Colt might be charged in what I called a “disorganized militia” conspiracy on April 26, I suggested that the government would likely try to use the gun that Colt brought into DC to get him to flip against the other two, who unlike Colt were also charged in key assaults allowing access to the Senate.

I bet whatever proof the government obtained that Colt brought a gun into DC and bear spray into the Capitol is being used to coerce Colt to flip in the same way it was with Jon Schaffer;

On July 13, Colt pled guilty as part of a cooperation agreement with the government signed five days earlier. His statement of offense — which was only just released yesterday — emphasizes that he brought his Glock to the January 5 rally, a violation of DC’s strict weapons laws for which he wasn’t charged.

On the evening of January 5, 2021, after arriving in the District of Columbia, Colt, Sandlin, DeGrave, and a fourth individual attended a rally protesting the 2020 Presidential Election results, which they believed to be fraudulent. Colt brought his Glock pistol to the rally.

Colt was neither the first nor will he be the last against whom the government uses DC’s strict weapons laws to entice cooperation.

Because Colt is the first known cooperator not tied to the existing Oath Keeper conspiracy (and because DOJ seems to have withheld these documents for ten days), I want to look closely at what does — and does not — show up in Colt’s SOO.

Perhaps the most striking detail in this SOO from the day of the riot involves what doesn’t appear: There’s no mention of the brawl –involving Sandlin and DeGrave, but not Colt — as they and others fought with cops to open the East doors of the Capitol. Instead, there’s just a description that they were there.

They ultimately entered the Capitol building and made their way to the Rotunda and other areas.

There are, however, new details from how the men walked from the Trump rally to the Capitol and along the way (though the SOO does not say from where) learned that Mike Pence had not backed Trump’s effort to steal the election.

17. Colt, Sandlin, and DeGrave walked together from the Ellipse to the U.S. Capitol. All three wore and carried protective gear, including a gas mask, helmets, shin guards, and motorcycle jackets. He also carried medical supplies, water, a pocket knife, and a walkie talkie. Colt did not bring to the Capitol the gun he had transported to the D.C. area; he left it in their hotel room in Takoma Park, Maryland, just outside of D.C.

18. Throughout the day of January 6, 2021, Colt, Sandlin, and DeGrave monitored the certification proceedings. While marching to the Capitol, they learned that the Vice President had not intervened to stop the certification of the Electoral College vote. 19. When the trio arrived at the Capitol, Colt repeatedly yelled, “breach the building.”

20. When Colt, Sandlin, and DeGrave arrived at the Capitol Complex, Colt repeatedly yelled, “breach the building.”

And the SOO provides different versions of Colt’s exhortations to go to the Senate Chamber once they got into the Capitol (previous filings had described that surveillance video captured Colt repeatedly talking about getting to the Senate, but quoting him saying different things then appears here). In fact, in context, this SOO suggests that Colt remained fixated on the Senate even as Sandlin and DeGrave helped to open up a second front of the attack on the Capitol.

The three breached the Capitol’s exterior barricades and entered the Complex. On the way up the stairs on the exterior of the Capitol building, Colt shouted “we’re making it to the main room. The Senate room.” As they approached an exterior entrance to the Capitol, Colt heard the sound of glass shattering and an alarm sounding. They ultimately entered the Capitol building and made their way to the Rotunda and other areas. Colt stated numerous times, “let’s get to the Senate, bro,” adding “where they’re meeting.”

The SOO describes Colt witnessing — because he was trailing the other two — Sandlin and DeGrave fighting a second set of cops to get inside the Senate.

21. Once inside the Capitol building, Colt, Sandlin, and DeGrave, along with dozens of other rioters, eventually made their way to a hallway just outside the Senate Gallery, a balcony overlooking the Senate Chamber. Approximately twenty minutes prior, U.S. Senators engaged in the proceeding to count and certify the Electoral College vote had been evacuated. Several U.S. Capitol Police (USCP) Officers, including USCP 1, tried to lock the doors to the Gallery to prevent the rioters from gaining access. Colt observed Sandlin and DeGrave try to shove their way past the officers to access the Gallery, and saw Sandlin punch USCP 1 in the back of his head. Sandlin and DeGrave eventually gained access to the Gallery, followed soon thereafter by Colt.

22. When Colt entered the Gallery, he saw that no member of Congress was inside, prompting him to yell, “it’s empty.” Colt climbed down to the Senate Chamber by hanging off the balcony and leaping onto the floor. He ran to the chair at the front of the Chamber, which is reserved for the Senate President, the Vice President of the United States.

Some of these details — particularly newly revealed comments quoting Colt — likely come from the GoPro that (per Sandlin’s bond memo) Colt was carrying until the moment he handed it to DeGrave so he could drop from the Senate balcony and sit in Pence’s chair.

Shortly thereafter, Sandlin, DeGrave, and Colt entered the now open doors and reached the upper balcony of the Senate Chamber, which members and staff of Congress and the Vice President had already evacuated. Colt handed the GoPro, which he had been carrying and using to record the riot, to DeGrave, as he prepared to jump down to the floor of the Senate Chamber.

The three got separated after this point, so it’s possible that DeGrave had the GoPro until they met up again, filming whatever it was that he and Sandlin got into later in the riot.

But we know that Colt ended up with the GoPro after they left DC, because DeGrave and Sandlin went to some lengths to try to get the video from Colt; Sandlin wanted it so he could share the video with Dinesh D’Souza and monetize it.

On January 9 and 10, DeGrave privately messaged with a third party about providing footage to produce a documentary. He told the third party to call him on wickr, and that it was “going to absolutely blow your mind what I will tell you.” DeGrave later stated that he would have to “talk my boy into it,” “go to Idaho to get [the footage],” and that it was “with his attorney.” The government understands that DeGrave was referring to footage of the insurrection within the possession of Colt, who lives in Idaho. On January 14, 2021, Sandlin discussed his “footage” with an associate, noting that he had “a meeting with Dinesh Desuza [sic] this week”11 and asking to “chat on signal.”

Given how much the men filmed from their trip to DC — showing DeGrave’s mace exploding in their van in a video taken on January 5 and showing Sandlin knowing the time of the riot and expecting violence in the video they made in TGIF the morning of January 6 — it seems likely the video shows other things, such as what they saw and whom they met at the January 5 rally the night before the insurrection.

In other words, it may show how Sandlin and DeGrave learned about the plans for the insurrection the next day, including not just that things would start at 1PM and to expect violence, but that there would be a second front from the East side, one Sandlin and DeGrave seemed focused on even as Colt emphasized the import of getting to the Senate.

Just before Colt pled guilty — as I was publicly suggesting that his plea would be a cooperation agreement — John Pierce filed his notice of appearance to represent DeGrave. So DeGrave — along with the lawyer purporting to represent 17 different January 6 defendants, many of whom have information that would be incriminating to Joe Biggs — will finally get his GoPro video.

As much as any other January 6 filing, this SOO describes how insurrectionists planned to intimidate “government personnel” who were part of the vote certification.

That’s because Colt’s testimony will be key to showing that a bunch of otherwise unaffiliated guys who (by DeGrave’s own claims) were simply responding to Donald Trump’s exhortations engaged in violence in what seems to have been a premeditated plan to attack the Capitol from multiple directions, all in an attempt to intimidate “government personnel” like the Vice President.