How Putin Got in Trump’s (and So, All of Our) Head 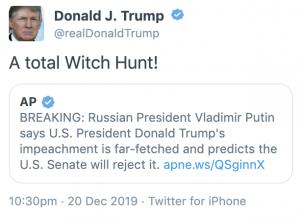 The AP story he RTed selectively reported Vladimir Putin’s taunt in response to a Dmitry Simes’ question at his yearly epic press conference (posed well into the process, even after a possibly more interesting exchange about doping and the Olympics).

In context, Putin’s response is not that inflammatory. It uses domestic US politics as a way to pressure Trump to sign START-3. (I’ve italicized the Putin language that AP took out of context and provided their own translation of; also note: Simes was himself a subject of the Mueller investigation for the early advice he gave Jared Kushner on how to manage this relationship and is close to a number of key members of Congress.)

D. Peskov : Please give a microphone.

D. Simes:  Mr. President, two days ago the US Congress passed bills on sanctions against Russia. Moreover, by such a majority that it would be very difficult for President Trump to maintain his veto.

And, as you probably know, the House of Representatives passed an impeachment act yesterday. This is the context in which he has to make decisions on foreign policy as a whole and more specifically, of course, in relation to Russia.

In this situation, what, do you think, do you and Russia have the opportunity to try to maintain or strengthen dialogue with the United States until the end of Trump’s presidency? What can you do for strategic stability, and more specifically, for the extension of the strategic offensive arms treaty START-3?

Vladimir Putin:  Regarding the extension of our dialogue until the end of Trump’s presidency, it’s as if you are already raising the question that it is ending. I’m just not sure about that. You also need to go through the Senate, where the Republicans, as far as I know, have the majority, and they are unlikely to want to remove the representative of their party from power for some, in my opinion, absolutely far-fetched reasons.

It’s just a continuation of the internal political struggle, and one party that lost the election, the Democratic Party, it is achieving results by other means, by other means, charging Trump with conspiracy with Russia, then it turns out that there was no conspiracy, this cannot lie in the basis of impeachment. Now they have come up with some kind of pressure on Ukraine. I don’t know what it is … But it’s more visible to your congressmen.

As for those decisions that are made in [respect] of Russia. They are accepted by people who practically do not bear responsibility for these decisions. These are not executive authorities, but representative ones, they must pass laws. They make such decisions regarding Russia.

Of course, this will affect the level of our interstate relations. We know the general approach, which is that the United States will work with us where it is interesting and profitable, and at the same time will restrain Russia with the help of solutions of this kind. Knowing this, we, too, will act in a mirror image, and that’s it. There is nothing good about it. These are absolutely unfriendly acts against Russia.

They want to help Ukraine maintain transit. I just told a colleague from Ukraine: we ourselves want to preserve transit, we are interested in this anyway and will do it. If you wanted to help, it would be better if they gave money. Why don’t they give money to Ukraine? Would give them the opportunity to subsidize.

Look, because they almost do not give money, they give only guarantees for possible loans, but this is not real money – there is no real support. And the IMF, at the same time as the United States, is demanding that all privileges for energy resources, including gas, be canceled. And now the population will again have a leap.

Other Westerners, the EU, are demanding that the round timber be exported and allowed to be exported to Europe. There will soon be nothing left of the Carpathians – bare rocks will be there if they take out the round timber. It seems like they support the current Ukrainian regime and leadership, but at the same time, in my opinion, they are doing some serious blows.

Now they demand that land be sold. For Ukrainians, the land has sacred significance, and I can understand it: these are the “golden” lands. Of course, the opposition immediately took advantage of this, now it begins to inflict domestic political blows on Zelensky.

They accuse us of something in relation to Ukraine, they allegedly want to help, but they really want to do something so that Ukraine replenishes its budget at the Russian expense. Give money yourself, help, give good loans at preferential rates for a long period. There is nothing.

Nevertheless, we are interested in developing and maintaining relations with the United States, and we will do this regardless of who is in the White House or who controls both houses of the US Congress.

Are there any prospects here? I think there is. You yourself mentioned one of the foundations on the basis of which we must build our relations – these are global security issues, including START-3. We have given our proposals, I have already said, and I want to repeat once again: until the end of the year we are ready to simply extend, just to take and extend the current START-3 agreement.

If tomorrow they send us by mail, or we are ready to sign and send to Washington, let the relevant leaders, including the President, put their signature there, if they are ready. But so far there is no answer to all our proposals. And if there is no START-3, then there will be nothing at all in the world that holds back the arms race. And this, in my opinion, is bad.

Along the way, though, Putin’s correct observation that Republicans will be loathe to replace their own president led AP to foreground his claimed opinion that the impeachment was like the Mueller investigation and the allegations are far-fetched.

In a world of rigorous journalism, such a report would note that the Ukraine allegations are in some ways the continuation of Trump’s efforts to undermine the Russian investigation and incorporate a hoax that Trump believes partly because Putin has convinced him to (claim to) believe.

But the AP didn’t include that. It instead included Putin’s comment with the spin he might prefer, and slapped it into a tweet that emphasized Putin’s predictive powers. And somehow that tweet attracted Trump’s attention (how it did so — after all, the AP is not Trump’s regular media diet — is one of the more interesting questions about this). And Trump tweeted it out, “A total Witch Hunt!,” like he would other tweets parroting precisely what he wants to hear.

Given Trump’s kneejerk narcissism, that he retweeted this Putin comment is not much different than him retweeting Rand Paul or Jim Jordan or Mark Meadows saying something similar. Putin is just one other person Trump has chosen to include in his echo chamber,  and he’s there for the same reason: because he says to Trump what Trump wants to hear.

Of course it is different, not just because Putin has a role in Trump’s crimes, which has made this tweet go viral in part due to outrage retweeting. A slew of stupid news coverage has followed.

But the tweet is also different because by elevating the tweet, Trump will allow Putin to claim to be correct when the Senate fails to remove Trump, not just on his analysis that Republicans won’t want to remove their own President, but also that the allegations are far-fetched, something many but not all Republicans are willing to perform belief of, but which few people who’ve read the facts actually do believe.

Along the way, Putin will co-opt those Republicans (like John Kennedy) willing to spew hoaxes about Ukraine out of partisan loyalty. Loyalty to Trump will appear to be validation of Putin, even on a question premised on the overwhelming bipartisan support for sanctions on Russia. And that, in turn, will be deemed, by Trump opponents, to demonstrate irrationality of his supporters.

It’s all very predictable and — pro Trump, anti Trump, and lazy journalist — we’re all playing our designated parts like trained monkeys. All of this reactive expression only serves to heighten partisanship on terms with real consequences for foreign policy. It doesn’t take genius by Putin to do this either (though he’s very very good at playing Trump and the western press). It just takes our own reactiveness triggered by social media.