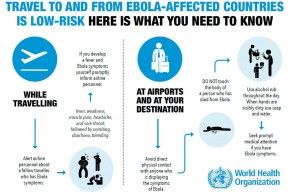 Helpful graphic from WHO illustrating precautions to prevent infection while traveling. Click on image to see a larger version.

As the Ebola outbreak in West Africa continues to grow, fresh attention was focused on it yesterday when the CDC announced that in a mathematical model they developed of the outbreak, failing to intervene in spread of the virus could lead to as many as 1.4 million people infected by late January. Somewhat lost in the response to the “wow factor” of a projection of over a million people being infected is that the model also very powerfully demonstrates how the viral outbreak can be contained simply through moderate adoption of the most basic aspects of an infection control program.

First, to review from my previous Ebola post, Ebola is only transmitted when bodily fluids of infected or dead individuals come into contact with broken skin or mucous membranes.

The key to preventing spread of the virus is for those who care for infected patients, whether they are health care workers at a hospital or family members in the home, is preventing contact with fluids from the patient. CDC has prepared an informative guidance document for how health care workers can control the spread of Ebola in their facilities. The key steps are to provide protective clothing to cleaning staff, use an effective disinfectant, avoid re-use of materials with pourous surfaces and dispose (as regulated medical waste) of all textiles, linens, pillows and mattresses that may be contaminated.

Because practices such as these are routinely implemented in US health facilities when patients with high risk infectious diseases are being treated, there is little to no chance of Ebola spreading within the US. As noted in the previous Ebola post, the extreme poverty of the health care systems in the affected countries in Africa is what has allowed the disease to spread, as health care facilities there simply cannot afford the materials they need for implementing safe practices.

Here is the output of the model for Ebola spread in Liberia and Sierra Leone if infection control is not implemented beyond the current level. As noted in the NYTimes article linked above, the current estimate is that 18% of patients in Liberia and 40% of patients in Sierra Leone are treated in facilities that prevent spread of the virus. The model predicts both the number of infected patients in the two countries and the number of beds devoted to care of those patients (“corrected” means that the estimate for number of infected individuals is corrected for the assumption that 2.5 times more patients are infected than have been officially reported):

As noted above and widely cited in the press yesterday, if the virus outbreak is left unchecked, the model predicts a cumulative total 1.4 million infected patients in the two countries by January 20 (many of whom are dead by then) and a need for up to 100,000 beds for treatment of these patients.

The good news that is buried in the CDC model is that stopping the virus outbreak does not require implementation of virus control measures for treatment of every infected patient. In the graphs below, we see the output from the model under the assumption that viral control practices start to be implemented now and expand to a level of 70% of infected patients (25% of them in hospitals and 45% in home treatment) being treated under safe practices by December: 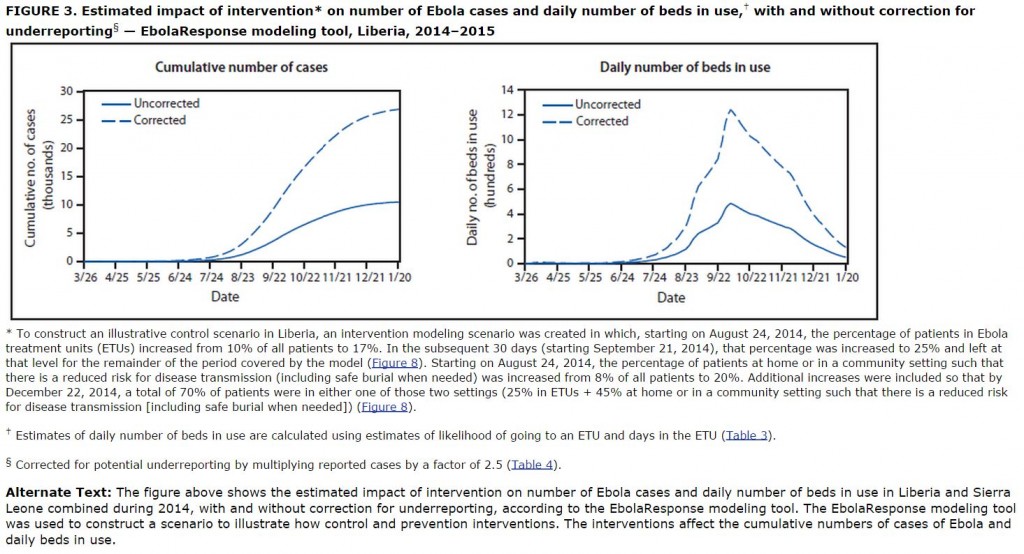 Note that the cumulative number of cases levels off between 25,000 and 30,000 and the total number of beds needed peaks at around   1300 before dropping rapidly.

This model demonstrates very clearly that the highest priority for stopping the Ebola outbreak should be rapid and widespread implementation of basic infection control practices. Spreading this information into homes where patients are being treated is key. Convincing families of the importance of removing infected clothing and bedding seems likely to be the pivotal aspect of the public information campaign. Help from the West will be essential in providing the huge amount of disposable protective clothing and the necessary cleaning and disinfecting supplies. Replacement clothing, linens, mattresses and pillows should be provided as many of the affected families will be hard-pressed to replace these items under the already difficult conditions of an infected family member.

Further good news is that these projections were based on conditions in August and there is reason to believe that the situation may already be getting better. From the Times, again:

The caseload projections are based on data from August, but Dr. Thomas R. Frieden, the C.D.C. director, said the situation appeared to have improved since then because more aid had begun to reach the region.

“My gut feeling is, the actions we’re taking now are going to make that worst-case scenario not come to pass,” Dr. Frieden said in a telephone interview. “But it’s important to understand that it could happen.” 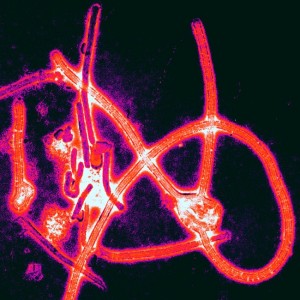 With the death toll now over 700 in an Ebola outbreak that has been building since February, Americans are suddenly up in arms about the virus, but only because it was announced yesterday that up to two Americans infected with the virus may be transported to Atlanta for treatment. Yes, the virus is especially deadly, with a death rate of 70-90% of infected patients, but the virus does not spread particularly efficiently and is not airborne. Writing at CNN.com, biologist Laurie Garrett points out a disaster scenario for the virus. Rather than an outbreak in the US, which seems extremely unlikely, Garrett outlines how the virus could spread in the much more densely populated Nigeria rather than the more remote areas of Guinea, Sierra Leone and Liberia where it is now concentrated.

Before getting into the details of the current outbreak and its possible spread to Nigeria, a little background on the virus. From the World Health Organization, we have this information on how the virus spreads:

Ebola is introduced into the human population through close contact with the blood, secretions, organs or other bodily fluids of infected animals. In Africa, infection has been documented through the handling of infected chimpanzees, gorillas, fruit bats, monkeys, forest antelope and porcupines found ill or dead or in the rainforest.

Ebola then spreads in the community through human-to-human transmission, with infection resulting from direct contact (through broken skin or mucous membranes) with the blood, secretions, organs or other bodily fluids of infected people, and indirect contact with environments contaminated with such fluids. Burial ceremonies in which mourners have direct contact with the body of the deceased person can also play a role in the transmission of Ebola. Men who have recovered from the disease can still transmit the virus through their semen for up to 7 weeks after recovery from illness.

Of particular relevance to the two patients who may be transported to Atlanta for treatment (they work for Samaritan’s Purse, an aid organization) and the tragic death of Sheik Umar Khan, Sierra Leone’s top Ebola doctor, the information from WHO continues:

Health-care workers have frequently been infected while treating patients with suspected or confirmed EVD. This has occurred through close contact with patients when infection control precautions are not strictly practiced.

The fact that these health care givers become infected because standard infection control precautions are not strictly practiced in no way should suggest that they are uninformed or careless. Instead, Garrett points out in her article the stark realities facing health care providers in the three countries where the outbreak rages:

To show how ill-equipped these nations are to battle disease, per capita spending on health care, combining personal and governmental, amounts to only $171 a year in Sierra Leone, $88 a year in Liberia and $67 a year in Guinea, according to the Kaiser Foundation.

For those who want more detail on the virus, this succinct summary of the structure of the Filovirus family of viruses and their mode of operation is very informative.

For the panic-motivated hypochondriacs among us, initial symptoms of this virus mimic the onset of most other viral infections.

The most recent update from WHO on the outbreak can be read here. The update summarizes the assistance that is being provided to the countries where the outbreak is ongoing. Significantly, WHO is not advocating travel restrictions at this time.

Returning to Garrett’s article, she points out the factors that would lead to chaos should Ebola spread in Nigeria:

Were Ebola to take hold in that country [Nigeria], spreading from person-to-person in a densely populated, chaotic city such as Lagos, the worldwide response would swiftly spin into uncharted political and global health territory.

Consider the following: Nigerian physicians are on strike nationwide; hundreds of girls have been kidnapped from their schools and villages over the past six months by Boko Haram Islamist militants — and none has been successfully freed from their captors by the Abuja government.

Nigeria is in the midst of national election campaigning. President Goodluck Jonathan’s government is, at best, weak. The nation is torn apart by religious tension, pitting the Muslim north against the Christian south. Islamists in the north have long distrusted Western medicine. They have opposed polio vaccination and have kidnapped and assaulted central government health providers.

Garrett’s plea is for an already-planned African summit on Monday to be used to develop a coordinated plan for dealing with the virus:

One way or another, Obama must take advantage of Monday’s Africa summit to press the case for calm and appropriate responses. These would include specific post-Ebola financial commitments to Liberia, Sierra Leone and Guinea.

The possibility that the epidemic might take hold in Nigeria must be confronted, and plans of action must be considered. The world cannot afford to make decisions in the heat of panic about such things as international airport closures, withdrawal of foreign oil workers, negotiations for outbreak responses with northern imams, hospital and clinic infection control training across thousands of Nigerian health facilities, deployment of international assistance teams for rapid diagnostics and lab assistance and countless other contingencies.

Sadly, Garrett points out important information on the damage that has already been done in this outbreak:

When this Ebola epidemic eventually ends, the health budgets of these nations [Liberia, Sierra Leone and Guinea] will have been bankrupted, and many of their most skilled and courageous physicians, nurses, Red Cross volunteers and hospital workers will have perished.

Let’s hope that Monday sees the beginning of stronger coordination to put more resources where they are needed to halt the spread of this ongoing disaster.