The First Node of the Insurrection Conspiracy: The Oath Keepers

With a fairly steady drumbeat since the day of the attempted coup pm January 6, the government has been charging one after another person involved, most based off evidence obtained via social media and tips from those who know them. But that has left the picture surrounding the event rather formless, probably (given that almost all the affidavits were written by different FBI Agents) intentionally so.

That began to change in the last two days with charges against Jessica Watkins, retired Marine Donovan Ray Crowl, and Edward Caldwell, with the former two members of an Ohio militia and Caldwell coordinating their efforts as part of a larger Oath Keepers effort.

These Affidavits describes that Watkins and Crowl were in the disciplined unit that entered the Capitol in formation.

I have reviewed footage of the January 6, 2021, incursion of the U.S. Capitol, including a video that, at the approximate 3 minute and 8 second mark, shows 8 to 10 individuals in paramilitary equipment aggressively approaching an entrance to the Capitol building.1 These individuals, who are wearing helmets, reinforced vests, and clothing with Oath Keepers paraphernalia, move in an organized and practiced fashion and force their way to the front of the crowd gathered around a door to the U.S. Capitol.

It relies for that claim on Parler postings from Watkins describing using force to get into the Capitol and entering the Senate, not to mention IDing her compatriots. 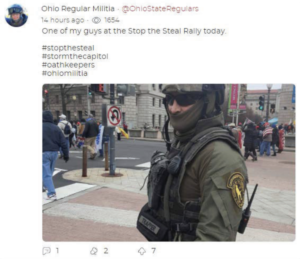 Crowl also did an interview with Ronan Farrow.

The Caldwell affidavit describes that, after returning home to Ohio after the initial riot, Watkins then went back to the DC area to stay with Caldwell.

During the course of this investigation, law-enforcement authorities spoke with Witness-1 (W-1). W-1 informed that although WATKINS returned to Ohio after the January 6, 2021 incursion, she subsequently left Ohio on or about January 14, 2021, to stay with a friend and fellow Oath Keeper whom W-1 knew as “Tom” or “Commander Tom.” As described below, your affiant believes this individual is CALDWELL. WATKINS also provided W-1 with instructions on how to contact her, including by providing a phone number at the location where she would be staying, 540-XXX-XXXX. A database check for this phone number reveals that it is a phone on CALDWELL’s property, the PREMISES. [number substituted]

The Caldwell affidavit then describes him, before the January 6 insurgency, recommending they pile into one or two rooms at the Comfort Inn in Ballston. It describes Crowl messaging Caldwell that he’d be seeing him soon and calling him Commander.

It also cites Caldwell’s own social media posts from the riot, including his report of what the Proud Boys had done to push the cops out of the way.

Caldwell also sent a Facebook message (this may be private, which, since there’s no mention of a warrant, would suggest another witness shared it with the FBI) saying,

We need to do this at the local level. Lets storm the capitol in Ohio. Tell me when!

Watkins and Crowl were charged with the two trespassing-based charges virtually everyone gets charged with, along with 18 USC 1512(c)(2), tampering with a proceeding, which carries a 20 year sentence.

Caldwell is charged with the two trespassing charges, the tampering one, along with conspiracy to tamper, and abetting.

Presumably, the FBI has been obtaining search warrants to identify the other people involved in this node of activity, including the common communication between (for example) Caldwell and the Proud Boys, as well as the Ohio Militia and the Oath Keepers more generally. Likewise, the FBI is likely using location data from within the Capitol to understand precisely what these people were doing.

This is not the first use of a conspiracy charge (the zip tie guy and his mom were charged with conspiracy, too, but that was probably because there was less direct social media evidence of her inside the Capitol and also as a means to get her son to cooperate), but it is one that is likely to be fleshed out as a way to force people to confess what the larger plan, if any, was.

Update: Corrected how zip tie guy and mom were charged.

Update: DOJ has released a more detailed conspiracy charge against these dirtbags. This Facebook message is one of the most chilling: