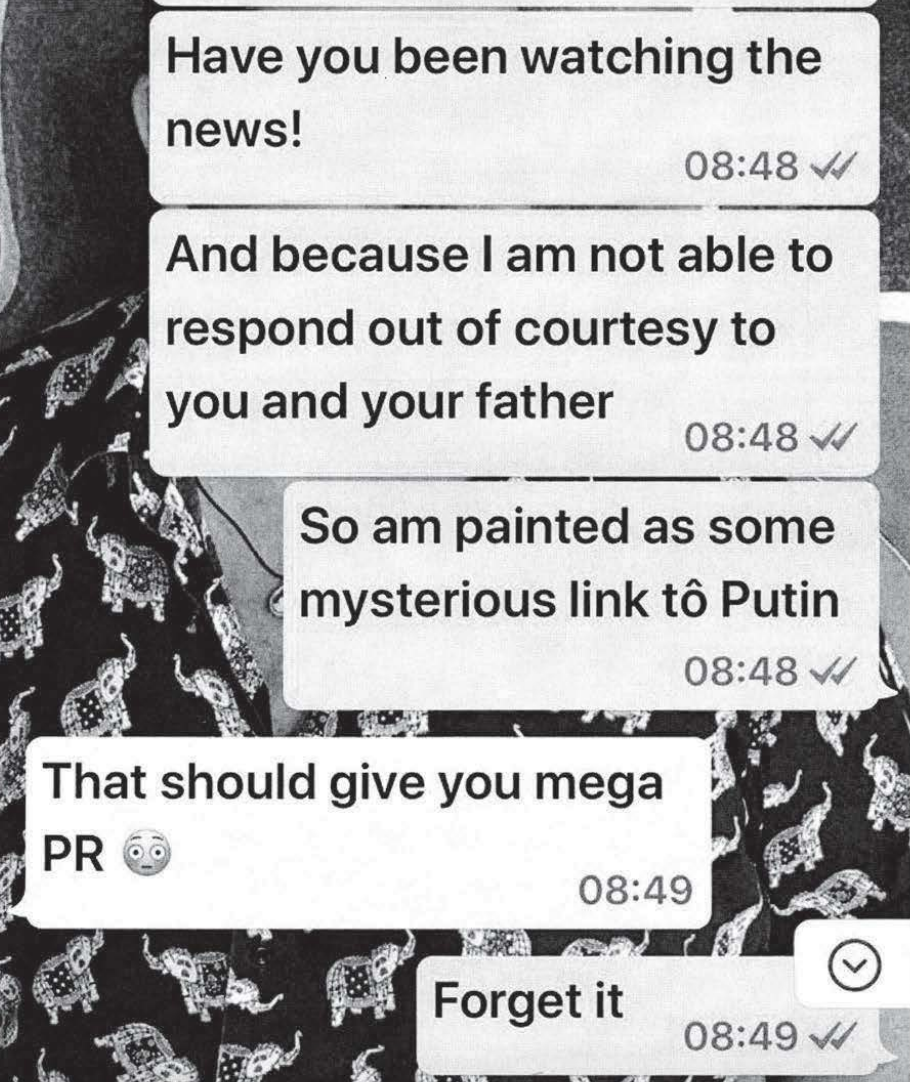 Neither of the Agalarov employees — Ike Kaveladze and Rob Goldstone — involved in the June 9 meeting were fully responsive to the Senate Judiciary Committee. Kaveladze, who worked with Aras Agalarov to implement the meeting, at first failed to tell SJC that he got on a plane the day after the meeting and flew to Moscow. Even in a second appearance, he had not looked up whose Russian mobile phones he spoke to the day after the meeting, while he was still in NY, and never explained the timing of his last minute trip to NY and then Moscow.

Goldstone had to do a second appearance to talk through efforts to set up a meeting with Putin in 2013, and also to walk through newly complete versions of the WhatsApp texts he had with Emin as the June 9 story broke last summer. And Goldstone — an independent businessman who surely needs such records for tax purposes — ultimately never provided phone records that would show whom he called when during key periods.

I’d like to look at the circumstances surrounding a piece of evidence newly turned over and discussed in Goldstone’s second interview, which took place on March 29. At issue is a WhatsApp voice message Emin left Goldstone at 9:17 AM on July 10, 2017, in the midst of Goldstone’s panic as he increasingly became the focus of press attention and even (he claims) started to lose business over having set up the June 9 meeting. It takes place shortly after this exchange, in which Goldstone complains about being depicted as “some mysterious link to Putin,” to which Emin (a good Russian) responds, “That should give you mega PR.” (PDF 21) 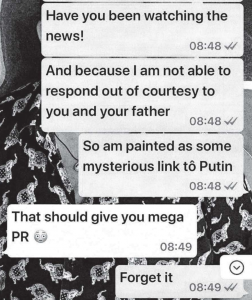 According to Goldstone’s testimony, after he texted, “Forget it,” he and Emin spoke by phone, and the latter told Goldstone he should be happy because the scandal was making him one of the most famous people in the world.

I think there was a call between us as some point before these [voice mails]. After I said, “Forget it,” I believe we did have a really brief call that I hung up on. And, yes, there was. It was, again, him saying, “I still don’t understand. This is mega” — you know I think at one point he said to me, “This is making you one of the most famous people in the world,” and the reason I remember it is because I said to him, “You know, Jeffrey Dahmer was famous. I don’t think he got a lot of work out of it,” and hung up.

What follows are three WhatsApp voicemails left from 9:17-18 on July 10 (while this is taking place, Emin is in Moscow and Goldstone is in Greece; as this exchange was taking place, Kaveladze was landing in Moscow, having had a call with Don Jr’s lawyers on July 7, the day Putin and Trump talked about adoptions as the Trump camp was struggling to come up with a statement about the June 9 meeting).

In the first call, Emin tried to downplay his own role in things, suggesting Goldstone should work with Kaveladze and his father.

Rob, I understand your frustration and no way I’m trying to downsize what’s happening. But as you know, as the meeting happened through Ike and my Dad, I was not involved, and I was also against all possibilities. The same way right now, any comments should go through them. Just figure out with Ike what the strategy should be. I don’t mind you commenting anything. There’s no problem from my side, as you understand.

Goldstone didn’t provide a very convincing explanation for what Emin meant by “I was also against all possibilities.”

Then Emin calls back again (it’s pretty obvious Goldstone is still angry and ignoring these three calls). He offers to ask his father whether Goldstone should comment.

And if you want, I can speak to my father and ask him directly if he minds or doesn’t mind, wants you to comment, doesn’t want you to comment.

Which brings us to the third voicemail, which WhatsApp shows to be 1:10 long, but which Goldstone’s lawyer, Bernard Ozarowski, says was only 12 seconds long. In addition to that discrepancy (which Ozarowski claims is a WhatsApp error), the first word of even the 12 second voicemail — describing someone contacting Aras — is cut off. (PDF 59-61)

MR. PRIVOR: Before the break, we were discussing one of the voicemail messages that appears to be cut off, and, Counsel, you were going to explain sort of what you had in your files and what has been produced, and we’d invite you to make a statement on the record about that.

MR. OZAROWSKI: Sure. Our best understanding at this point is that all of the audio files that we’ve produced to the Committee are complete. I myself helped get the files off of Rob’s phone, and they are complete files to the best of our knowledge. Our general understanding is that the 1 minute and 10 second time stamp is an error on WhatsApp. It appears maybe to be related to the minute and 10 second voicemail that comes later in the string of texts. This message, as best we can tell, is approximately 12 seconds. And, also, when looking at Rob’s phone more recently and replaying it, the message appears to be 12 seconds long.

MR. PRIVOR: Very well. We appreciate that clarification, and let’s now continue with that particular message.

BY MR. PRIVOR: Q. So as noted — and we understand that the file you have is shorter — it nevertheless appears to be cut off slightly at the beginning. It sounds like Emin is saying someone was in direct contact with him. The “him” I think is a reference to Aras Agalarov. Is that your understanding, Mr. Goldstone?

A. Could I ask that that be played again? Just because there’ s been a little time in between.

MR. AGALAROV: — is in direct contact with him, but I haven’t spoken on the matter recently to him, but I can. Let me know if you want me to.

MR. GOLDSTONE : I can’t make out what that first word is, but it obviously relates to somebody being in direct contact with him. And as it relates to the previous voice message, I would agree that it’s with his father, Aras.

BY MR. PRIVOR :  Q. Do you recall having any conversation with Emin about who was in direct contact with his father?

Q. Emin says in that message that he hasn’t “spoken on the matter recently to him, but I can.  Let me know if you want me to.” That, again, sounds like an offer to speak to his father. The “him” is a reference to Aras. Do you agree with that?

A. I agree with that.

Q. And did you yourself directly follow up with Aras?

Except that’s highly unlikely because earlier in this same exchange, Emin and Goldstone had discussed that Kaveladze was in the air on the way to Moscow. 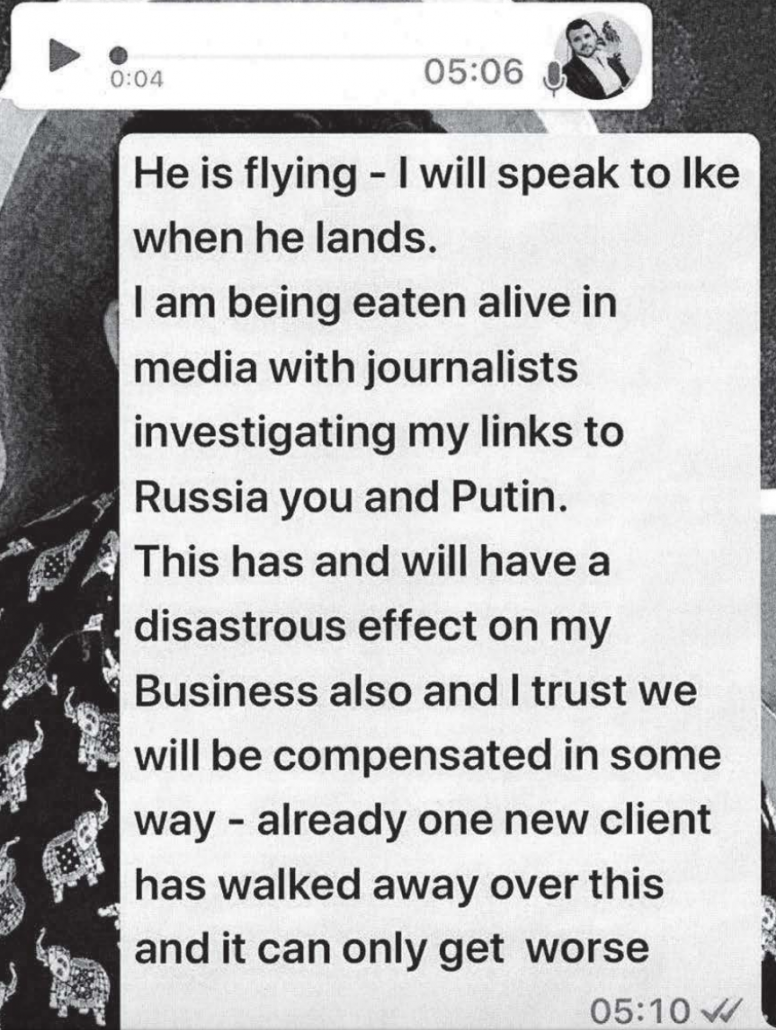 And after Kaveladze lands (I’m still trying to figure out the real time of this text, but it temporally slides into the discussion of statements Goldstone and Emin started, as the larger string of Kaveladze’s texts show), Kaveladze texts Emin and asks to talk. (PDF 31)

The next exchange of texts seems to suggest Emin and Kaveladze meet to talk about a statement. First Goldstone says that Kaveladze has told him he — either Emin alone or with Kaveladze — is drafting a statement. 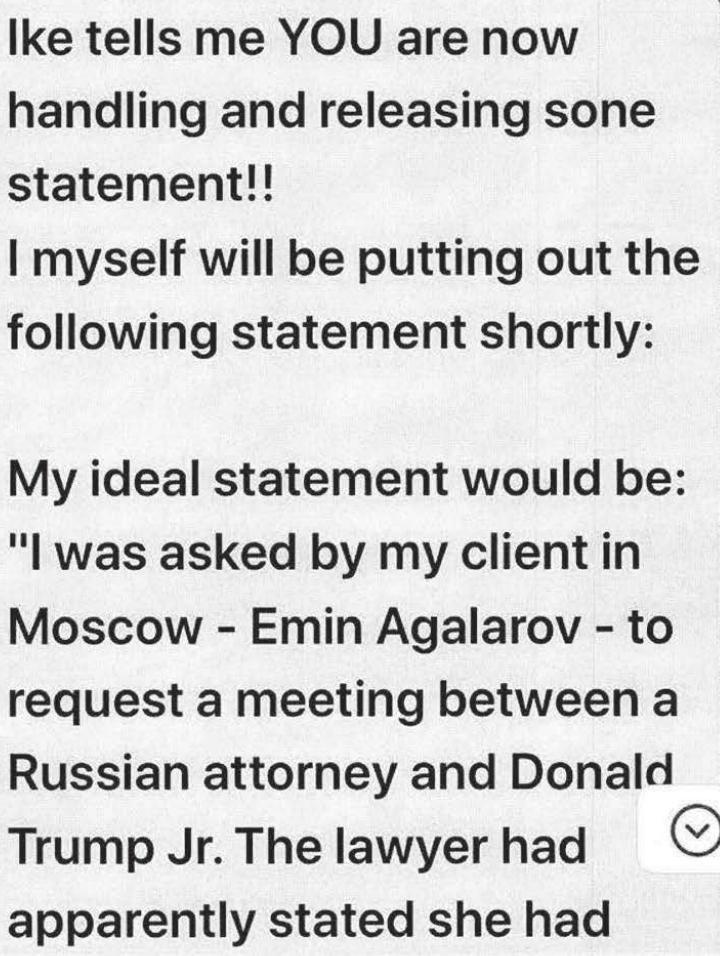 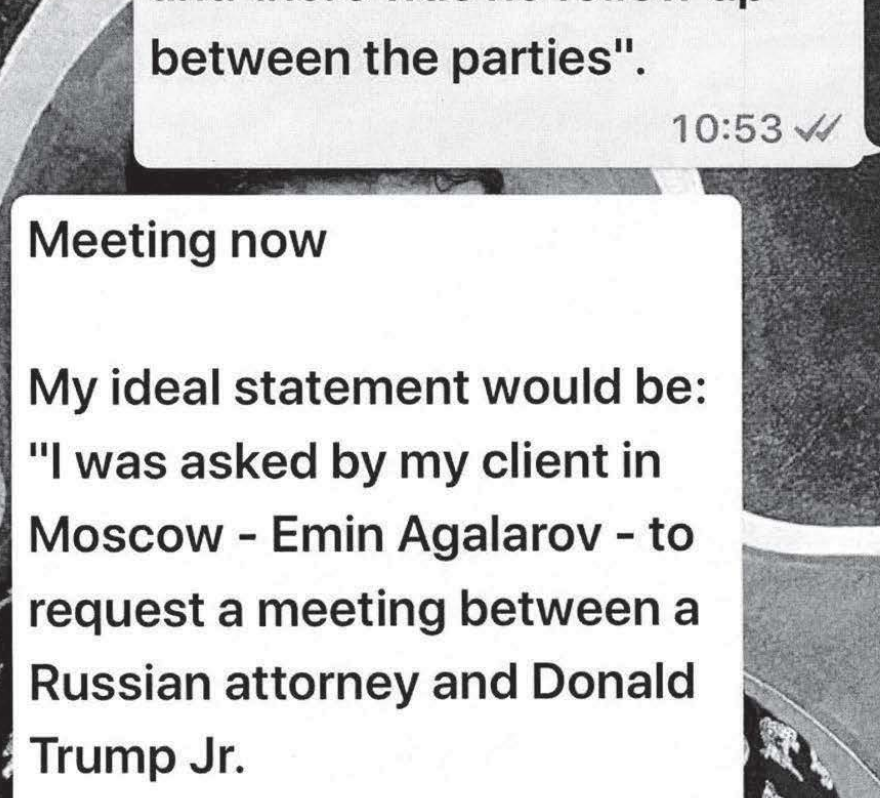 So the missing name doesn’t appear to be Kaveladze.

The only other person in the loop on these issues — Emin’s assistant Roman Beniaminov — worked through Emin and Kaveladze, just like Goldstone did.

There are, presumably, other possibilities we wouldn’t know about. For example, Emin could be suggesting that the Agalarovs throw business to Goldstone via some other means.

But the context suggests one possibility. The last thing Goldstone texted before the phone call he hung up on and Emin’s three voice mails was a complaint that he was being perceived as having a link to Putin, with earlier complaints about losing work from it. By Goldstone’s own description, on the call he complained again about losing work, and analogized what he had just raised — a purported link to Putin — with being a serial killer.

In the third of three voicemails that Emin leaves to try to placate Goldstone for suggesting he should be thrilled about a link to Putin rather than horrified by it, Emin starts by saying someone — the missing name — “is in direct contact with” his father, Aras Agalarov. “I haven’t spoken on the matter recently to him,” — Emin doesn’t say what matter, which might either relate to the June 9 meeting or something discussed on the phone call. But he offers to speak to (apparently) his father about this. “but I can. Let me know if you want me to.”

Again, that’s in no way definitive. But in context, it’s possible. It certainly might explain why these texts weren’t fully turned over in the first round, why at least the first word of the voicemail, if not 58 seconds, is missing, and why Goldstone hasn’t, apparently, turned over his phone records (which would show how long this call was).

At the very least, Mueller has Goldstone’s phone records. He may well have a copy of the WhatsApp chats from Facebook. He also surely has the other information Kaveladze didn’t turn over to SJC. So he may well know the answer to this.