The FBI had a press conference today to ask for help filling in the last 18 minutes of the 4-hour gap between the time  San Bernardino killer Syed Rizwan Farook and his wife, Tashfeen Malik, shot up his holiday party and the time cops killed them in a shootout.

In the absence of any other evidence the couple worked with a more organized group, the FBI wants to make sure the couple didn’t do anything in that 18-minute window that would indicate some kind of cooperation.

[A]mid signs that the investigation is slowing down, they issued a public appeal for help from anyone who might have information on what the couple, Syed Rizwan Farook and Tashfeen Malik, did from 12:59 p.m. to 1:17 p.m. on Dec. 2, perhaps in the form of a witness sighting or an image by a stray surveillance camera.

Officials said Mr. Farook left his home at 8:37 a.m. and arrived at the Inland Regional Center, where co-workers were attending a morning training session and a holiday party, at 8:47 a.m. They said he left at 10:37 a.m., leaving behind a knapsack filled with pipe bombs that were never detonated. He returned at 10:56 with Ms. Malik and opened fire, leaving 14 people dead and 22 injured.

From there, the couple went to Seccombe Lake, which is a short drive from the Inland Regional Center. F.B.I. divers searched the lake last month and found no items related to the investigation.

[snip]
Mr. Bowdich said the couple spent most of the four hours after the attack driving.

“A lot of zigzagging around, going back and forth on the highway, going up and down,” he said. “There is no rhyme or reason to it that we can find yet. Maybe that 18-minute gap closes that gap, maybe it doesn’t.”

Frankly, I’m more interested in why the FBI doesn’t have cell phone tracking data from this period, especially given that they clearly have it from after the 18 minute gap. I asked on Twitter today but none of the journalists who covered this presser seem to have asked that obvious question (though there seems to be a map indicating some kind of cell tracking).

If they shut off their phones or otherwise hid their tracks, it would suggest some importance to whatever they were doing in that 18 minute gap.

One thing the FBI didn’t say, nor any of the crack reports I saw covering the press conference, is that the 18 minute gap — from 12:59 p.m. to 1:17 — happens to coincide with a period when Farook’s now arrested buddy, Enrique Marquez, was not captured on his employers’ closed circuit video. 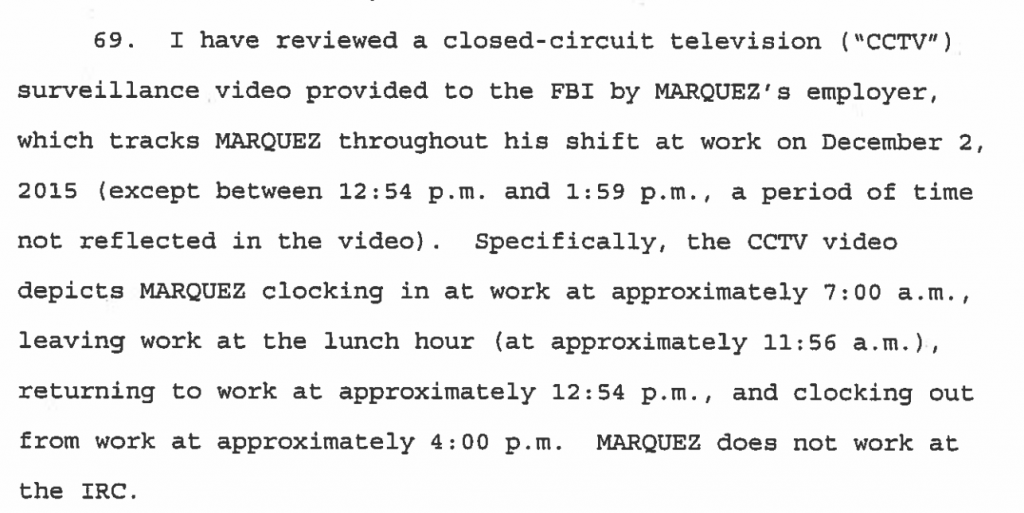 Frankly, that’s not the most interesting possibility for the couple’s actions in that window (and I don’t know whether Marquez’ employer was in the geographical window where the couple may have been).

But as I noted, Marquez’ claims to have dissociated from Farook after they planned a terrorist attack in 2012 don’t accord with the fact that he fake-married Farook’s brother’s sister-in-law.