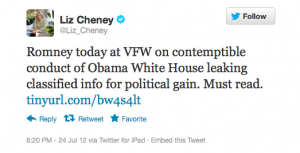 And did he do it to protect Dick?

I admit. I can’t help myself. By some strange force, I found myself back at Prettyman this week, wading through the million-dollar CIPA battle that Libby waged in his graymail attempts (for the record, Fitz must say "graymail" about 20 times by the second day of these hearings). And in a December 29, 2005 defense filing (I haven’t scanned it yet, either because I was liveblogging all day or I’m just trying to torture Jeff) asking for further information to be declassified in response to the Jencks information they got, I found this footnote clarifying the sentence, "According to [Libby’s CIA briefer, Craig] Schmall, ‘Since I had no knowledge of the ambassador or his wife, I presume Libby gave me [the names Joe Wilson and Valerie Wilson].’"

Eric Edelman, whom the government recently decided not to call as a witness, contradicts Mr. Schmall on this point. According to Mr. Edelman, sometime before June 6, 2003 (when Mr. Edelman left the OVP), Mr. Schmall "identified the former envoy as Joseph Wilson" and "advised Edelman that the CIA’s Counterproliferation Division sent Wilson to Niger to conduct the inquiry, not the OVP." 6/23/04 Edelman FBI 302 at 2. According to Mr. Edelman, Mr. Schmall showed him internal CIA emails about the Wilson trip. 8/6/04 Edelman Grand Jury T. at 16. In addition, Mr. Schmall may have told Mr. Edelman during this period that Ambassador Wilson’s mission to Africa was suggested by his wife. 6/23/04 Edelman FBI 302 at 2; see also 7/7/04 Edelman FBI 302 at 2-3 (same); 8/6/04 Edelman Grand Jury T at 15-19 (same). Apart from the fact that Mr. Edelman contradicts Schmall on a significant point, the government may have elected not to call him because he makes clear in his grand jury testimony that he does not recall any mention of Ms. Wilson in his discussion with Mr. Libby following the June 19 New Republic article (see Indictment at 5-6 12-13) , and he never discussed with Mr. Libby the nature of the "complications" to which Mr. Libby referred. 8/6/04 Edelman Grand Jury T. at 29-30.

Now, as to the substance of Edelman’s denial that he was talking about Plame when he advocated leaking "information" to rebut Joe Wilson, here’s what the indictment said. It clearly relies on a witness or some other evidence that is not named Scooter Libby.

Shortly after publication of the article in The New Republic, LIBBY spoke by telephone with his then Principal Deputy and discussed the article. That official asked LIBBY whether information about Wilson’s trip could be shared with the press to rebut the allegations that the Vice President had sent Wilson. LIBBY responded that there would be complications at the CIA in disclosing that information publicly, and that he could not discuss the matter on a non-secure telephone line.

And in his grand jury testimony, Edelman told a story that did not directly contradict the substance of testimony apparently given about that conversation, but conveniently denies everything for which there was no apparent witness (that is, if you thought Edelman were trustworthy, you might just think Edelman dropped the issue after the witness stopped following it).

That’s interesting. But I’m much more interested in this part of the footnote.

According to Mr. Edelman, Mr. Schmall showed him internal CIA emails about the Wilson trip. END_OF_DOCUMENT_TOKEN_TO_BE_REPLACED