As I laid out here, Judge Amit Mehta rejected Trump’s motion to dismiss three lawsuits against him last week. Click through for my explanation of why it matters that Judge Mehta — among the most respected of DC judges — issued this decision.

But there’s another reason why it matters that Mehta issued this ruling.

I was, frankly, unsurprised that Mehta ruled for plaintiffs on their claims that Trump entered into a conspiracy with two militias to attempt to prevent the vote certification. I’ve been laying out all the evidence Trump could be included in a conspiracy with the militias to obstruct the vote count for some time. And on a motion to dismiss, the judge must  assume all the alleged facts were true and only tests those claims for plausibility. Mehta didn’t rule that Trump did so; he ruled that plaintiffs will have a chance to make that case.

I was far more surprised that Judge Mehta also ruled it plausible that Trump aided and abetted the actual and threatened physical assaults committed by the rioters. Here’s how Eric Swalwell’s suit argued that Trump abetted the threatened attacks on Members of Congress, including Speaker Pelosi:

241. The mob also unlawfully and intentionally entered non-public areas of the Capitol building, including the members’ private offices. Members of the mob damaged and vandalized personal and public property and stole documents, electronics, and other items from some members’ offices.

242. As the mob made its way through the Capitol looking for Members, participants threatened to kill numerous individuals, including, but not limited to, Vice President Mike Pence and Speaker of the House Nancy Pelosi. The mob terrorized and injured scores of people inside and outside of the Capitol, including the Plaintiff.

248. Before directing the mob to the Capitol, the Defendants instructed them to “fight like hell,” “start taking down names and kicking ass,” and that it was time for “trial by combat.”

249. The Defendants intended these words to be taken literally.

250. For several hours after the mob had stormed the Capitol, the Defendants refused to communicate anything to the mob that might discourage continued unlawful action.

251. The Defendants knowingly and substantially assisted in the assault that was perpetrated upon the Plaintiff. The Defendants riled up the crowd and directed and encouraged the mob to attack the Capitol and seek out members of Congress and assault them.

Here’s how Capitol Police officer Sidney Hemby, described being assaulted while trying to protect the East doors of the Capitol in his lawsuit with James Blassingame.

63. Officer Hemby ran to the East Front stairs to try to stop the crowd, but it was too late, and the crowd was too large and aggressive.

64. The crowd chased him and his fellow officers to the top of the stairs and forced them against the doors.

65. At 1:49 p.m. 1 , after Trump had returned to the White House, and was reportedly watching on TV as events were unfolding at the Capitol, he tweeted out the entirety of his speech: 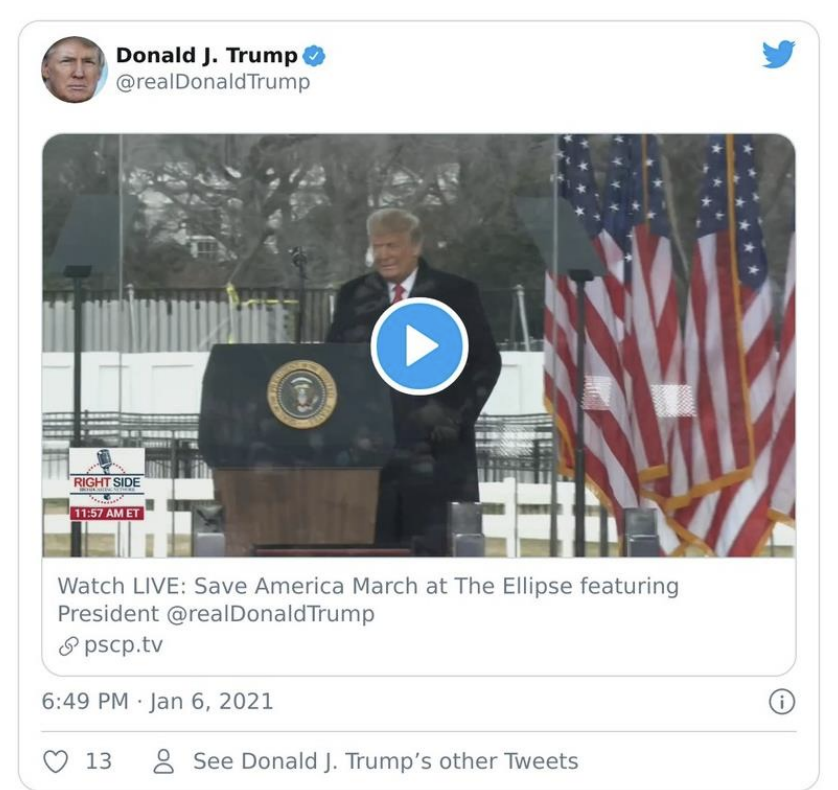 68. But the insurrectionists continued to scream, “Fight for Trump,” “Stop the Steal,” and various other slogans, as they struck him with their fists and whatever they had in their hands. Things were being thrown at him, and he was sprayed with chemicals that irritated his eyes, skin, and throat.

Next, the court takes up Plaintiffs’ common law assault claims based on an aiding-andabetting theory of liability. Swalwell Compl. ¶¶ 237–252; Blassingame Compl. ¶¶ 163–168. President Trump’s motion in Swalwell does not separately address the aiding-and-abetting-assault claim, but he extensively addresses it in his Blassingame motion. See generally Swalwell Trump Mot.; Blassingame Trump Mot. at 33–40. The court will exercise its discretion and consider those arguments in both cases.39

Halberstam v. Welch remains the high-water mark of the D.C. Circuit’s explanation of aiding-and-abetting liability. The court there articulated two particular principles pertinent to this case. It observed that “the fact of encouragement was enough to create joint liability” under an aiding-and-abetting theory, but “[m]ere presence . . . would not be sufficient.” 705 F.2d at 481. It also said that “[s]uggestive words may also be enough to create joint liability when they plant the seeds of action and are spoken by a person in an apparent position of authority.” Id. at 481–82. A “position of authority” gives a “suggestion extra weight.” Id. at 482.

Applying those principles here, Plaintiffs have plausibly pleaded a common law claim of assault based on an aiding-and-abetting theory of liability. A focus just on the January 6 Rally Speech—without discounting Plaintiffs’ other allegations—gets Plaintiffs there at this stage. President Trump’s January 6 Speech is alleged to have included “suggestive words” that “plant[ed] the seeds of action” and were “spoken by a person in an apparent position of authority.” He was not “merely present.” Additionally, Plaintiffs have plausibly established that had the President not urged rally-goers to march to the Capitol, an assault on the Capitol building would not have occurred, at least not on the scale that it did. That is enough to make out a theory of aiding-and-abetting liability at the pleadings stage.

39 President Trump contends for the first time in his Swalwell reply brief that aiding and abetting a tort is not a recognized cause of action under District of Columbia law. Swalwell Trump Reply at 25–26. That argument comes too late, and the court declines to consider it.

Again, this is just the first step. It will be appealed. This is not a final ruling. But Mehta’s decision means that both sets of plaintiffs may get a chance to hold Trump accountable for the violence attempted or committed by people who responded to the President’s command to, “fight like hell.”

This part of Mehta’s ruling is far more important than the conspiracy side. To understand why, consider some of the cases over which Judge Mehta is presiding, which would be what he might have in mind when he thinks of what it means that Trump may have abetted assaults.

Landon Copeland is an Iraq War veteran with PTSD that has contributed to some epic meltdowns in court hearings. He traveled to DC on January 6 from the Four Corners region of Utah, taking a full week off work. He said he made the trip, he told the FBI, because President Trump ordered him to be there.

The defendant said that he traveled to the Capitol in part because former President Trump ordered him and others to be there.

Copeland went to Trump’s rally, then went with the crowd to the Capitol. He’s a really big guy and is accused of several assaults at the first barricades.

At the front of this crowd, the defendant shouted at the officers; he was visibly angry. Shortly thereafter, another rioter approached a police officer, began shouting at the officer, and put his hands on or around the officer’s neck. Copeland pushed that other rioter, from behind, into the officer, causing that officer to fall to the ground. After this, other officers stepped forward in an apparent attempt to protect the fallen officer. Copeland grappled with and pushed them, grabbing onto one officer’s riot shield, another officer’s jacket, and then pushing against the riot shields of two other officers. 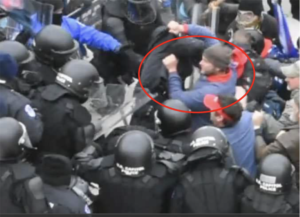 Thomas Webster is a former Marine and retired NYPD cop who traveled to DC from New York with a revolver, a bullet-proof vest, and some MREs. While he claims he left the revolver in his hotel room, he wore his bullet proof vest to the rally at the Ellipse, then walked to the Capitol, carrying a Marine flag. After verbally attacking one of the cops at a barricade, he pushed over it, wrestled the cop to the ground, and grabbed his helmet, seemingly (though not in fact) gouging the cop’s eyes.

Shane Woods drove to DC from Illinois on January 5. Like the others, Woods went to the Trump rally and then walked with the crowd to the Capitol.  In some of the early fighting at the west side of the Capitol he is accused of tripping a female cop. 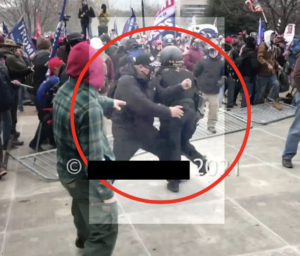 Then, a few hours later, Woods was involved in a group attack on some media, allegedly tackling a cameraman in similar fashion to the attack on the cop. 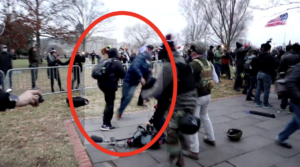 Peter Schwartz is a violent felon who traveled to DC while out on release from prison because of COVID. Schwartz is accused (along with a woman I believe to be his partner) of involvement in a range of assaults on cops protecting the Lower West Terrace and the Tunnel on January 6, including stealing mace from and then using it on cops and throwing a chair. 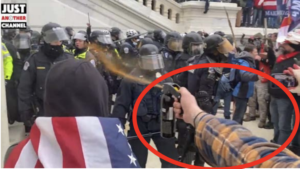 On January 7 he described his actions as being part of “What happened yesterday was the opening of a war. I was there and whether people will acknowledge it or not we are now at war.”

As I’ve noted repeatedly, Mehta is also presiding over the Oath Keepers, who all entered the East door and therefore would be among those kitted out people who violently pushed past Sidney Hemby. A few of the Oath Keepers are individually accused of assault. For example, video shows veteran Joshua James fighting with a cop in the Rotunda, screaming, “Get out! … This is my fucking Capitol!”

But members of the Stack who pushed past Hemby as he was protecting that door are suspected of far more serious plans for assault. As Mehta noted in ruling for the pre-trial detention of Stewart Rhodes on Friday — the same day he issued this ruling — once the Stack broke into the Capitol, they split up, with part of the group trying to make it to the Senate and the other part going to Nancy Pelosi’s office.

The latter is of particular concern because, on Election Day, Kelly Meggs told his wife and kid he was “gonna go on a killing spree … Pelosi first.” 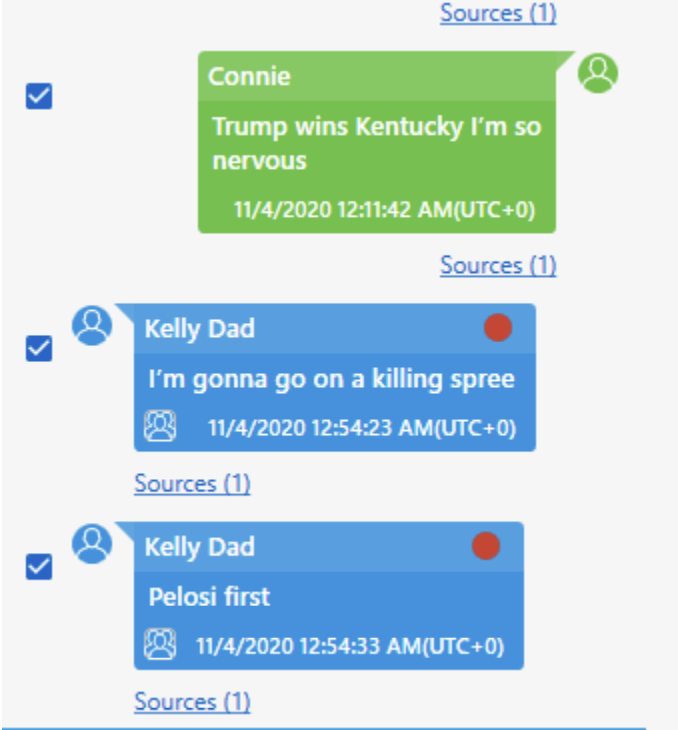 Then after he had gone to her office, he told someone (probably his kid again), that “we looked for[] her.” 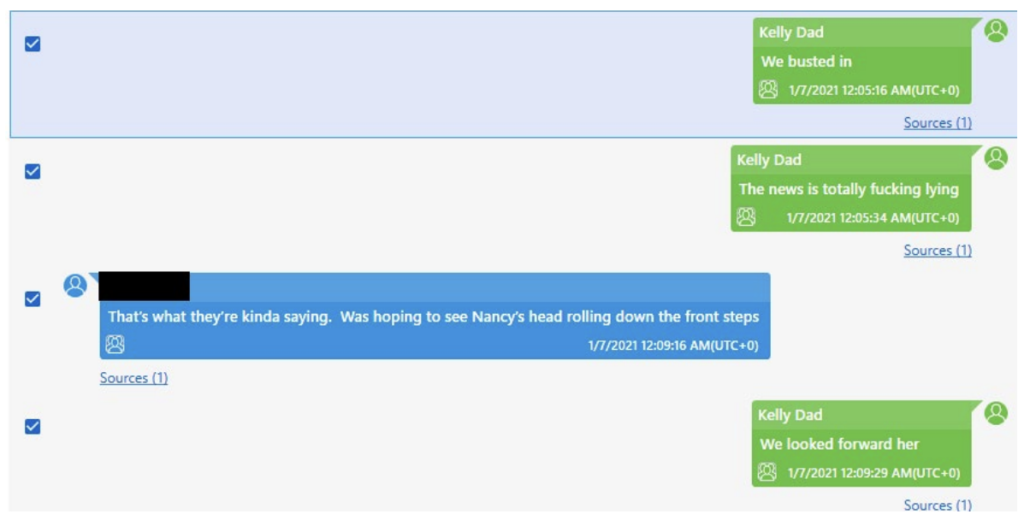 Judge Mehta has good reason to suspect (and likely knows far more about how serious this plot was) that the Oath Keepers, after busting into the Capitol past Hemby, took steps to hunt down Nancy Pelosi, and possibly someone in the Senate, like Pence.

When Judge Mehta says he thinks it is plausible that Donald Trump abetted assaults and threatened assaults at the Capitol, he’s not speaking abstractly. Judge Mehta has a very specific understanding of the kinds of assaults that happened that day. Those were  violent attacks on cops — several allegedly committed by military veterans and one by a retired NYPD cop. Those include a gratuitous attack on the media. It includes an attempt to hunt down the Speaker of the House.

With this ruling, Trump may be on the hook for such assaults civilly.

But given that the judge presiding over some spectacularly violent assaults that day has judged that Trump’s actions may rise to an aid and abet standard, it may make DOJ more seriously consider Trump’s exposure for such acts criminally.