If you don’t already have this number memorized or logged as a contact, have it tattooed on your body where you can see it. Afraid of needles? Use henna for a temporary tattoo. You’re going to need this number until Congress breaks before the mid-term elections.

The White House’s occupant was supposed to announce today the nominee to replace Justice Anthony Kennedy. Call your senators and tell them to refuse to hold hearings on this nomination.

If they are GOP, tell them it’s too close to the mid-term elections and the people deserve to have a say — in short, use the same argument Mitch “Turtlehead” McConnell used when he refused to hold a Judiciary Committee hearing to approve President Obama’s nominee, Merrick Garland.

If your senator(s) are Democrats or Independents, tell them they must deny a president who is under investigation any nominee to a lifetime seat as long as there is a cloud over the presidency. If they cannot fend off a Judiciary Committee hearing, insist they do not vote for any nominee who seeks to overturn Roe v. Wade. Nor should they confirm a justice who will not recuse themselves from any case against Trump or his campaign arising from Department of Justice investigations, nor should they approve a justice who believes the president is in any way above the law, immune in ways the public is not.

I’ve come to resist The Hill as it has become ridiculously biased, but this op-ed is worth a read: The ‘McConnell Rule’ is law, and Senate Democrats should sue to enforce it.

Live by Turtlehead’s rule, die by it.

Need a script for your calls? See Celeste Pewter at this link.

Your next call is again to your senators, this time on the nomination of Brian Benczkowski to the Department of Justice as Assistant Attorney General.

Senator Dick Durbin has already been working on this: 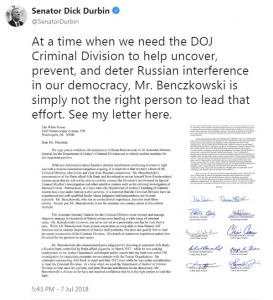 Read the letter’s text and the rest of his comments on Twitter at this link. Benczkowski’s nomination should be withdrawn; it is little more than another form of obstruction of justice.

This is another poisonous nomination; just as a president under investigation shouldn’t be permitted to appoint justices, neither should he be able to appoint nominees to the Justice Department with such serious conflicts related to the same investigation. Benckowski’s nomination is simply corrupt.

WHERE ARE THE CHILDREN?

Not the Thai students who’ve been trapped in cave but the thousands of children from infants to teens who have been separated from their asylum-seeking parents for no legal reason apart from institutionalized terror in the form of human trafficking.

The lack of a means to trace children as they were placed in camps, foster homes, gods know where else is a clear indication of intention: this administration meant for these children to be lost to their parents. This administration did not want to be held accountable by any tracking.

As I’ve said before, it’s criminal. Media shouldn’t expend one lick more time on scum like Alan Dershowitz (like The New York Times’ allocation of six journalists to his obstructionist ass) and instead should be hounding the government to find and unite these children with their parents, documenting application of immigration and asylum laws, and reporting on the creation of concentration camps (that’s exactly what they are).

Call your representatives in both houses of Congress and demand a legislative fix — Rep. Nadler’s Keep Families Together Act (HR 6135) and Sen. Schumer’s call for a Reunification Czar — to bar the executive branch from separating families. I also want to bar the use of military resources for this purpose.

See Celeste Pewter at this link if you need more overview and a script for calling.

Some of the children are being reunited under court order — like this one-year-old who appeared before a judge, alone — but if the government never had a plan in place to track children separated from families, how do we know all the children will be reunited?

Every Monday seems considerably worse, but I’m not going to face them on my knees. Instead I will be contacting Congress. What about you?