Because TV lawyers continue to wail that DOJ isn’t doing enough to investigate Donald Trump, I want to dumb down this post.

While TV lawyers have been wailing impotently that DOJ has been doing nothing to investigate Donald Trump, DOJ and the National Archives have been acquiring the communications behind some of the most damning events leading up to January 6. DOJ has been doing so even as the TV lawyers guaranteed us they would know if DOJ were doing such things, yet insisting that DOJ was not.

Consider just the events leading up to the December 18, 2020 series of meetings at the White House, involving Sidney Powell, Rudy Giuliani, and Mark Meadows, which some of the same reporters that reported it in real time are reporting as if it were new news.

According to the WaPo story on the grand jury investigation into Sidney Powell, a subpoena in that investigation issued in September asked for “communications and other records related to fundraising and accounting” related to Powell’s grift.

Federal prosecutors have demanded the financial records of multiple fundraising organizations launched by attorney Sidney Powell after the 2020 election as part of a criminal investigation, according to a subpoena reviewed by The Washington Post.

The grand jury subpoena, issued in September by the U.S. attorney’s office for the District of Columbia, sought communications and other records related to fundraising and accounting by groups including Defending the Republic, a Texas-based organization claiming 501(c) 4 nonprofit status, and a PAC by the same name, according to the documents and a person familiar with the investigation who spoke on the condition of anonymity to share details of the probe.

As part of the investigation, which has not been previously reported, prosecutors are seeking records going back to Nov. 1, 2020.

The subpoena reviewed by The Post was signed by Assistant U.S. Attorney Molly Gaston, who is also handling politically charged matters related to the Jan. 6 attack on the Capitol, including contempt of Congress charges brought against former Trump adviser Stephen K. Bannon for refusing to testify in front of the House committee investigating the pro-Trump riot. [my emphasis]

While the predication of that investigation seems to be based on Powell’s fundraising — soliciting money from dupes who believe her false claims of a stolen election — because proving that she knew those claims were false would require collecting everything about her efforts to manufacture false claims, it would get the communications explaining how to exploit those false claims as well. Plus, this September subpoena reveals just what DOJ did after moving to an overt phase. Prior to that, DOJ presumably obtained — first — preservation orders and — then — warrants on the emails that, according to Patrick Byrne, Powell claims she sent Rudy about her schemes.

On January 21 (a week before Trump started dangling pardons again), Sidney Powell’s lawyer revealed she is “cooperating” in that investigation, though in contemplating “cooperation” with the January 6 committee, she is reserving privilege claims about “advice” to Donald Trump.

A lawyer for Sidney Powell, a well-known, Trump-connected attorney, acknowledged that her organization’s fundraising connected to the 2020 election is subject to an ongoing federal criminal investigation.

Powell’s lawyer, Howard Kleinhendler, told CNN that his client “is cooperating” with the investigation into her organization, Defending the Republic, by the US Attorney’s Office in the District of Columbia. That cooperation includes “rolling productions” of documents.

Still, when the committee asks Powell about communications she had with Trump, that is “going to get a little hairy,” Kleinhendler told CNN.

He said Powell believes that the times Trump called her to ask for legal advice may be covered by attorney-client privilege — even if he never paid her to be his or his campaign’s lawyer. Powell never worked as a lawyer for the former President personally or for the Trump campaign, Kleinhendler said.

“We’ll have to deal with that, and we’ll have to try to discuss with the committee to see how” to handle privilege issues, Kleinhendler said.

Any emails obtained with a non-public warrant would be sent to a taint team that would review Sidney Powell’s privilege claims independently. Of particular interest, after Trump claimed Powell represented him on November 15, 2020, Rudy stated as clearly as he can manage on November 22 that, “Sidney Powell is practicing law on her own. She is not a member of the Trump Legal Team. She is also not a lawyer for the President in his personal capacity.” 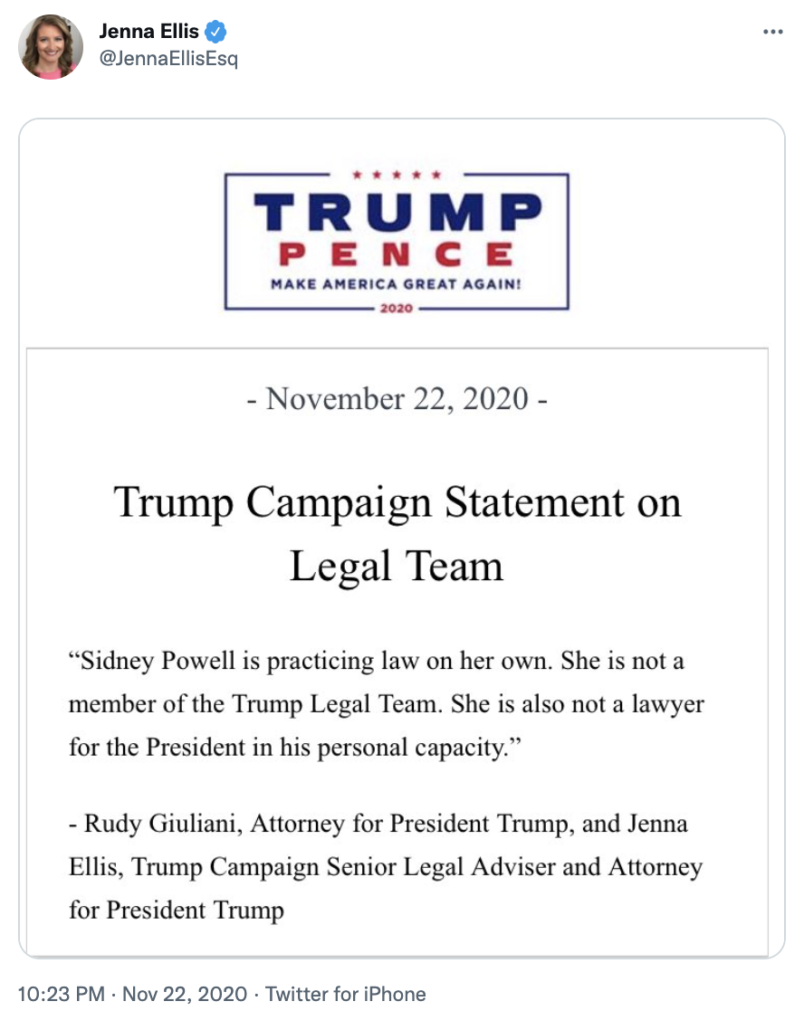 With that statement, Rudy effectively waived privilege for any communications implicating both of them from that date forward, long in advance of that December 18 meeting at which Powell purportedly told him about all the communications she sent him in the interim.

Similarly, most of these events post-date the time, November 25, when Powell can credibly claim to be representing Mike Flynn in an effort to nullify the consequences of his lies and foreign agent work, because that’s when Trump pardoned Flynn. So she may want to claim privilege, but after November 25, all visible basis for that claim was affirmatively gone, and for anything seized from her email provider, she’s likely not going to be involved in making that claim anyway.

As I previously noted, the prosecutor in charge of that investigation dropped off three other January 6 prosecutions by March 29 of last year (though there is at least one other investigation, the obstruction investigation into Capitol Police Officer Michael Riley, on which she was also working in the interim).

There continue to be some curious moves that suggest DOJ is shifting prosecutorial resources to unseen investigations in fairly urgent fashion.

Meanwhile, on January 21 (the same day that CNN reported that Powell was “cooperating” in the DOJ investigation, and so also a week before Trump started dangling pardons again), Special Master Barbara Jones reported on the progress of the privilege review of 16 devices seized from Rudy Giuliani on April 28, 2021.

Here’s a summary of what that review and the earlier known seizures of Rudy’s communications in the Ukraine-related investigation into Rudy:

Because of the temporal scope Judge Paul Oetken approved last year, Jones has completed a privilege review of all communications that date between January 1, 2018 through April 28, 2021 on 8 of the devices seized from Rudy (April 28 was the day the devices were seized). We can’t know what dates during which Rudy was using those 8 devices. It could well be that they were older phones with nothing recent.

Of particular note, Rudy at first tried to claim privilege over 56 items from phone 1B05. He thought better of those claims in 19 cases. And then, after Jones deemed 37 of them not to be privileged, he backed off that claim as well. During a period when Jones and Rudy’s team would have been discussing those 37 items, Judge Oetken issued a ruling saying that the basis for any privilege claims (but not the substance of the communications) would have to be public. After precisely the same kind of ruling in the Michael Cohen Special Master review, Trump backed off his claim of privilege for Cohen’s recording about the hush payments. That may be what persuaded Rudy to withdraw his claim of privilege over those materials here, as well.

And whether or not DOJ has already accessed the communications Rudy conducted during 2020 and 2021 on any of the 16 devices seized from him, we know all the phones Rudy was using in April 2021 are in DOJ’s possession and that Judge Oetken has already approved a privilege review to cover those communications.