Hold this thought: depicted above is a gun.

Like nearly every freshman student, I took my Economics 101 along with Intro to Business, Accounting 101, Intro to Marketing my first year of B-school.

This is when the indoctrination begins, when these squeaky-new eager beavers departing their teens are slowly steeped in the toxins of American-style business.

My first econ prof was fairly young himself; he was also an avowed libertarian. Everything he taught was colored with the perspective that government was a bad thing. My younger cohort went along without questioning this view.

And yet our prof had a difficult time saying government was bad when introducing us to  supply and demand curves. 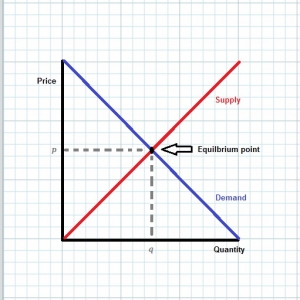 More supply, price goes down. More demand, price goes up. The degree to which the market is sensitive to price or demand is reflected in elasticity. Basic.

But then we were presented with the vertical demand curve — when the buyer will pay anything for the available supply, when demand is perfectly inelastic. 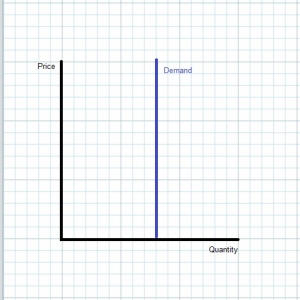 Libertarian prof called this extortion. The dutiful 18- and 19-year-olds in class nodded their heads, fighting a yawn. From the look of them none had experienced this caliber of threat.

Prof made a departure from “government is bad,” by insisting this is the point when government should regulate the market. He said it was illegal to base an exchange on forfeiting every claim to rights including one’s life; we prohibit extortion.

This is why health care should be regulated, he said. I was a little skeptical at the time; this was smack in the middle of the Reagan years and there wasn’t a lot of regulation on health care per se. If you got cancer there weren’t many options no matter how much money you had; doctors cut it out or tried to zap it with a limited range of therapies.

The risk then wasn’t the cost as much as the gamble of effectiveness. I lost a dear friend to the after-effects of available therapy; they survived a bone marrow transplant in the early 1980s but their immune system failed.

Decades later we have a sizable number of therapies for illnesses which are effective and keep people alive, but the number of people who suffer from some of these illnesses are so low that these drugs aren’t profitable. The Food and Drug Administration has helped in these cases — until now.

The “gun” in the image above is a money-or-your-life situation for patients with Lambert-Eaton Myasthenic Syndrome (LEMS), who may require permanent hospitalization or suffocate and die without this drug called Firdapse.

Thanks to the FDA calling Firdapse an “orphan drug,” the company which owns its intellectual property rights will now charge $375,000 a year for this medication.

One patient in Iowa said she’s willing to pay something for the medication but a year’s therapy is three times what her house is worth. She doesn’t know if her health care insurance will cover it.

This isn’t even your money or your life now — she doesn’t have the money.

She’s gotten the business end of the gun without any warning, after having benefited from the drug for years.

This is worse than extortion; it’s a death sentence for anyone who isn’t a billionaire. Yes, billionaire because someone worth a million can pay for a little more than two years of this drug and that’s it.

Why Catalyst, the company which owns Firdapse’s intellectual property, even bothered to buy this drug is beyond me. If the three million patients who currently rely on this drug can’t afford it, there’s no profit to be made, no recouping the cost expended to buy the rights to the drug.

With only a couple thousand billionaires in the world I find it hard to believe enough of them will develop LEMS and pay for Firdapse to make the acquisition worthwhile.

It’s not just an unethical business, creating a gun to hold and fire against the heads of LEMS patients.

It’s really stupid business to aim an economic gun at one’s self.

I wonder all these years later how many former B-school students struggle with the vertical demand curve lessons once they enter the real world.

And I wonder what the supply curve looks like when it comes to insulin, the price of which has jumped dramatically over the last few years so that it has become your-money-or-your-life proposition for many diabetics.