This week has been rife with bullshit. Here are three egregious examples.

Meditating on the sci-fi dystopian classic, Fahrenheit 451, I’ve pondered the cultural shift from a brick-and-mortar society to a digital society, in which text printed on paper has given way to internet-mediated electronic content.

What does a fireman look like in the age of the internet?

Apparently they still look like pasty white Nazis, like this one Trumpy-buddy and VA gubernatorial candidate Glenn Youngkin points to in Virginia – a racist mom whining about her poor baby boy whose fee-fees were hurt by an essential piece of American literature written by a Black woman author in which racism and slavery are central. 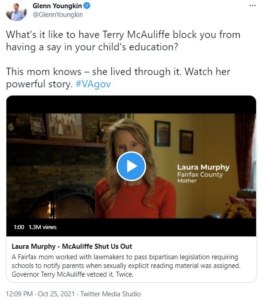 What a pity he can’t find a job after being so tormented by American literature…oh but wait.

The poor little teenager is now 27 years old and working as an attorney for the GOP. Perhaps Momma Murphy’s got a point – the kid’s intellectual growth was stunted by cognitive dissonance trying to make his artificially white privileged world meet literature reflecting the horror of enslavement upon which that white privilege was built. Now he can’t find a job anywhere except working for the party of racism in America.

Speaking of the Virginia governor’s race, Jonathan Turley had to stick his two cents in because he has a problem with attorney Marc Elias. 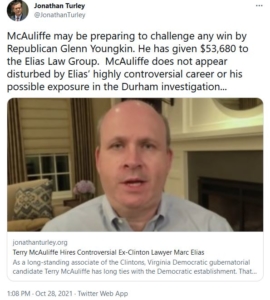 Turley’s bitchy little dig betrays not only his ignorance about John Durham’s pathetic investigation but his concerns about Elias, who successfully won 64 out of 65 lawsuits Trump’s campaign filed to unsuccessfully contest the results of the 2020 election.

Perhaps Turley’s really worried that at some point if all the investigations into Team Trump’s efforts to ratfuck and obstruct the 2020 election, Turley’s own supporting role may receive more attention than it has so far.

It’s still quite intriguing that Turley wrote an op-ed, Could Robert Mueller actually be investigating Ukrainian collusion? (The Hill, Feb 21, 2019) just after Rudy Giuliani met with Prosecutor General Yuriy Lutsenko in Poland, but just before The Hill’s John Solomon interviewed Ukraine’s prosecutor general Yuriy Lutsenko for Hill.TV during which Lutsenko made a false claim about U.S. Ambassador to Ukraine Marie Yovanovitch as part of a character assassination operation.

Such timely prescience coincidentally mirroring a Russian active measure reeks of bullshit. One might wonder if Turley’s, Giuliani’s, and Solomon’s 2019 phone records have a few overlaps.

And then there’s this bullshit which may be on another level altogether – Tucker Carlson’s disseminating a complete fabrication of another reality intended to obscure the attempted overthrow of the U.S. government. 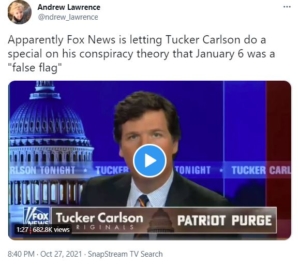 Sadly, it’s playing on televisions across military facilities and likely some federal offices, too.

It’d be nice if instead Carlson and the rest of Fox News’ toxic crap our federally-owned televisions were distributing our own content produced by the U.S. Agency for Global Media since its mission is to “inform, engage, and connect people around the world in support of freedom and democracy.”

Clearly it’s not Carlson’s or the Murdochs’ or News Corp’s mission to encourage freedom and democracy when they’re whitewashing insurrection and sedition. Their mission instead is flooding the zone with bullshit.

What’s the most egregious bullshit you’ve seen this week? Share in comments.