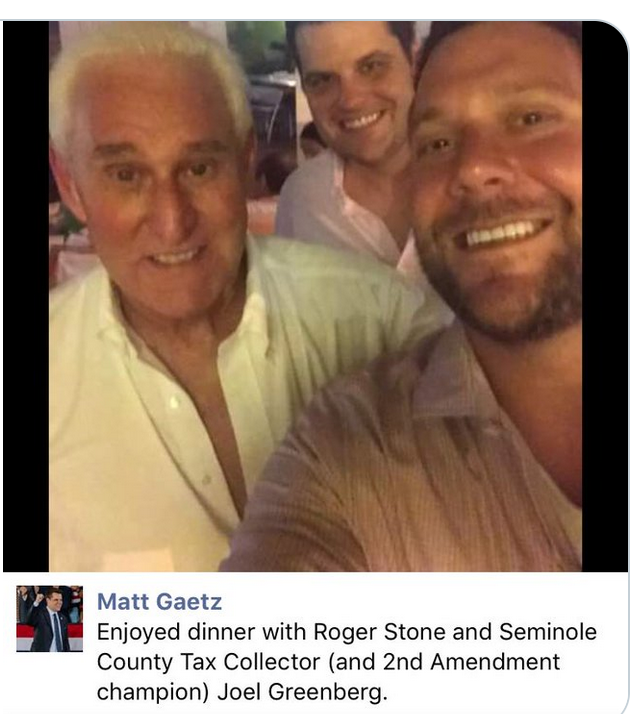 Joel Greenberg — the Roger Stone and Matt Gaetz associate who pled guilty in May 2021 to trafficking a minor, identity theft, wire fraud, stalking, and conspiracy — will be sentenced on December 1.

In accordance with a schedule set in July, when Greenberg last extended his sentencing date to expand the time he could cooperate with the government, DOJ submitted its 5K letter (in which it tells the judge how much credit Greenberg should get for his cooperation) on November 10. The government submitted its sentencing memorandum yesterday.

Greenberg’s sentencing memorandum was initially due yesterday as well, but his attorney, Fritz Scheller, got an extension until next Monday, in part so he could submit this response to the 5K letter.

Judge Gregory Presnell set a pre-sentencing hearing for November 30 to hear arguments about the proper guidelines to apply.

The government sentencing memorandum — which repeatedly seems to express amazement at how Greenberg kept criming even as he realized the government was hot on his trail — is worth reading on its own. Here are some highlights:

Greenberg had only just gotten started in his efforts to defraud the Tax Collector’s Office to fund his personal cryptocurrency purchases.

In January 2019, Greenberg told one of his family members that he was in “big trouble” and asked for $200,000. Id. at ¶ 102. Rather than repay the Tax Collector’s Office what he had obtained through his fraud, however, Greenberg used those funds to purchase more cryptocurrency for himself.

The one thing that Greenberg did not do, however, was stop his fraud. Greenberg continued to defraud the Tax Collector’s Office to obtain funds to purchase cryptocurrency for himself. His only reaction to the federal investigation was to alter his scheme.

As part of this scheme, Greenberg continued to sell the cryptocurrency machines that he had purchased with Tax Collector’s Office funds. In addition, Greenberg used some of the machines to mine cryptocurrency for himself. As part of those efforts, Greenberg used Tax Collector’s Office funds to build a server room in his personal office, and he operated some of the machines at the Lake Mary branch. Id. at ¶ 134. Because of how those machines were daisy chained together at the Lake Mary branch, they started a fire that damaged the machines and the branch office.

After he was released on pretrial supervision, Greenberg continued with his scheme, executing an SBA loan agreement for $133,000 only a day after he was ordered by a United States Magistrate Judge not to commit any new offenses.

It all feels like a Coen Brothers movie. Sex with minors, ecstasy, rat-fucking, and flaming cryptocurrency servers.

With regards to Greenberg’s cooperation, one of his crimes — stalking — deserves particular attention. When someone filed to run against him as tax collector, Greenberg manufactured a claim that his opponent was sleeping with a student.

In the midst of defrauding the Tax Collector’s Office, Greenberg added stalking to his repertoire of criminal activity. See id. at ¶¶ 138-147. On October 4, 2019, an individual who was a teacher at a school, filed to run for the elected office of Seminole County Tax Collector in 2020, against Greenberg. Id. at ¶ 138. In retaliation, Greenberg caused nine letters to be sent to the teacher’s school. The letters falsely represented that they were being sent by an anonymous “very concerned student” who had information that the teacher had engaged in sexual misconduct with a particular student. Id. at ¶ 139. The following month, in November 2019, Greenberg set up a Facebook account that falsely claimed to belong to a “very concerned teacher” at the school. Using that account, Greenberg made similar false allegations to the ones previously made in his letters. Id. at ¶¶ 143-145. Further, he created an imposter Twitter account, using the name and photograph of his political opponent, without the teacher’s knowledge or consent. Greenberg then published, using that account, a series of racially motivated posts that he falsely represented were being made by the teacher, and representing that the teacher was a racist. Id. at ¶ 142.

This is classic Republican projection and rat-fuckery. But it is also a really damaging confession for anyone who might want to turn snitch in the future.

I’m sure Greenberg knows all sorts of things about what his sleazeball buddies have done and shared some of it with prosecutors. But the fact that Greenberg manufactured false allegations against someone would make him really easy to discredit as a witness about anything for which there wasn’t a whole bunch of independent documentation. Prosecutors use fraudsters as cooperating witnesses all the time, but to do so they need a bunch of corroboration, because otherwise jurors aren’t going to believe the claims of someone who confessed to manufacturing false claims for personal gain in the past.

With that said, I wanted to look closer at the sentencing dispute. Greenberg thinks his cooperation has been more valuable than the government has given him credit for. Partly, that’s because he thinks he should get a 4-level reduction for each of what he says are seven prosecutions he has been a part of (or will be as downstream conspiracy prosecutions progress or would have been had the defendant not died), rather than the 10-level reduction the government says he should get for all his cooperation. Partly, he thinks the mandatory 2-year minimum for the identity theft he pled to, which would be consecutive to his other sentence, should be set aside given his cooperation.

But as Greenberg’s and all other plea agreements make clear, he doesn’t get to decide.

[T]he defendant understands that the determination as to whether “substantial assistance” has been provided or what type of motion related thereto will be filed, if any, rests solely with the United States Attorney for the Middle District of Florida, and the defendant agrees that defendant cannot and will not challenge that determination, whether by appeal, collateral attack, or otherwise.

The United States has acknowledged the value added as a result of the defendant’s cooperation, and to reflect the significance of his assistance, the United States has moved for a 10-level reduction in his offense level. This is however, where his mitigation and reasons for any type of reduction in offense level should end. Considering all of the above referenced information including (1) the nature and circumstances of the instant offenses, (2) the defendant’s history and characteristics, and (3) the need for the sentence imposed to provide just punishment, adequate deterrence, respect for the law, and protection of the public, the United States respectfully submits that no downward variance is warranted.

It’s the “substantial assistance on other matters discussed in the sealed Supplemental Memorandum Regarding Defendant’s Cooperation” we’re all particularly interested in, what, in Greenberg’s response, he calls “an entire universe of malfeasance, corruption, and depravity.”

This is the stuff, including the Gaetz sex trafficking allegations, that has shown up in the press.

Most recently, it showed up — with an on the record quote from Scheller boosting the import of Greenberg’s cooperation — in a NYT story on multiple January 6 prosecutors’ investigation of the ties between January 6 and the 2018 Stop the Steal effort.

In recent months, prosecutors overseeing the seditious conspiracy case of five members of the Proud Boys have expanded their investigation to examine the role that Jacob Engels — a Florida Proud Boy who accompanied Mr. Stone to Washington for Jan. 6 — played in the 2018 protests, according to a person briefed on the matter.

The prosecutors want to know whether Mr. Engels received any payments or drew up any plans for the Florida demonstration, and whether he has ties to other people connected to the Proud Boys’ activities in the run-up to the storming of the Capitol.

Different prosecutors connected to the Jan. 6 investigation have also been asking questions about efforts by Mr. Stone — a longtime adviser to Mr. Trump — to stave off a recount in the 2018 Senate race in Florida, according to other people familiar with the matter.

Mr. Gaetz, Republican of Florida, participated in the 2018 demonstration, but the extent and nature of his involvement remain unclear.

Fritz Scheller, a lawyer for Joel Greenberg, a local Florida tax collector who is cooperating with the government in an investigation into Mr. Gaetz, declined in response to questions to discuss the specifics of what his client told the authorities about the 2018 incident. Still, Mr. Scheller said, “A significant aspect of Mr. Greenberg’s cooperation has been his assistance in matters involving efforts to subvert the democratic process.” [my emphasis]

What is going on overtly in this sentencing dispute, with Greenberg arguing for the value of his cooperation, likely parallels what has generated a lot of press coverage (particularly about any sex trafficking case against Gaetz) in recent years. We likely got stories about “an entire universe of malfeasance, corruption, and depravity,” including the expectation that Gaetz would be indicted, because those close to Greenberg were trying to raise the value of his cooperation in the public sphere and pressure prosecutors for an indictment of Gaetz, which would have increased the credit he’d get for cooperating, another 4-level sentencing reduction, Greenberg says it would have gotten him.

None of that’s to say that Greenberg’s cooperation hasn’t been corroborated (on some points) or valuable: The government explicitly says he was “truthful” and uses the phrase, “substantial assistance,” that prosecutors use to describe real meat, often meat that they expect will lead to indictments.

It’s just that at this moment, the first time the government has been able to say publicly how valuable they think Greenberg’s cooperation is in the face of all the sex, ecstasy, rat-fucking, and flaming cryptocurrency servers that Greenberg pled guilty to, they say all that truthful and substantial assistance doesn’t outweigh the fraud as much as Greenberg would like it to.

None of that says Gaetz is in the clear, though the report that federal prosecutors won’t charge him for the sex trafficking because, “a conviction is unlikely in part because of credibility questions with the two central witnesses,” accords with what we see in the sentencing memo. Greenberg would have particular credibility problems on that count because Greenberg manufactured a claim of sex crimes in the past.

That said, I find it interesting that Gaetz decided, at the last minute, not to attend Trump’s rally in Florida last night, purportedly because of rain that wasn’t affecting travel in the least. And in Scheller’s motion for an extension, he described five hours of work with federal and state prosecutors (which may or may not relate to Greenberg), but also resolving an unexpected issue that might impact Greenberg’s sentence.

Additionally, the undersigned is currently in the process of resolving an unexpected issue (both today and tomorrow) that could impact Mr. Greenberg’s sentence.

So there may be recent developments of interest, developments that had to wait until courthouses could be opened after rain that was affecting travel.

I hope we’ll get a slew of new titillating new stories about Joel Greenberg’s universe of malfeasance, corruption, and depravity when that sealed cooperation memo is unsealed (or, better yet, if it leads to indictments). But for now, the advent of this sentencing dispute is a helpful reminder that the motives that drive reporting often require overselling the value of the testimony of an admitted fraudster.