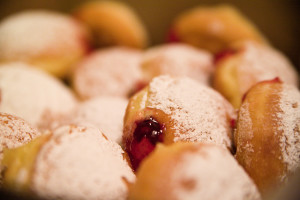 Mardi Gras. The day before Ash Wednesday. Fat Tuesday. In Brazil, it’s Carnival — plenty of parades with costumed dancers and samba. In New Orleans, it means king cake, beads, and more parades, but here in Michigan, it means pączki. No parades in the snow, just an icy trek to the Polish bakery for some decadent sweets we get but once a year.

I’m still drafting this, too much stuff to weed through this morning. I’ll update as I write. Snag a cup of joe and a pączki while you wait. Make mine raspberry filled, please!

Economic indicators say “Maybe, Try Again”
Asian and European stock markets were a mess this morning. There’s no sign of an agreement between OPEC nations on production and pricing, which may lead to yet more floundering in the stock market. Yet one indicator — truck tonnage on the roads — doesn’t show signs of a recession in the U.S.

Facebook: French trouble, and no free internet in India

Boy kicked out of school because of his DNA
This is a really sad story not resolved by the Genetic Information Nondiscrimination Act (GINA). The boy has cystic fibrosis; his parents informed the school on his paperwork, as they should in such cases. But because of the risks to the boy or his siblings with similar genes, the boy was asked to leave. GINA, unfortunately, does not protect against discrimination in education, only in healthcare and employment. This is a problem Congress should take up with an amendment to GINA. No child should be discriminated against in education because of their genes over which they have no control, any more than a child should be discriminated against because of their race, gender identity, or sexuality.

All right, get your party on, scarf down the last of your excess sweets, for tomorrow is sackcloth and ashes. I can hardly wait for the sugar hangover to come.