On Saturday, I noted that the move by US Special Operations forces to halt training of Afghan Local Police and Afghan special forces while those entire forces were re-screened for security threats meant that there would need to be an equivalent action taken on the larger effort to train the Afghan National Army and Afghan National Police while they are re-screened:

Even though it was a holiday weekend, it is remarkable that Pentagon Spokesman George Little was taken so off-guard in this line of questioning that Marcy pointed me to in Tuesday’s transcript:

Barbara, do you have a question?

Q:  Thanks, two questions.  On green-on-blue or insider attacks, what I didn’t hear you mention was that — what ISAF tells us is essentially all 350,000 Afghan security forces either have gone or are going through the process of being re-screened.  And that comes from ISAF.  So what would you — what does — what do you say to the families who have lost loved ones or their colleagues in the military after so many incidents this year alone?  Who’s accountable for it taking so long for the U.S. military, for the coalition to realize they had to re-screen?  Because for months, we were told isolated incidents, and apparently not.

MR. LITTLE:  Well, let me put this in some perspective here, Barbara.  It’s not that we have come only recently to this issue.  We’ve taken it seriously for some time.  In March of this year, six months ago, the — ISAF issued a tactical directive — and let me just list all that that tactical directive contained.  It made it the adoption of specific and tailored force protection measures.  Personnel and increased risks from insider attack were required to undertake specific close quarter combat and active shooter training.  All commands are required to conduct refresher training, particularly for mentors and others who routinely work side-by-side with Afghans.

The directive required additional in-theater cultural awareness training.  The directive also asked that coalition force units create safe zones inside ANSF compounds where they can defend themselves if necessary.  And more recently, there’s been a great deal of focus by General Allen and his team on the importance of Guardian Angels, small unit leadership, and counterintelligence matters that will help identify potential attackers early on.

Q:  But why did it take — and I have a follow-up to this, please — why did it take so long for the military in the department to come to the conclusion that 350,000 troops had to be re-screened?  Why did (off mic)

Just about every outlet that reported on George Little’s whine about Matt Bissonnette’s book yesterday claimed that Little had said there was “classified” information in the book.[all emphasis in this post mine]

CNN: A Pentagon official said Tuesday that a former Navy SEAL who helped kill Osama bin Laden included classified material in his new book and did not follow protocol for pre-publication review.

AP: George Little said that an official review of the book, “No Easy Day,” determined that it reveals what he called “sensitive and classified” information.

Fox: “Sensitive and classified information is contained in the book,” Pentagon spokesman George Little told reporters in Washington. “It is the height of irresponsibility not to have this material checked.”

The reality is far more telling. Little did not commit to saying there was classified information in the book until cornered after repeated questions by the press. The transcript is worth reviewing in more detail since, if this ever gets litigated, Little’s hesitation to claim the book included classified information will become an issue.

In response to the first question on Bissonnette’s book, Little gave what was probably his rehearsed answer to it. He focused on Bissonnette’s failure to do a prepublication review (remember, Bissonnette’s lawyer, Bob Luskin, says such a review was recommended but not required). And when discussing the actual review, Little said there was sensitive information; only later, speaking more generally, did Little say “sensitive and classified.”

George, on the separate issue, on the SEAL book, has the department made a decision yet on whether to take any legal action regarding this and on whether or not there is classified material in the book, and if there — if, indeed, you’ve determined there is, can you tell us what it is and what action may or may not be taken at this point?

MR. LITTLE: Thank you very much, Lita, for that question. We continue to review our options when it comes to legal accountability for what in our estimation is a material breach of nondisclosure agreements that were signed by the author of this book.

With respect to the information that’s contained in the book, people inside the department have read it. And we do have concerns about some of the sensitive information that we believe is contained in it. I’m not going to get out ahead of what the process going forward might be and what options we might decide to pursue, but this is a very serious concern that we have.

When it comes to sensitive special operations missions, such as the operation that took down Osama bin Laden, it is important that those who are involved in such operations take care to protect sensitive and classified information. And if I had been part of the raid team on the ground and I had decided to write a book about it, it wouldn’t have been a tough decision for me to submit the book for pre-publication review. That is common sense. It’s a no-brainer. And it did not happen.

Thus far into the process, the press wasn’t buying Little’s slight of hand. He gets a followup on the sensitive/classified distinction, which he dodges by focusing on pre-publication review again.

Q: Will you — just as a follow-up — you made a distinction between sensitive and classified. So is the determination that it is sensitive information there and not classified? And also, is there any determination on whether the book will be sold on — on bases (off mic)

MR. LITTLE: There’s been no directive from this department to withhold sale of the book from military exchanges. This book is being made widely available in bookstores and online. It is not our typical practice to get into the business of deciding what and what does not go on bookshelves in military exchanges. But that doesn’t mean in any way, shape or form that we don’t have serious concerns about the fact that this process of pre-publication review was not followed.

END_OF_DOCUMENT_TOKEN_TO_BE_REPLACED 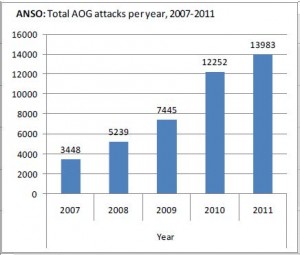 Of 52 U.S. and NATO troops killed this year in Afghanistan, nine were apparently killed by Afghan forces or impersonators. END_OF_DOCUMENT_TOKEN_TO_BE_REPLACED