From George Zimmerman to Dylann Roof to Bryce Williams

In a manifesto sent to ABC today, Bryce Williams — who shot several people on camera this morning before escaping then killing himself just before he was apprehended — explained that the Charleston Church shooting had been his last straw.

In the 23-page document faxed to ABC News, the writer says “MY NAME IS BRYCE WILLIAMS” and his legal name is Vester Lee Flanagan II.” He writes what triggered today’s carnage was his reaction to the racism of the Charleston church shooting:

“What sent me over the top was the church shooting. And my hollow point bullets have the victims’ initials on them.”

It is unclear whose initials he is referring to. He continues, “As for Dylann Roof? You (deleted)! You want a race war (deleted)? BRING IT THEN YOU WHITE …(deleted)!!!” He said Jehovah spoke to him, telling him to act.

In his own manifesto, Dylann Roof attributed his own radicalization to white supremacists’ reframing of the Trayvon Martin killing.

The event that truly awakened me was the Trayvon Martin case. I kept hearing and seeing his name, and eventually I decided to look him up. I read the Wikipedia article and right away I was unable to understand what the big deal was. It was obvious that Zimmerman was in the right. But more importantly this prompted me to type in the words “black on White crime” into Google, and I have never been the same since that day. The first website I came to was the Council of Conservative Citizens. There were pages upon pages of these brutal black on White murders. I was in disbelief. At this moment I realized that something was very wrong. How could the news be blowing up the Trayvon Martin case while hundreds of these black on White murders got ignored?

Meanwhile, George Zimmerman is selling Confederate Flags to help protect what he sees as the First and Second Amendment rights of a gun shop owner who  has declared his shop Muslim-free.

Update: And now Zimmerman has weighed in: 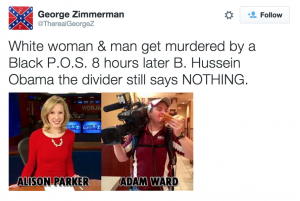