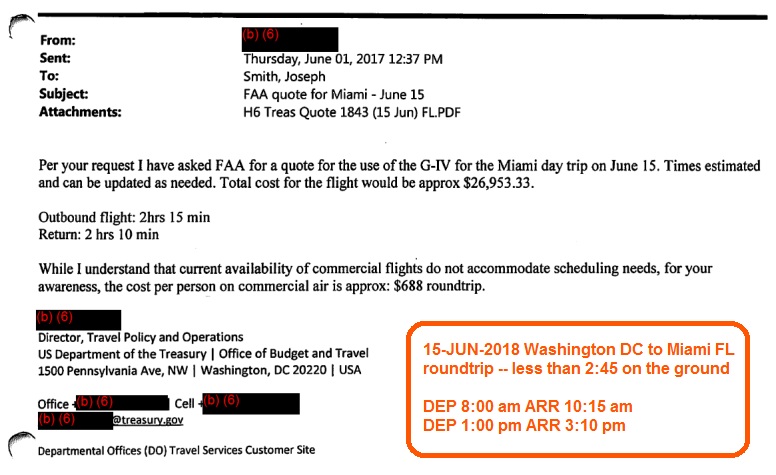 Usually when I pull together a Three Things post they’re unrelated topics worth a quick look but not necessarily a full-blown post. This time these three things are related and I can’t write a post on each one because my blood pressure won’t handle it, thanks to Moochin’ Mnuchin.

Citizens for Responsibility and Ethics in Washington (CREW) recently FOIAd Treasury Secretary Steve Mnuchin’s travel data. You’ve probably heard by now about his use of military aircraft for eight trips costing nearly one million dollars. CREW looked at the regulations covering government travel and authorization for spending. Take the time to read their work, it’s worth the effort.

And then read the FOIAd records CREW shares, but only after you’ve taken your blood pressure medications and/or prepared for a tooth-grinding tension migraine. There were repeated indications to Mnuchin and staff these trips were expensive — one cost $26,953.33 when commercial airfare for the same trip was $688 per person.

It’s this trip which first made me do a double take, because Mnuchin’s plane was on the ground in Miami on June 15, 2017, for a mere two hours and 45 minutes or less. 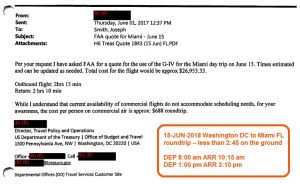 Mnuchin traveled to Miami to attend the Conference on Prosperity and Security in Central America held at FIU’s campus, roughly 15 minutes by car from Miami International Airport. Assuming the travel times were prompt and on the mark, Mnuchin made it to the conference for a fucking two-hour lunch.

But get this — here are the other U.S. attendees at this event:

Mnuchin was a bloody co-host. Why did he not travel with one of the other co-hosts? Why did he have to commission his own military aircraft instead of tagging along with another cabinet member? Or even the vice-president?

Mnuchin’s use of military aircraft was repeatedly justified by the need for secure communications. The June 15 trip to Miami was one such occasion; a call on the return leg needed an aircraft on which persons without adequate security clearance would be traveling. 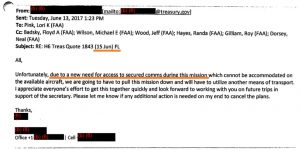 CREW noted this as well:

Two days before the scheduled departure, Treasury advised the FAA that “due to a new need to access to secured comms during this mission, which cannot be accommodated on the available aircraft, we are going to have to pull this mission down and will have to utilize another means of transport.” (UST 00024). The call was scheduled during the two and one-half hour return flight (UST 000063). The use of a military aircraft increased the cost of the approximately two-hour flight to $45,136 (UST 00003). In other words, a scheduling conflict that the Secretary apparently did nothing to avoid cost the government an additional $18,000. Of note, the five listed individuals on the manifest could have made the same trip on a commercial aircraft for approximately $3,440 (or $688 per person, UST 00001). …

Again, Mnuchin was a conference co-host. There were other cabinet members traveling to Miami. What was so bloody important that he couldn’t travel earlier with the rest of the U.S. co-hosts? Why did Mnuchin schedule a call needing secure communications two days before the trip?

And why over the last year was there repeated insistence on the availability of secure communications, unlike Mnuchin’s predecessors? What changed so dramatically about the Treasury Secretary’s job?

What might have been happening on June 15 about which Mnuchin knew more than 48 hours in advance?

Remember last year when I noted the odd timing of Jared Kushner’s unannounced, unpublicized trip to Saudi Arabia during which he had a pajama party of sorts with Crown Prince Mohammed bin Salman where they discussed who knows what?

It seemed quite the coincidence that Kushner arrived during Treasury Secretary Mnuchin’s publicized trip to Saudi Arabia. What incredible timing!

Except it wasn’t a coincidence. Our forgetful Boy Wonder was on the same goddamned military aircraft with Mnuchin, who had insisted on a military plane for access to secure communications.

Here’s a screenshot from page 57/126 (from document 2018-2-15-Production-redactions-applied.pdf via CREW), an amended request to White House by Treasury for mission support, required to obtain a military aircraft. Note the Requesting Principal and the trip’s purpose as well as the date, August 31: 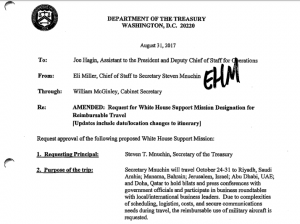 Here’s a screenshot of page 59/126 from the manifest included with the same amended request: 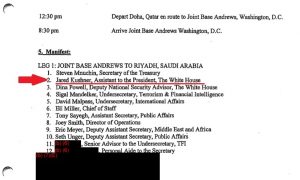 Kushner isn’t mentioned in the request or the agenda except as a line item in the manifest; he appeared to be included in every leg of this trip, including a visit to United Arab Emirates and Qatar. There’s an awful lot of redacted material related to this trip, too, big swaths blanking out what could be entire emails or attachments.

Worth noting the FOIAd documents dated July 25 reflect this Middle East trip was originally scheduled for September; by August 31 the trip has been pushed back to October. The mission requested a plane with secure communications capability from the first, which does make sense in this case given the level of discussions being held between Treasury Department, Saudi Arabia, UAE, and Qatar.

But the frequent insistence on secure communications capability and Kushner’s presence on this October trip spawns several questions: is the use of military aircraft a flying backchannel? Is Mnuchin equally invested in the use of a backchannel?

Was this trip really another negotiation related to the blockade of Qatar and was Kushner involved for that reason? Is this why his presence wasn’t openly communicated?

And then there’s the possibility Moochin’ Mnuchin took his spouse, our generation’s Marie Antoinette, for a vacation in Edinburgh, Scotland and other European locations using one of our military aircraft. I may have an aneurysm if I don’t stop here. Just look at the itinerary on page 66/126 and tell me what you make of it. I can’t find coincident formal events scheduled for Scotland or Italy, or for virtual attendance during this trip’s time frame. CREW reported the trip was their goddamned honeymoon (modifying epithet all mine). 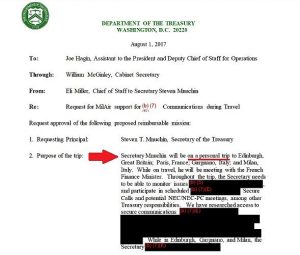 Did Mnuchin and Linton seriously tie up a military aircraft so they could go walkabout in Scotland? Let me guess Linton is a big fan of the premium cable show Outlander and she wanted to take in the show’s shooting locations. The sole argument presented for the use of our military aircraft is “to be able to monitor issues [redacted], and participate in scheduled [redacted]” and the need for access to secure communications.

Don’t we have an undersecretary or a deputy to do whatever [redacted] so Mnuchin can take his honeymoon on his own time, on his own dime? Or is [redacted] something in which nobody else should be involved?

Go ahead and argue this trip request says it’s a “reimbursable mission.” This request is dated August 1, and his trip was from August 3 through August 12. This means our government personnel had to drop everything else they were doing during what is traditionally a short-staffed month and scramble to get this aircraft and crew and flight plan together for his damned honeymoon.

I suppose I should be less surprised by this wasteful crap bordering on theft after Mnuchin unnecessarily flew by military plane with the same high maintenance prima donna spouse to Fort Knox, just in time on August 8 to observe the rare complete solar eclipse.

I’m still suspicious of Mnuchin’s need for an entire bloody military plane and crew for his honeymoon so he has access to secure communications. Again, is this a flying backchannel he’s using? Does his wife have a security clearance necessary to hear whatever it is that’s so secret that he has to do it while on his honeymoon?

This is an open thread. Bring your pitchforks and torches.