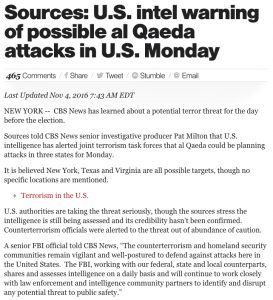 This morning, CBS published a story attributed to senior producer Pat Milton, who has done a lot of FBI-based stories (and co-produced fawning 60 Minutes interviews with John Brennan and Jim Comey), reporting on a possible terrorist attack. The story described the threat with specific detail — scheduled for Monday, in maybe NY, TX, or VA — but even while explicitly stating that “its credibility hasn’t been confirmed.”

It is believed New York, Texas and Virginia are all possible targets, though no specific locations are mentioned.

U.S. authorities are taking the threat seriously, though the sources stress the intelligence is still being assessed and its credibility hasn’t been confirmed. Counterterrorism officials were alerted to the threat out of abundance of caution.

The version published at 7:43 AM (and screen captured to the right) clearly attributed the story to a senior FBI official. (I’ve bolded the differences.)

A senior FBI official told CBS News, “The counterterrorism and homeland security communities remain vigilant and well-postured to defend against attacks here in the United States.  The FBI, working with our federal, state and local counterparts, shares and assesses intelligence on a daily basis and will continue to work closely with law enforcement and intelligence community partners to identify and disrupt any potential threat to public safety.”

The version published at 12:52 rewrote that paragraph, obscuring that FBI was the source.

“While we do not comment on intelligence matters, we will say the counterterrorism and homeland security communities remain vigilant and well-postured to defend against attacks here in the United States,” a U.S. intelligence official told CBS News. “The FBI and DHS, working with our federal, state and local counterparts, share and assess intelligence on a daily basis and will continue to work closely with law enforcement and intelligence community partners to identify and disrupt any potential threat to public safety.

This story, leaked by a senior FBI official who “doesn’t comment on intelligence matters” but nevertheless did just that, comes at the end of the crappiest week for the FBI in decades.

At this point, it is fair to argue that the intelligence community — including people leading it today — have capitalized on a terrorist threat, even a dodgy one. As I tweet stormed this morning (and wrote in more detail here), in 2004 the government played up two dodgy election year threats.

In March 2004 (just as torture, spying cut back) fabricator went to CIA in Pakistan and said, “Janat Gul wants to attack US elections.”

Someone in CIA immediately said, “Nah!” Nevertheless, US got PK to detain, turn Gul to US to be tortured.

USG (including Jim Comey) reauthorized torture, to be used with Gul. Including waterboarding & techniques CIA had already used w/o approval.

USG (including Comey & John Brennan) also used election year plot based off fabrication as one reason FISC had to approve Internet dragnet.

There were, of course, leaks to the press about this election year plot.

CIA kept torturing and torturing Janat Gul, because they needed details of an election year plot based off a fabrication.

It wasn’t until October that someone said, “Hey, let’s go check if that guy claiming Gul wanted to attack US election was lying!” He was.

But Gul had served purpose: election year scare, reauthorizing torture, getting FISC approval for dragnet. Not bad for one torture victim!

Comey signed off on torture again, including waterboarding w/o knowing that that case was all based off a fabrication.

But Comey has also refused to read torture report, which lays all this out. He’s avoiding learning what he did in 2004, 2005. Brennan too!

I lay all this out bc, w/history like this, IC (still led by Brennan & Comey) should be VERY careful abt leaking election year plots.

Succinctly: They cried wolf in 2004. And have yet to face accountability for that.

Then, in 2006 (at a time when both Comey and Brennan were on hiatus from directly government work, though they were both working with key government contractors), it happened again. Dick Cheney triggered the revelation of a very real terrorist plot in 2006 — fucking over the British officials trying to collect enough information to prosecute the perpetrators — to help Joe Lieberman stay in the Senate.

The point is, these people, including the people in charge of the IC now, have selectively exploited real or imagined terrorist plots before. The leak of this one, which FBI clearly hasn’t even vetted, sure seems exploitative given how badly FBI needs to distract from its own fuck-ups.