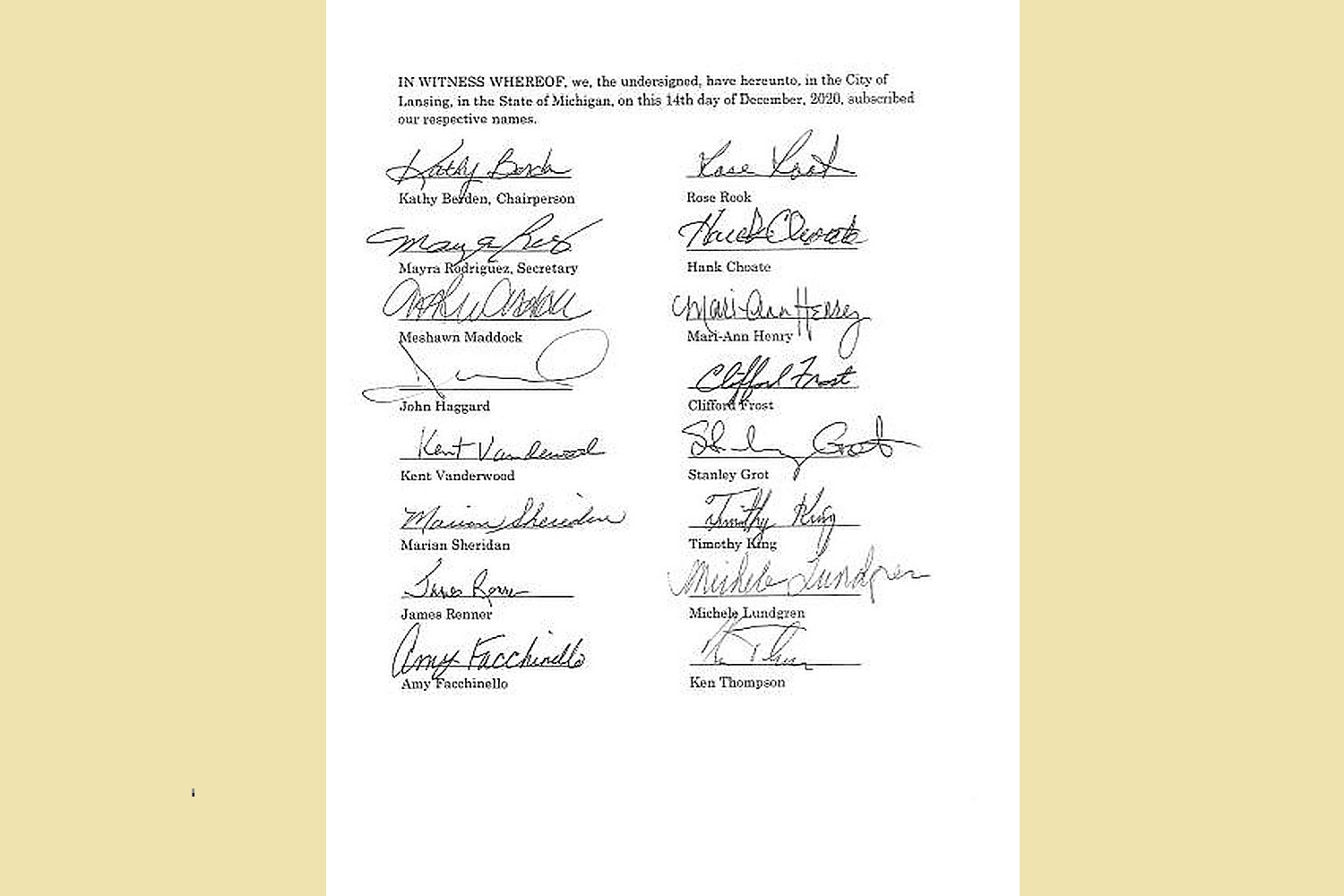 [NB: check the byline, thanks. Update(s) will appear at the bottom of this post. /~Rayne]

David Waldman (a.k.a. @KagroX) made an interesting point on Twitter:

Keep in mind that in most of the states where they forged Electoral College certificates, the “electors” are VERY PROMINENT REPUBLICANS.

That is perhaps… I don’t know… a useful point? https://t.co/1ME9dbp9VE

If you’re active in a political party this may seem obvious. Having been a party committee member and a delegate, I took for granted most folks would intuit this. A political party won’t have any Average Joe off the street attest to the party’s business; they’ll encourage and/or pick someone they trust who’s an insider.

And in the case of my home state, that’s exactly what happened. The MIGOP picked electors who are active in the party either on committees and/or public officials either elected or appointed.

Which means all these folks who signed the false certification attesting fraudulently to Trump’s win of a majority of Michigan’s votes are highly relevant to the party. They are:

These aren’t exotic fruit bats out in the far right-wing hinterlands; they’re the heart of the Michigan Republican Party.

There are several interesting tidbits about this roster. The first is that two of these folks were replaced by others even though they had been elected in November to their role as electors.

Gerald Wall is the Roscommon County Republican Party Chair. Granted, it’s a less populous county in northern central Michigan, but removing the county chair is a bit of a statement to a fairly red county.

The second replacement raised my eyebrows because Terri Lynn Land was Michigan’s Secretary of State for eight years. She’s had the support of the DeVos family — yes, including Erik Prince’s sister Betsey DeVos nee Prince — receiving campaign donations over multiple terms and candidacies for other public office.

Why were these two elected electors removed and replaced with “alternate” electors James Renner and Ken Thompson — the latter for whom I can find little information.

The slate of candidates running for the legitimate post of Republican electors — assuming a Republican won Michigan’s popular vote — had been contacted for profiles by the Detroit Free Press ahead of the November 2020 election. Several did not respond or refused to be interviewed; what’s indicated here was collected from the internet.

But there’s nothing about the swap of two electors for these new “alternate” electors. One might wonder if either Gerald Wall or Terri Lynn Land refused to serve as electors once a false certification was prepared.

The doozy out of this group is the Michigan Republican Party co-chair Meshawn Maddock, wife of state representative Matt Maddock, by whom it has been said the MIGOP had been radicalized.

You’ll want to read this thread by Karen Piper, who profiles Meshawn while connecting more than a few dots:

One of the fake elector signatories is known for radicalizing the Michigan GOP. She is now co-chair of the MI Republican Party. 1/ https://t.co/P02Q08X7kA

Maddock’s relationship with Amy Kremer — she of the three-burner-phones and the Willard Hotel — and multiple right-wing protests at Michigan’s state capitol building is particularly interesting. It’s as if the April 15, 2020 drive-in gridlock protest rally and the armed militia protest rally inside the capitol on April 30 were practice runs for the January 6, 2021 insurrection.

If I thought I had standing and a reasonable chance at winning I’d sue each one of these “alt-electors” for attempting to steal the 2020 Michigan presidential election from me and every Michigander who voted for a candidate other than Trump. I’d sue because so many volunteers who are neighbors, friends, and family members honorably worked to ensure a safe and secure election, and these radical right-wing members of the MIGOP tainted their efforts, cast aspersions on our state, and nearly stole our civil rights after we had to put up with weeks of harassment to get to certification.

“She is nuts. Her husband is nuts. They are crazy, stupid, and mean,” Timmer tells Metro Times. “They think they are saving the world.”

Hope Meshawn has a good lawyer; for some reason I don’t think she’ll get much assistance from some of the old school MIGOP.

First, let me give a shout out to the folks over at AmericanOversight[.]org for liberating the fake electoral vote documents via a FOIA to the National Archives. Several folks have noticed the similarities between the documents. I believe we can make some reasonable judgments about the provenance of these documents that will contribute to our understanding of the overall election conspiracy. Even though all we have is a scanned images pdf, if we analyze the documents with attention to the similarities and differences, we can deduce something about how those documents were produced. If you want to follow along, head over to the American Oversight website and grab a copy of the pdf I’m referencing at /american-oversight-obtains-seven-phony-certificates-of-pro-trump-electors

TL;DR version: These fake electoral certifications all came from a single source and there’s a way to prove it.

The first thing to note is that each of those pages is using the same font (with one slight twist that’s very revealing): Baskerville Old Face. That’s a good choice if you want to give your documents a 1776 feel. You see, it’s a digital font based on a lead type design that was first appeared in 1766.

When you start looking closely, you’ll notice that each state’s wording following the title is slightly different. However, they’re all set in Baskerville. In particular, note the “For President” and “For Vice President”. Those are formatted as small caps (the lowercase letters are replaced with smaller versions of the uppercase letters). Do you suppose seven or eight different people all managed to correctly use small caps formatting? Me, neither.

Someone created a digital file (almost certainly a Microsoft Word document) and sent it to the fake electors to fill in. There’s no other explanation for the similarities in the documents. And it’s not just that page. There was even a template for filling vacancies (caused by some electors having, you know, integrity).

One more interesting thing. Look at the first page (page 7 of the pdf). Notice the asterisks. Count the “petals”. There are five. That’s just like the Baskerville Old Face that Microsoft ships with Office and some versions of Windows. Now, look at Wisconsin’s page (page 45). There are six “petals” on the asterisks. Looks like the same font. Except what’s up with the different asterisks? Looks very much like Microsoft Word performing a font substitution. Maybe Wisconsin used the Mac version of Word. Or OpenOffice. Or Google Docs.

Now, here’s how to prove my suppositions. If you have subpoena power or a team of people to do some investigating, start tracking down the people who signed these documents. Ask them for the Word document (or other digital template) that was sent to them. Ask them who sent them and what instructions did they give them.