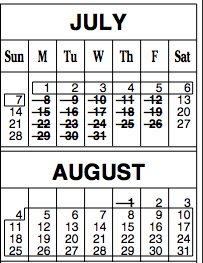 I wanted to make some observations about the chronology included in the CIA IG Report–Appendix B of the report. These are mostly just observations, so I apologize if this post is incoherent.

First, notice that the chronology has three columns, only one of which (Events at Washington) is labeled. The other two columns appear to be organized in parallel structure to the report itself, with the High Value Detainee program–which corresponds with pages 33 though 45 in the report–in the third column, and a program that appears to be in Afghanistan and Pakistan–which corresponds with pages 46 through 77 [note–someone smart already pointed out this structure WRT the report itself–apologies for forgetting who it was]–in the center column.

The most interesting detail of the three-column structure is that it shows the capture of Khalid Sheikh Mohammed in the center column, whereas the capture of Abu Zubaydah is in the third column, suggesting a different administrative entity captured KSM than captured AZ (though KSM was transferred into that other entity immediately after being captured).

So let’s look at the first column. The first redaction probably pertains to the Finding authorizing the program in general–I’ll come back to treatment of this after that Finding is released on Monday. It also describes CIA OGC "beginning research" on interrogation issues as early as September 2001. That suggests legal research (and no doubt refers to work done in cooperation with John Yoo and David Addington), but I wonder if OGC also started the technical research–which would put that genesis of the torture program (unsurprisingly) much earlier than the December 2001 date currently claimed.

The rest of the column–at least the unredacted bits–include four different kinds of information:

Of those, one very interesting detail (in addition to the redacted event in December 2002) is the repeated focus on OMS (Office of Medical Services) guidelines, which demonstrates the degree to which they used medical personnel to make this look legit. Note that the CIA doesn’t include the "Legal Principles" document in there, even though it considered that a key authorization–or so it says.