“I Want to Thank My Two Closeted GOP Colleagues” 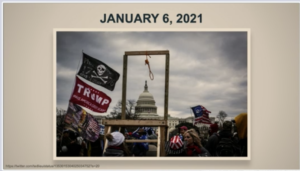 I listened to some of the series of speeches given by House members today, recalling their personal experiences of last year’s insurrection. I would catch a couple speeches, then make a pastoral visit, then hear a few more on my way to a meeting, then a couple more after the meeting was done. Even so, I was struck by how different these speeches were, compared with what usually is said by members of Congress.

The first difference that hit me was the use of first names. There was almost none of the usual congressional stylings of “the gentleman from . . .” or even “Representative so-and-so” but instead it was “Jason” and “Lisa” and “Pete.”

The second difference was the presence of language referring to the “Capitol Hill family.” It is rare that congressional staffers, food service people, janitors, and Capitol Hill police are recognized on the floor, but yesterday they were not only recognized but called out and praised by name as well. So too were media members who were there that day, who we celebrated for trying to do their jobs — reporting the story out on their laptops or taking photos and video with their cameras — in the midst of the insurrection. I expected to hear about the various police officers who died or were injured, but the thanks given to all these non-elected people was surprising, heartfelt, and stunning.

But the third thing that hit me came when Adam Schiff offered his remarks. He began by saying he had been focused on preparing to engage the arguments put forward by those objecting to the results coming out of six different states, and not on what was happening outside. Then he said this:

It was not until our leadership was swiftly removed from the chamber and police announced that we needed to take out our gas masks that I understood the full extent of the danger. When the order came to evacuate, I stayed behind for a while, until two Republicans came up to me. One of them said “You can’t let them see you. I know these people. I can talk to these people. I can talk my way through these people. You are in a whole different category.”

Notice what’s missing? The names. In this midst of all the thanks that all the speakers were extending to everyone, Schiff did *not* mention who those two Republican colleagues were, who were so concerned about his safety. This wasn’t a snub – far from it. This was Schiff declining not to out them as compassionate to a Democrat, even while he held up their behavior as laudable.

There is a strong — and I mean STRONG — culture in Congress of respecting things said in confidence between members from different parties. They recognize that they need to be able to speak frankly with each other if they want to get anywhere, and that only happens when both people can trust that their conversation will remain between the two of them until they are ready to reveal it. Break that rule, and no one will speak across the aisle with you again.

I have to wonder, though, how long such treatment will last in the current climate.

Beginning in the 1980s, gay activists outed a number of conservative politicians for their hypocrisy – cruising the gay bars at night, and then the next day voting against AIDS funding or LGBT rights or otherwise obstructing anything that might be seen as helping the LGBT community. These outings were by no means universally accepted within the activist community, as “working from within” had a place, as did the respect for being able to come out on your own terms. There was also a fear that outing people would backfire and only add to the public stigma of being LGBT. The reply by those doing the outing was “if this is what working from within gets us, we can do without it.”

Congressional Moderates in today’s GOP are living in deeper political closets than gays in the 70s or even communists in the 50s. “If anyone learns that I speak nicely with the Democrat who led Trump’s first impeachment trial, let alone warned him to flee from the mob, I’m toast.” Those closeted GOP members of Congress who warned Schiff about his personal danger may want to thank him for returning the favor this afternoon, by not putting them in danger by naming them publicly in his remarks today.

You can be sure that Trump and his followers are probably beating the bushes, trying to figure out who those two treasonous Republicans are, to drag them out of the closet and wreak their vengeance upon them. Perhaps these two ought to think about how to come out on their own terms, before angry Republicans do it for them.