In a press conference, Rick Snyder just urged the MI legislature to pass a right to work bill (after having said it was not appropriate for MI in the past).

There were a number of funny aspects about the press conference, particularly the way Snyder and House Speaker Jase Bolger and Senate Majority Leader Randy Richardville dodged repeated questions about whether Dick DeVos’ funding had some influence on this decision (they answered by pointing to all the conversations they had with UAW President Bob King, avoiding the funding question entirely). Given all that dodging, I think it safe to assume that Dick DeVos just bought the right to force down wages $1,500 for every worker in this state (as right to work legislation has been shown to do in other states).

All that said, there’s nothing funny about this move generally. Republicans are adding an appropriation to the bill to make it impossible to overturn via referendum (all while preaching choice and freedom!). They mean to take that money out of MI workers’ pockets and they’re going to do it undemocratically to ensure the do so. 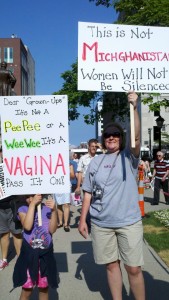