As noted in the last thread, more than twelve hours later on the same day that federal agents conducted a search on Jeffrey Clark’s home in Virginia, FBI agents seized John Eastman’s phone as he was leaving a restaurant in Santa Fe. He has launched a bozo lawsuit attempting to get the phone back. And as part of that, he released the warrant used to seize his phone.

Orin Kerr has a long thread treating the bozo lawsuit seriously here — noting among other things that Constitutional law professor John Eastman forgot he was in New Mexico and therefore in the Tenth Circuit, not the Ninth. File411 has a post treating it like the bozo suit it is here.

But I’m interested in the warrant itself. As many people have noted (including Eastman himself), the warrant is from DOJ IG’s Cyber Division, not DC USAO. CNN has a helpful explanation for that: at least on the Eastman search, DOJ IG is engaged in fairly unusual coordination with the USAO (which explains all the squirreliness about which Federal agents had searched Clark’s home).

Federal agents from the Justice Department’s Office of Inspector General, which is coordinating with the wider FBI and US attorney investigation into January 6, 2021, last week raided the home of former DOJ official Jeffrey Clark, a source familiar previously told CNN. That search — during which the Justice Department inspector general’s participation had not been previously reported — came the same day as Eastman’s.

That makes a reference in the search warrant more interesting. This is just a seizure warrant, not a warrant authorizing the search of the phone. And it states that agents will bring the phone either the DOJ IG forensic lab in Northern Virginia or to some unidentified location in DC; it doesn’t mention the FBI’s Quantico facility, though that is also in NoVA and even experts on DOJ IG aren’t aware of any dedicated forensic lab DOJ IG has.

This warrant would be consistent with use in parallel investigations, the DC (or Main) investigation into Trump and Eastman as well as a DOJ IG investigation into January 6 that Michael Horowitz announced in early 2021. I’ve been wondering whether DOJ IG’s investigation(s), which can be quite slow, have delayed the review of DOJ’s conduct. This may be the solution: coordinated investigations. In his January 2021 announcement, Horowitz addressed that concern.

The DOJ OIG is mindful of the sensitive nature of the ongoing criminal investigations and prosecutions related to the events of January 6. Consistent with long-standing OIG practice, in conducting this review, the DOJ OIG will take care to ensure that the review does not interfere with these investigations or prosecutions.

In other words, this seizure may actually reflect at least two underlying search warrants, and as such may be an attempt to obscure (like the original Rudy Giuliani warrants would have) the focus of the underlying January 6 investigation. That is, DOJ IG could hand Eastman a warrant for an investigation into Jeffrey Clark, and that would be sufficient to answer his demands for a warrant, even if there were a more substantive warrant for the DCUSAO investigation.

That’s why the timing is of interest. As File411 notes, it was authorized on June 17, so after the Big Lie January 6 Committee hearing, but five days before it was executed on June 22. If this warrant was a response to the January 6 Committee hearings, it wasn’t a response to the hearing focused on Jeffrey Clark, but rather on one focused on Eastman.

In the days ahead, you will hear wailing about how poor Constitutional attorney John Eastman had his privacy abridged — that’s the point of the bozo lawsuit, just like Russian oligarchs do. But the very same people who’ll be whining were huge fans of DOJ IG’s best known cyber work — a 2018 report explaining why the FBI’s text archiving system hadn’t captured 19,000 texts between Peter Strzok and Lisa Page. 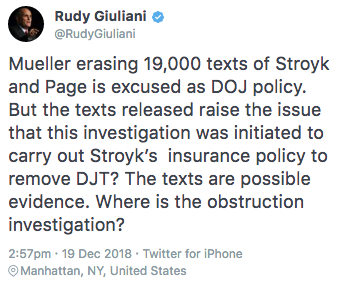 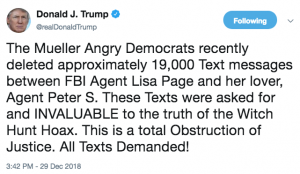 That investigation, like this one, appears to be focused on a DOJ employee who has already resigned (though the earlier report was started when Strzok and Page were still at FBI). And given the seizure of devices, it may be focused on inappropriate politicization of DOJ — the allegation at the core of investigations into Strzok and Page, yet for which DOJ IG never substantiated proof.

Both Rudy and Trump are on the record supporting such DOJ IG investigations into phones for evidence of improper politicization. Chances are they’re going to be less enthusiastic now that the subjects of the investigation are John Eastman and Jeffrey Clark.