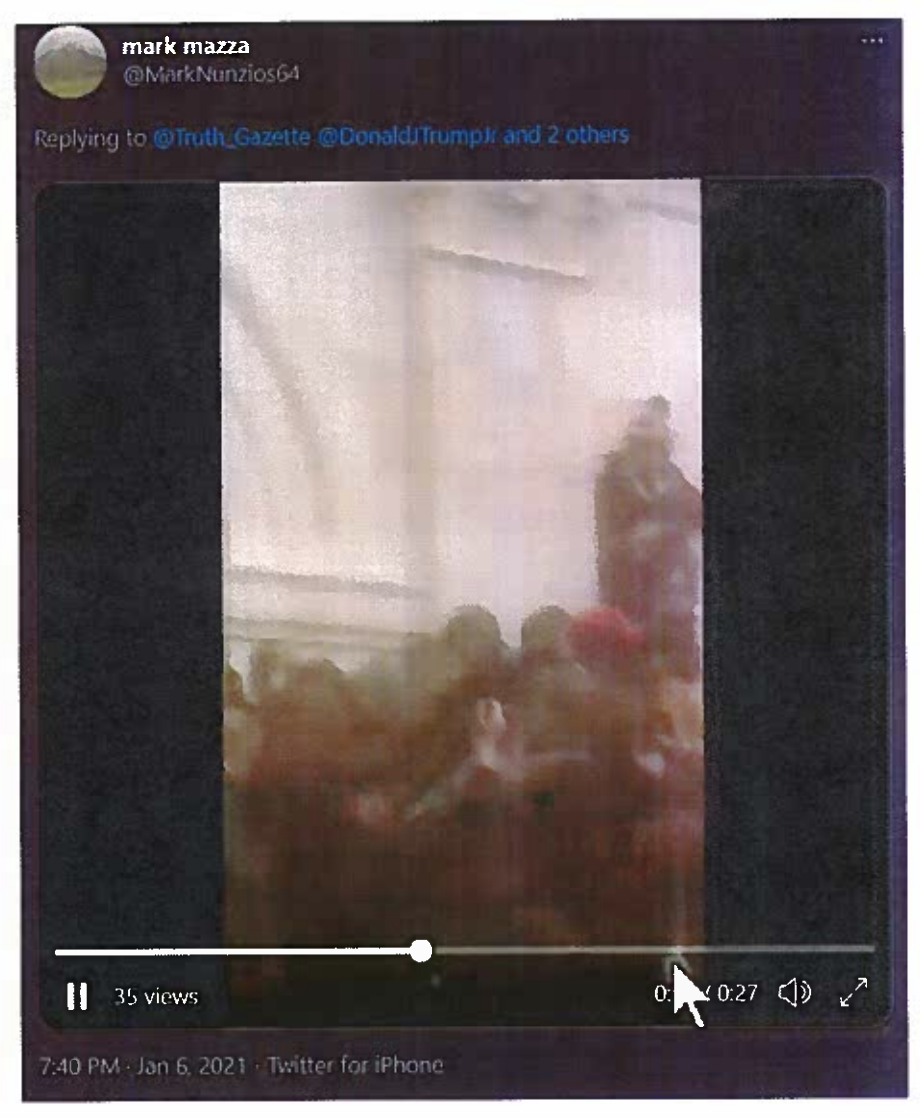 The pace of the January 6 arrests finally slowed considerably, presumably as DOJ finishes working through the arrests of trespassers whose phone they need for evidence against more serious defendants.

But two recent arrests, those of Jeremy Baouche and Mark Mazza, show that DOJ is also only getting around to suspects of more interest, but about whom the investigation faced early hiccups.

The FBI first got Jeremy Baouche’s name when several people falsely IDed him in this BOLO poster in mid-January, as well as a tip that may or may not have been a response to the poster that revealed that he worked at General Dynamics Electric Boat. Apparently based off those tips, the FBI attempted to interview him on January 20, but once he heard the FBI agents want to talk about January 6, he (wisely) refused to say anything without an attorney.

But as a result of those investigative steps into multiple tips misidentifying Baouche, the government got information from Baouche’s employer — through whom he has a Secret security clearance — showing him conducting alarming searches on his work computer in the weeks leading up to the riot.

On January 22, 2021,JEREMY K BAOUCHE’s employer, Electric Boat (a Department of Defense Contractor), voluntarily provided TFO Carter with an internet search history from BAOUCHE’s work computer from December 1, 2020, until January 20, 2021. They also provided the security banner that all employees see when they use a computer at Electric Boat that states it is subject to search by the employer. In BAOUCHE’s search history there were searches on topics including the inauguration, the U.S. Capitol building layout, guns, rifle scopes, lasers, Trump protests, FBI Capitol, and searches for jobs in the western U.S. It should be noted that BAOUCHE has a secret security clearance as part of his employment.

The affidavit doesn’t say whether the inquiries by the FBI led Electric Boat to look more closely and offer this up or whether the FBI asked for it.

At some point, the FBI obtained the Google GeoFence location for Baouche, showing his movements outside and then inside the building. 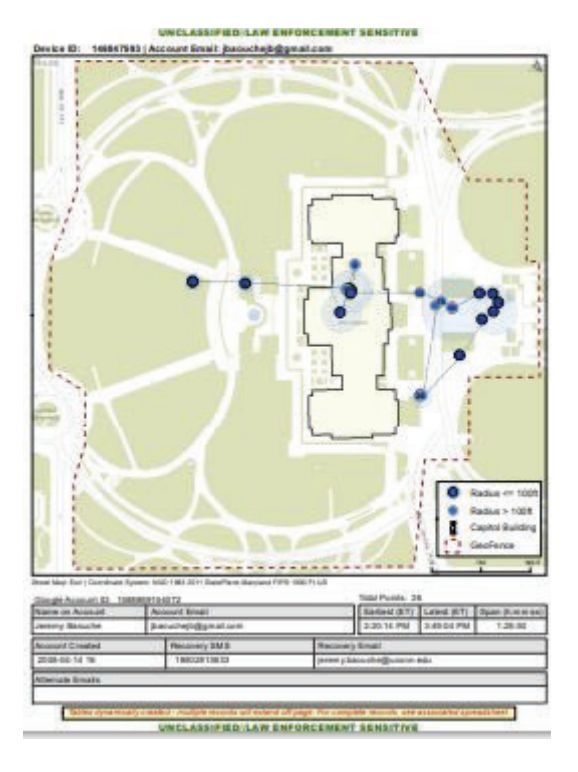 That alerted the FBI which videos to check, and from that, they found a picture of Baouche inside the Capitol that matched what he was wearing in a picture — they include this without explanation — “in a social media post standing with Roger Stone on January 5, 2021.”

On March 1, Grayson Sherrill, was arrested (he was identified by his family members). He was one of the guys shown in the BOLO mistakenly identified as Baouche. On March 16, Elliot Bishai, the guy confused with Baouche, was arrested. But by that point, the FBI had already confirmed that Baouche had also attended the riot, and so, after what started as misidentifications, he would end up being arrested himself.

On April 30, one of Baouche’s co-workers not only identified him from a surveillance video still showing him, but also described that he always cuffs his pants. One of the FBI agents who had tried to interview Baouche had noted that his pants were cuffed. The same witness described that Baouche had lied about why he took off from work on January 5 and 6, claiming he was going fishing with his grandfather in January.

W-2 then said he recalled BAOUCHE taking off January 5, 2021 and January 6, 2021. W-2 said that BAOUCHE told him he was going fishing with his grandfather. W-2 said he thought this was strange to go fishing with a grandfather in January, but then thought maybe it was ice fishing.

In August, FBI obtained the full report from the warrant on Baouche’s Google account. The arrest affidavit describes evidence corroborating that Baouche traveled to DC.

On approximately August 4, 2021, TFO Banwell completed a review of the Cellbrite report from the BAOUCHE Google search warrant which was submitted in this investigation. TFO Banwell reviewed the material provided from Google from November 2020 until June 2021.

Information obtained through Google on BAOUCHE’S account includes videos that appear to be taken from his phone from inside and outside of the U.S. Capitol on January 6, 2021, and photos of him with location data in Washington, D.C. on January 5, 2021. Also found was an email confirmation of a motel reservation in the name of JEREMY BAOUCHE for the Red Roof Inn Plus, in Washington, D.C. with check in on January 5, 2021 and check out on January 6, 2021. Furthert [sic] investigation revealed that BAOUCHE purchased a Pro-megaphone rechargeable battery and Pyle megaphone 50-watt siren bullhorn speaker with detachable microphone and lightweight strap sometime between November 22, 2020 and December 26, 2020,. The description matches the bullhorn BAOUCHE was seen carrying inside the Capitol.

But the arrest affidavit doesn’t explain whether Baouche conducted similarly alarming searches from his own computer.

It’s unclear whether there’s more to Baouche’s searches, his bullhorn purchase by Christmas, the two people who accompanied him to the riot, or his picture with Roger Stone. But what started as a mistake turned ultimately led to his arrest.

The FBI first identified Mazza on January 28 after the ATF alerted them that a gun that had been seized when it fell out of the waistband of a person who was fighting with cops on January 6 had been reported stolen by Mazza.

Mazza had claimed that the gun was stolen from a rental car in the parking lot of the Hard Rock Casino in Cincinnati sometime on January 6, after which, Mazza falsely told local cops, he returned to his home Indiana. But a location warrant obtained on Mazza’s phone in February showed that he had in fact driven through Ohio to DC for the riot. And a public review of Mazza’s Twitter account showed that he had replied to Don Jr and others linking a video from the riot. 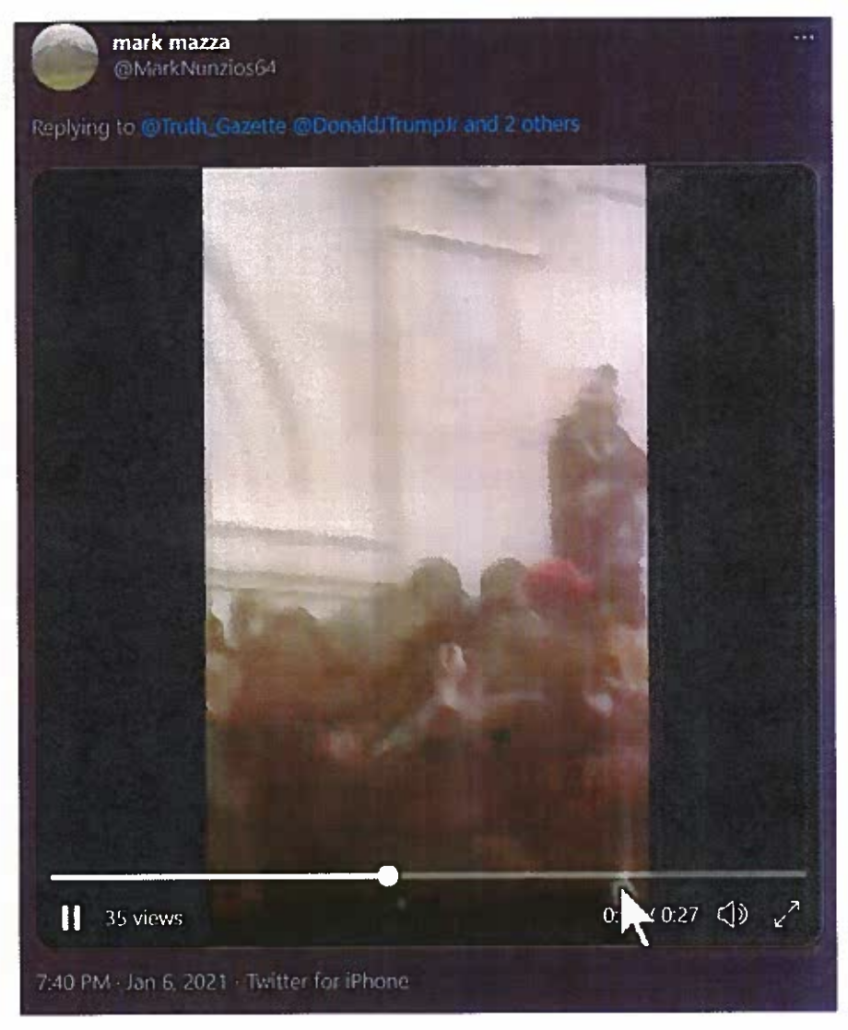 A search warrant served on Twitter (the arrest affidavit doesn’t reveal its date) yielded selfies from the riot, as well.

On March 25, the FBI interviewed Mazza on his front porch in Shelbyville, IN. He admitted he had been at the riot and provided some details loosely resembling what video analysis would later show. But he claimed he had lost the gun while in the Lower West Tunnel, where video evidence placed him after the gun had already seized by the cop. And he denied assaulting any cop, even though video evidence showed someone believed to be him fighting with cops, armed with a baton. He also suggested that had he seen Nancy Pelosi that day he might have done something that would have gotten him arrested a lot quicker.

MAZZA was asked “Is there anything you told us that you want to change or add to?” MAZZA replied “It was cold as hell that day, that whole three days. … never did get to talk to Nancy … I thought Nan and I would hit it off.” And “I was glad I didn’t because you’d be here for another reason and I told my kids that if they show up, I’m surrendering, nope, they can have me, because I may go down as a hero.” MAZZA further stated that, “If you do have to come back and take me, put me in a fed. … I just want three squares and a nice clean room, someone takes care of my health care and I’m good.”

The arrest affidavit makes clear that when Mazza first entered the Tunnel on January 6, he wore a scarf that obscured his face.

And the affidavit suggests that he later used his baton to protect Michael Fanone and another officer after they got dragged into the crowd.

But it still took almost eight months after that interview before the FBI arrested Mazza, and as the affidavit notes, they’re still not sure whether he was the guy who was fighting with a cop when the gun fell out of the waistband.

It’s an example of something I’ve written about before: one reason so many Jan 6ers are being prosecuted for assault is because there’s video evidence. But in the case of the person who was fighting with a cop when Mazza’s gun dropped from that person’s waistband, there appears to be no official video, and the cop in questioned IDed someone else as his assailant. So thus far, at least, Mazza wasn’t charged for that assault.