Ron Wyden: Obtaining ECTRs without a Warrant Is Almost Like Spying on Someone’s Thoughts 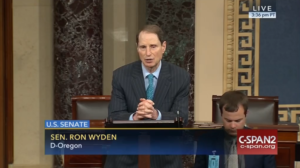