Over the weekend, Judicial Watch’s head of investigations Chris Farrell went on Lou Dobbs and referred to the group of migrants Trump has dubbed a “caravan” as a,

highly organized, very sophisticated organization — I have that from the highest levels of the Guatemalan government — they’re investigating those groups criminally, and I strongly urge President Trump and his Attorney General Jeff Sessions to do the same here, a lot of these folks also have affiliates who are getting money from the Soros-occupied State Department, and that is a very grave concern.

When people noted that Farrell had been spewing the same kind of Protocols of the Elders of Zion conspiracy that Robert Bowers had embraced before shooting up the Tree of Life Synagogue in Pittsburgh and that such conspiracy theorizing had led Cesar Sayoc to send a bomb to Soros, Fox took down the segment (but not before showing it twice) and claimed it would no longer welcome Farrell.

Radio Televisión Martí, a network overseen by the U.S. government that broadcasts to Cuba, pulled a video segment it produced months ago that relied on material from the conservative group Judicial Watch and referred to Democratic donor George Soros as a “multimillionaire Jew,” Mother Jones reported last week.

“George Soros has his eye on Latin America. But Judicial Watch, an American investigative legal group, also has its eye on Soros and what it sees as his lethal influence to destroy democracies,” the narrator of the segment says in the video, according to an English translation published by Mother Jones. “It describes him as a millionaire investor and stock market speculator who exploits capitalism and Wall Street to finance anti-system movements that fill his pockets.”

The video also refers to Soros as “the multimillionaire Jew of Hungarian origin whose fortune is estimated at $8 billion” and “a non-believing Jew of flexible morals,” according to Mother Jones.

While the assassination attempt has generated focus on Judicial Watch’s actions, what has not been explained, is how Judicial Watch came to include Soros on its beat, which otherwise for the last several years has remained focused on the themes of the 2016 election (and for basically the history of the organization has been focused unrelentingly on Hillary Clinton). They’re still looking for Hillary emails, and other than a break to push the Brett Kavanaugh confirmation, currently spend most of their time trying to discredit the Mueller investigation. They’re even still trying to use Tony Podesta’s involvement in Paul Manafort’s corruption to suggest John Podesta had a role in such things.

The organization is awful, but they’re not primarily awful in an unreconstructed racist sense.

There are some thematic sympathies, to be sure. JW has supported Trump’s Muslim ban. They’ve done some lawsuits on where refugees were resettled under the Obama Administration. JW sued for information on unaccompanied minors in custody under the Obama Administration, claiming they had ties to gangs and other crimes. Even before Farrell’s “caravan” comments, he and JW President Tom Fitton were calling to militarize the border.

Just as notably, the premise behind Farrell’s coverage of this issue and presence on Lou Dobbs’ show over the weekend (though he has been a very regular guest on Dobbs’ show) — that he recently took a fact-finding trip to investigate the “caravan” — is also a departure from Judicial Watch’s normal investigative approach, which involves endless FOIAs rather than reporting trips.

JW is pitching its coverage of the “caravan” as part of its “corruption chronicles” which are normally focused on the US government, perhaps based on its claim that there is financial support for migrants in Central America.

Here’s one of the reports from his trip — which seems more like an effort to air right wing governments’ propaganda about migrants than any evidence of corruption.

The migrant caravan marching northbound through Central America is an “elaborately planned” movement that’s benefiting human smugglers and bringing disturbing numbers of violent gang members and other criminal elements through Guatemala, according to government sources in the capital city. “MS-13 gang members have been detained and coyotes (human smugglers) are joining the march with clients who pay to get smuggled into the United States,” a Guatemalan official told Judicial Watch. People from Asian countries waiting to get smuggled into the U.S. through Central America are also integrating with poor Hondurans in the caravan, a high-level Guatemalan government source confirmed. Among them are nationals of Bangladesh, a south Asian Islamic country that’s well known as a recruiting ground for terrorist groups such as ISIS and Al-Qaeda Indian Subcontinent (AQIS). “There are lots of dirty businesses associated with this,” Guatemalan authorities told Judicial Watch. “There’s lots of human trafficking.”

Sandwiched between Honduras and Mexico, Guatemala has been overrun with the onslaught of migrants that began their journey last week in the northern Honduran city of San Pedro Sula. At last count around 7,000 have participated in the trek, a great deal of them rowdy, angry men ages 17 to 40. President Jimmy Morales has ordered the military and police to detain all of the migrants and facilitate their safe return back to Honduras, though thousands have already reached the Mexican border. In a morning interview with Judicial Watch at the Guatemalan Ministry of Defense, Secretary of Defense General Luis Miguel Ralda Moreno said more than 2,000 Hondurans have been sent back home on buses. “We’re doing everything possible to stop the caravan while still respecting human rights,” General Moreno said.

During an afternoon interview at the National Palace, President Morales said that Guatemala has absorbed the huge cost of mobilizing police and military to return thousands of people to Honduras. He would like the United States to help him find the organizers of the caravan so they can face legal consequences. “Mass immigration like this endangers lives,” Morales said. “This is unprecedented. We are in the process of investigating who is behind the caravan.” Morales assures that Guatemala is doing everything possible to curb illegal immigration and asked for cooperation from the United States.

But as it turns out, and as the Radio Televisión Martí piece makes clear,  JW’s attacks on Soros go back further, at least 18 months.

The effort publicly started in February 2017, as tensions between the right wing government and the opposition in Macedonia started heating up. At that point, JW accused Soros of engaging in a “clandestine” effort to overthrow the government, one based on a Viktor Orbán accusation (remember that Orbán is about to shut down Soros’ Central European University, an effort launched around the same time as this JW effort).

Here’s how the clandestine operation functions, according to high-level sources in Macedonia and the U.S. that have provided Judicial Watch with records as part of an ongoing investigation. The Open Society Foundation has established and funded dozens of leftwing, nongovernmental organizations (NGOs) in Macedonia to overthrow the conservative government. One Macedonian government official interviewed by Judicial Watch in Washington D.C. recently, calls it the “Soros infantry.” The groups organize youth movements, create influential media outlets and organize violent protests to undermine the institutions and policies implemented by the government. One of the Soros’ groups funded the translation and publication of Saul Alinsky’s “Rules for Radicals” into Macedonian. The book is a tactical manual of subversion, provides direct advice for radical street protests and proclaims Lucifer to be the first radical. Thanks to Obama’s ambassador, who has not been replaced by President Trump, Uncle Sam keeps the money flowing so the groups can continue operating and recruiting, sources in Macedonia and the U.S. confirm.

With a population of about 2 million, Macedonia has one of the more conservative governments in Europe. This includes the lowest flat tax in Europe, close ties with Israel and pro-life policies. The country recently built a border fence to crackdown on an illegal immigration crisis that overwhelmed law enforcement agencies. Between 10,000 and 12,000 illegal aliens were crossing the Greek-Macedonian border daily at the peak of the European migration crisis, a Macedonian official told Judicial Watch, and the impact was devastating. This is likely of big interest to Soros, a renowned open borders advocate who pushes international governance, diminished U.S. global power and an increase in Muslim immigration. Soros spent tens of millions of dollars to support Hillary Clinton’s presidential campaign. Just this month Hungary’s prime minister lashed out against Soros for funding groups to secretly influence the country’s politics. “Large-bodied predators are swimming here in the waters,” said Viktor Orban in his annual state of the nation speech. “This is the trans-border empire of George Soros, with tons of money and international heavy artillery.”

JW started suing for State documents on Soros’ involvement in Macedonia in April 2017. In May of that year, Mike Lee and five other GOP Senators started probing why State fosters democracy. This year, JW has sued for information on State-funded Soros programs in Romania, Colombia and Albania. The Radio Televisión Martí piece makes it clear they’re focusing on Cuba, too.

Perhaps most interesting, however, is a May 21 piece Farrell did on Lou Dobbs, (this came in the wake of the Concord Management filing complaining about the same, but I’m still working on pulling up the full episode to see if that’s what it was a reference to) in which he claimed that President Obama pursued a policy of regime change overseas, at times funded by Soros, which Dobbs suggested may have prompted Putin’s own tampering. 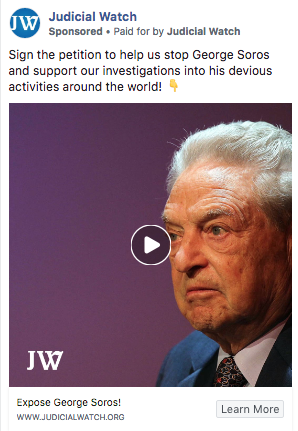 That is, not only are JW and Dobbs complaining that Soros is undermining right wing governments, but at least once, they made the argument that Soros’ open society work justified Putin’s own tampering in 2016.

Update: This InfoWars piece pointing to JW’s Albanian documents to sustain a claim that JW has proven the caravan is funded by Soros relies on both JW’s FOIAed documents and documents leaked by dcleaks in 2016. While I’m definitely not suggesting a link, by using both JW FOIAed documents and GRU stolen ones, InfoWars ties Putin’s 2016 effort to JW’s current ones.

Update: This post says the conspiracy theory linking Soros to the caravan dates to March.

The claims of a direct link between intentional SºRºS funding and the Latin/Central America ⊂⟑r⟑v⟑n appeared on March 30th. Of course, this was a different caravan. But it is the origin of the larger theme and keywords. It was amplified in April and May by TheBl⟑ze, WND, along with the usual actors, rage blogs, and sketchy K.⟑.G. cyborg accounts. And by MSN headlines, fact checks, and aggressive left-wing “retort” sites.

Let’s begin from the start. To be clear, I don’t mean all the SºRºS-funding rumors, but specifically the damaging Latin America-related ⊂⟑r⟑v⟑n-funding, midterm election impacting one.

Update: The employees behind the Radio Televisión Martí ads have been suspended and may get fired.

The federal government’s state-funded broadcasting arm is placing a number of employees on administrative leave and opening an investigation into how it ended up airing a story this year attacking liberal financier George Soros as a malignant “multimillionaire Jew.”

The story aired in May on Radio Televisión Martí, a Spanish-language broadcaster housed in the Office of Cuba Broadcasting in Miami. OCB is a division of the United States Agency for Global Media (USAGM), formerly known as the Broadcasting Board of Governors, an independent federal agency that oversees government-funded news organizations around the world.

“Those deemed responsible for this production will be immediately placed on administrative leave pending an investigation into their apparent misconduct,” Lansing added. “Disciplinary action appropriate under federal law may then be proposed, including the potential removal of those responsible, depending on the outcome of that investigation.”