In the Oath Keepers case, the government just sent out a letter raising concerns about DC’s Rule 1.8(e) that governs the ethical obligations in cases where a third party pays for someone else’s defense. That’s allowed, but there are three necessary conditions: that the defendant make informed consent, that the payor not interfere in case decisions, and that information about the case may not be shared with the payor.

(2) There is no interference with the lawyer’s independence of professional judgment or with the client-lawyer relationship; and

(3) Information relating to representation of a client is protected as required by Rule 1.6.

At issue is the scheme that BuzzFeed revealed and Mother Jones later reported that describes that Sidney Powell is paying for some of the Oath Keepers’ defense.

As the government describes, in response to the government’s queries, lawyers for Stewart Rhodes and Jessica Watkins did not respond, the Meggs’ lawyers and that of Kenneth Harrelson say they’re in compliance with the rule, and William Shipley, who is representing Roberto Minuta, said he’d respond to Judge Mehta’s inquiries, but didn’t answer to DOJ.

1. Attorney David Fischer, who represents Thomas Caldwell, stated that he was in compliance with Rule 1.8(e) and that he “has received no funding from, and has no affiliation with, Defending the Republic.”

2. Attorney Scott Weinberg, who represents David Moerschel, stated he was in compliance with Rule 1.8(e) and that he was not receiving any funding from Defending the Republic.

3. Attorney Gene Rossi, on behalf of himself and co-counsel Natalie Napierala and Charles Greene, who represent William Isaacs, stated that they were in compliance with Rule 1.8(e) and that they were not receiving any funding from Defending the Republic.

4. Attorney Tommy Spina, on behalf of himself and co-counsel Edward B. MacMahon, Jr., who represent Jonathan Walden, stated that they were in compliance with Rule 1.8(e) and that they were not receiving any funding from Defending the Republic.

5. Attorneys Julia Haller and Stanley Woodward, who together represent Kelly Meggs and Connie Meggs, stated that they were in compliance with Rule 1.8(e). They did not specifically inform the government whether their fees were being paid by Defending the Republic.

6. Attorney William Shipley, who represents Roberto Minuta, declined to answer, but wrote, “Should Judge Mehta wish for my client or me to explain the arrangement for funding my client’s legal defense in order to confirm that my client’s Sixth Amendment right to conflict-free counsel are being afforded – or waived – we will provide him with whatever information he requests.”

7. Attorney Bradford Geyer, who represents Kenneth Harrelson, stated that he was in compliance with Rule 1.8(e). He declined to inform the government whether his fees were being paid by Defending the Republic.

The other defense counsel whom the government believes to be retained rather than court-appointed – Phillip Linder and James Lee Bright for Stewart Rhodes, and Jonathan Crisp for Jessica Watkins – have not yet responded to the government’s letter.

The letter DOJ sent to the defense attorneys suggested that Powell’s interests may diverge from these defendants.

The Supreme Court has said that “inherent dangers . . . arise when a criminal defendant is represented by a lawyer hired and paid by a third party.” Wood v. Georgia, 450 U.S. 261, 269 (1981). In Wood, the third-party payer was the “operator of the alleged criminal enterprise,” and thus the lawyer had an interest in the clients not testifying against the third-party payer or taking other actions contrary to the payer’s interest.4 Id. Indeed, comment 10 to Rule 1.8 explains that “third-party payers frequently have interests that differ from those of the client.” Here, Defending the Republic may have interests that diverge from these defendants.

4 As Defendant Kelly Meggs’s former counsel Jonathon Moseley told Mother Jones, Defending the Republic’s “financial support has the effect of making plea bargains less likely.” This fact could be against the interest of a particular defendant.

I’m happy DOJ is addressing this. The lawyers who are reported to be on Powell’s dole seem to be pushing conspiracy theories in lieu of a real defense.

What I don’t understand is the timing. BuzzFeed first reported this on March 9. DOJ only sent out its inquiry letter on June 16, over three months later.

And thus far, DOJ is only raising this in the Oath Keepers’ case. At the very least, you’d think DOJ would make similar inquiries in the Ryan Samsel case; he’s represented by the same team, Stanley Woodward and Juli Haller, as is representing the Meggses. And after he was assaulted, Samsel seemed to decide not to cooperate (against what would be Joe Biggs).

Similarly, William Shipley is representing a slew of defendants, including many of the Proud Boys who might most immediately implicate Biggs.

Finally, Jimmy Haffner, one of the Proud Boys accused of helping to open up the East Door of the Capitol, posed with Powell when her fundraising bus came through town in 2020. 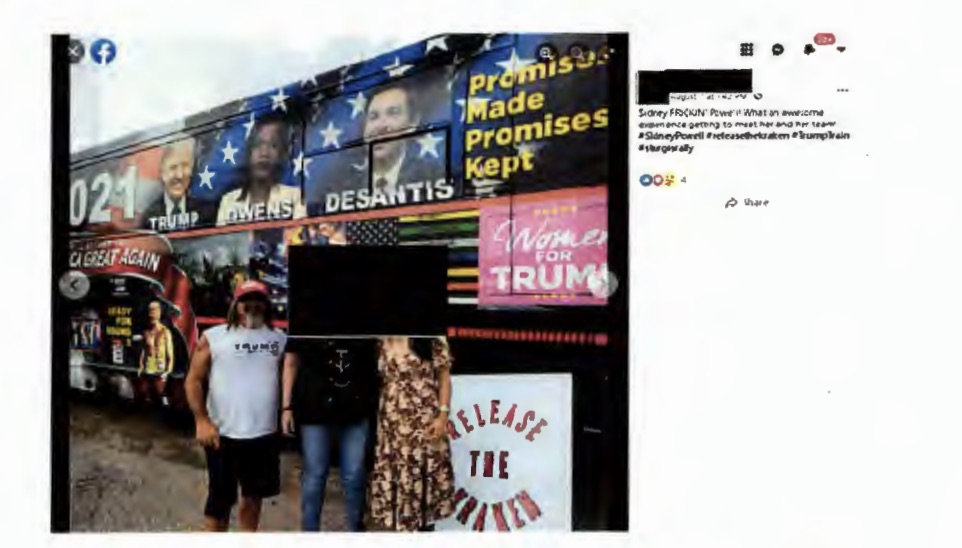 Of course, DOJ has been investigating Powell herself since at least September, so maybe they’re learning of new conflicts only now.

So who else is Sidney Powell paying? And why is DOJ only doing something about it now?