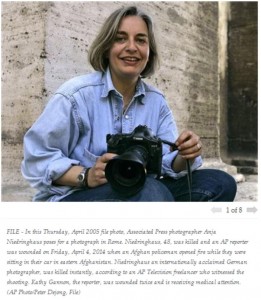 This photo of Niedringhaus accompanies the AP story on her death.

Yesterday, in noting the large deployment of Afghan security personnel for Saturday’s presidential election, I wondered in an aside how well these troops had been screened, since a large contingent of them were described in the Afghan press as “fresh”. Sadly, a police unit commander in the Tanai District on the outskirts of Khost turned his gun on a vehicle occupied by AP photographer Anje Niedringhaus and AP reporter Kathy Gannon. Niedringhaus was killed and Gannon is being treated for at least two bullet wounds but is said to be in stable condition. Early reports suggest that the police officer who opened fire was not a recent recruit and was taken into custody when he surrendered immediately after the incident.

Niedringhaus covered conflict zones including Kuwait, Iraq, Libya, Gaza and the West Bank during a 20-year stretch, beginning with the Balkans in the 1990s. She had traveled to Afghanistan numerous times since the 2001 U.S.-led invasion.

Niedringhaus, who also covers sports events around the globe, has received numerous awards for her works.

She was part of an AP team that won the 2005 Pulitzer Prize in breaking news photography for coverage of the war in Iraq, and was awarded the Courage in Journalism Award from the International Women’s Media Foundation. She joined the AP in 2002 and had since been based in Geneva, Switzerland. From 2006 to 2007, she was awarded a Nieman Fellowship in journalism at Harvard University.

Niedringhaus started her career as a freelance photographer for a local newspaper in her hometown in Hoexter, Germany at the age of 16. She worked for the European Press Photo Agency before joining the AP in 2002, based in Geneva. She had published two books.

Gannon, 60, is a Canadian journalist based in Islamabad who has covered Afghanistan and Pakistan for the AP since mid-1980s.

She is a former Edward R. Murrow Fellow at the Council on Foreign Relations in New York and the author of a book on the country, “I Is for Infidel: From Holy War to Holy Terror: 18 Years Inside Afghanistan.”

The New York Times has one of the more complete descriptions of the attack that I have seen:

Ms. Niedringhaus and Ms. Gannon had spent Thursday night at the compound of the provincial governor in Khost, and had left on Friday morning with a convoy of election workers delivering ballots to an outlying area in the Tanai district, The A.P. and Afghan officials said.

The convoy was protected by the Afghan police, soldiers and operatives from the National Directorate of Security, Afghanistan’s main intelligence agency, said Mubarez Zadran, a spokesman for the provincial government. Ms. Niedringhaus and Ms. Gannon were in their own car, traveling with a driver and an Afghan freelance journalist who was working with the news agency.

After the convoy arrived at the government compound in Tanai, Ms. Niedringhaus and Ms. Gannon were waiting in the back seat for the convoy to start moving again when a police commander approached the car and looked through its windows. He apparently stepped away momentarily before wheeling around and shouting “Allahu akbar!” — God is great — and opening fire with an AK-47, witnesses and The A.P. said. His shots were all directed at the back seat.

The police commander, identified by the authorities as Naqibullah, 50, then surrendered to other officers and was arrested. Witnesses said he was assigned to the force guarding the government compound and was not one of the officers traveling with the election convoy.

I have written extensively on the issue of green on blue killings, where Afghan forces attack US forces. It would appear that this is the first instance, though, of Afghan security personnel turning fire on Western members of the press. The Times addresses the insider killing aspect in relation to previous events:

Afghan and Western officials say they believe that most of the so-called insider attacks have been driven by personal animosity or anger about the war in Afghanistan, where many have come to view foreign forces as occupiers. The authorities declined to speculate on what motivated the shooting Friday and there was no immediate claim of responsibility from the Taliban, who boast of having infiltrators in the Afghan security forces and often take credit when soldiers or the police turn on foreigners.

Sadly, this incident joins a number of recent attacks on journalists in Afghanistan that have been attributed to the Taliban. From ToloNews:

Niedringhaus is the fourth journalist killed in Afghanistan in the past month. The Agence France-Presse’s (AFP) Sardar Ahmed was brutally shot and killed along with his wife and two children by Taliban insurgents at the Serena Hotel; Swedish journalist Nil Honer was shot dead by an unknown gunmen while walking on a busy street in Kabul; and Afghan journalist Najibullah Parwiz was killed in Kandahar by a blast caused by an Improvised Explosive Device (IED).

What seems to be particularly ironic to me is that although the military action in Afghanistan has been primarily by US troops, the Western journalists who have been attacked recently all have been from other countries.

AFP is running this photo today along with an appeal for financial support for Abuzar Ahmad, the one surviving child of Sardar Ahmad, who was wounded in the attack that killed the rest of his immediate family: 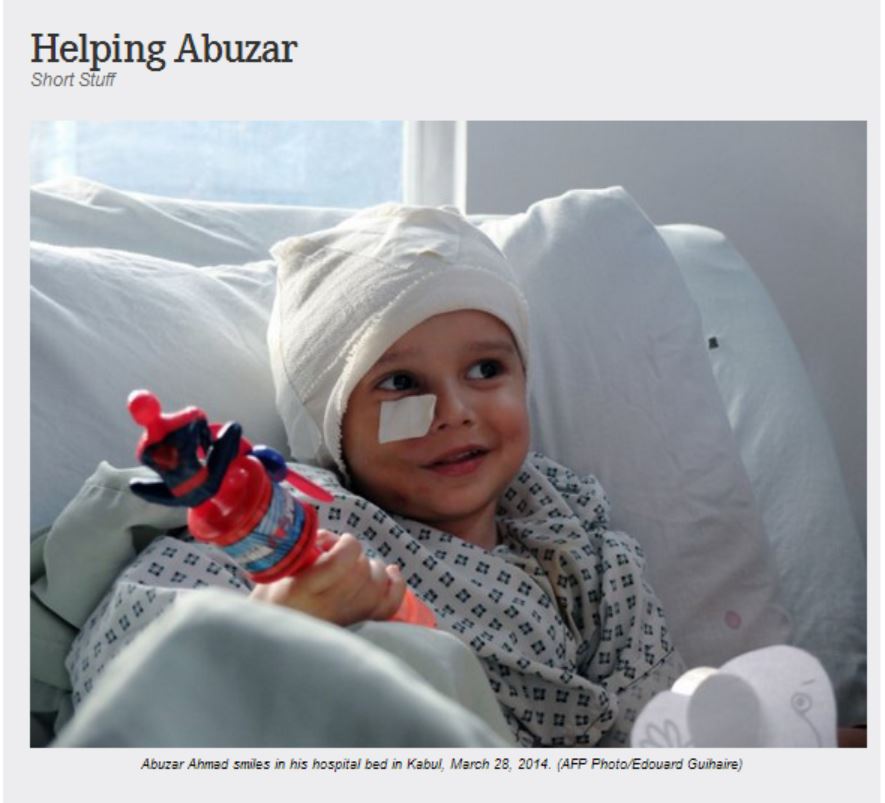 My usual response to events such as these is to describe them as evidence that after more than twelve years there, the US simply is not welcome in Afghanistan. However, read this comment in yesterday’s post from someone who has been in Kabul for the past 20 months and sees a strong civilian backlash to recent Taliban atrocities. In light of that comment, it is noteworthy that the Taliban has not yet claimed responsibility for the shooting in Tanai.