In the worst attack in at least six months, Taliban fighters overran an Afghan army base in Kunar province near the Pakistan border, killing 21 Afghan soldiers who were said to have been sleeping at the time of the attack. It appears that a very large Taliban force carried out the attack. The New York Times carried a statement from the Afghan Defense Ministry that “hundreds” of fighters were in the attack and that the battle lasted four hours, while the Washington Post stated that “more than 100” Taliban fighters carried out the attack.

The Times article informs us that at least one version of events suggests that the Taliban had infiltrators on the base who helped the assault forces:

One of the Afghan soldiers taken prisoner, who later escaped and was interviewed in the eastern city of Asadabad, said he believed that the insurgents had entered the fortified base with the collusion of infiltrators who had been on guard duty in the base’s three watchtowers and outside its barracks. He spoke on the condition of anonymity because he was not authorized to speak to the news media.

“I believe these four soldiers had links with the Taliban,” he said. “They shot our soldiers while they were sleeping. When others woke up, they were taken alive, along with me.” He said that he and three other soldiers had managed to escape from the insurgents as they fled the area.

The Times article also states that as the US draws down its forces, Afghan units no longer are accompanied by US forces and “do not have the close air support they often enjoyed”. It should be noted, though, that Afghan forces have already retaken the base. Also note that, as seen in the accompanying video of the funeral in Kabul for those killed, and as noted in this article in ToloNews, Afghan helicopters were at least available to ferry the dead, and so we are left to wonder if they were also involved in the re-taking of the base.

Afghan President Hamid Karzai canceled a planned trip in response to the attack and called for Pakistan to take action against the Afghan Taliban forces which find refuge in Pakistan. It is not clear if Karzai was aware that on Sunday, Pakistan killed at least 38 suspected militants in North Waziristan in air raids carried out by Pakistani jets. Yet another high ranking member of Pakistan’s Taliban also was gunned down today, as well.

Interestingly, at least one person the New York Times talked to about the attack seemed to think that there are still problems with screening of Afghan security forces since there are hints that sympathizers let the Taliban onto the base:

“My cousin was killed in the attack yesterday,” Hajji Alif Khan, from Khost Province, said at the ceremony at the military hospital. “I want to see the bloodshed ended in this country in my lifetime. It is enough, we lost thousands of people. Let’s stop this war,” he said.

But in the meantime, he said, “They should check every soldier’s background.”

Gosh, we were told about a year and a half ago that screening was now very good… 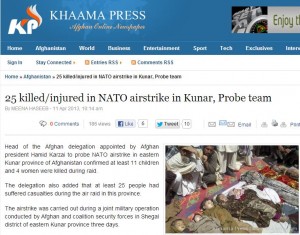 So Pasha is claiming that the children all belonged to the main Taliban suspect and were in the same house where he was located. That is very interesting considering that in an article published April 8 that also mentioned this attack, Khaama Press featured a government condemnation of the use of civilians as human shields: END_OF_DOCUMENT_TOKEN_TO_BE_REPLACED