The video above shows the elaborate ceremony that takes place daily at the Wagah border crossing just outside the Pakistani city of Lahore. On Sunday evening, a suicide bomber who was stopped at a checkpoint just outside the ceremonial site detonated his vest as Pakistanis were returning from the flag-lowering. The death toll now stands near 60 and over 100 were injured. Because thousands attend this ceremony every day, the crowds are quite dense as they leave the site. From the New York Times:

Spectators viewing the ceremony have to pass through two security checkpoints before entering the site.

Pakistani officials said the suicide bomber detonated the explosives in front of a line of shops 500 to 600 yards from the main site, at a time when security was lax after the flag-lowering ceremony had concluded.

Attendance was high on Sunday because it was a holiday, and many visitors had come from other towns and cities

The Jamaat-ul-Ahrar splinter group of the proscribed Tehreek-i-Taliban Pakistan (TTP) claimed responsibility for the Wagah border attack as its spokesman Ehsanullah Ehsan, speaking to Dawn on telephone from Afghanistan, said it was carried out by one of their men.

When asked if it was more than one suicide bomber, he said one man carried out the attack.

“We will continue such attacks in the future,” Ehsan said.

“Some other groups have claimed responsibility of this attack, but these claims are baseless. We will soon release the video of this attack,” he said.

“This attack is revenge for the killing of innocent people in North Waziristan,” the banned militant group’s spokesman said.

Earlier Jundullah, another outlawed group which was behind a suicide bombing that killed at least 78 Christians at a church in Peshawar last September, had also claimed responsibility for the Wagah border attack.

The spokesman of the splinter group of the TTP Ahmed Marwat via telephone said that the attack is a reaction to military operation Zarb-i-Azb and Waziristan operation.

Jundullah and the much larger Pakistani Taliban are among loosely aligned militant groups that frequently share personnel, tactics and agendas. Claims for specific incidents are often hard to verify.

Note that this Jundallah group is not the same one that carries out attacks on the Iran-Pakistan border.

Reuters reports that intelligence agencies for Pakistan and India had warning that an attack was coming and increased security measures prevented the bomber getting to the actual site of the flag-lowering:

“It appears the bomber wanted to target ground zero where Pakistan and India border officials stand together to perform the flag ceremony but he could not enter due to tight security on the last gate,” a Pakistani intelligence official told Reuters.

“Had he managed to reach the place, there would have been the worst scenario at both sides.”

If successful, such an attack would likely have severely tested ties between India and Pakistan, already frayed after weeks of shelling further along the border killed 17 people in October.

Unrest is not very common in Lahore. It was, however, the scene of the Raymond Davis fiasco. I’ve long been of the opinion that Davis served as a recruiter both in the US and in Pakistan, so it would be irresponsible not to wonder whether any of his recruits had a hand in Sunday’s event.

On Tuesday, noting the felony charge Raymond Davis faces in Colorado over a parking lot fight, I asked what happened to the investigation the US promised regarding Davis killing two Pakistanis in Lahore earlier this year.  It turns out I’m not alone in asking that question. Karen DeYoung at the Washington Post reports that Pakistan has made a formal request for an update on the investigation.  In other Pakistan news breaking this afternoon, we learn that a commission in Pakistan has urged filing of conspiracy and high treason charges against the doctor who assisted the CIA by setting up a fake immunization program in order to gain access to the suspected compound where Osama bin Laden was hiding.

It turns out that Pakistan asked about the Davis investigation a day before I did.  From DeYoung’s post:

In an Oct. 3 diplomatic note to Justice and the State Department, Ambassador Husain Haqqani referenced “the ongoing investigation” and asked that “the latest status in the matter may kindly be conveyed to the Embassy.” Haqqani said no reply had yet been received.

DeYoung also provides further background on the initial steps taken in the US to start the Davis investigation:

In a May 26 letter to Pakistani Interior Minister Rehman Malik, Mary Ellen Warlow, director of the Criminal Division of Justice’s international affairs office, said that the department was “currently investigating” the Lahore shooting and requested that Pakistan “take steps to preserve all evidence relating to these events” and set up a liaison officer at the embassy to handle the matter.

That, Pakistan says, is the last it heard.

Note that this letter to Pakistan came over two months after Davis was released in mid-March.  If that letter was the last Pakistan heard about the investigation, it seems safe to assume that no US investigators have been to Pakistan to examine the evidence Pakistan was instructed to preserve or to interview witnesses.  Also, it remains unclear whether the investigation into Davis’ actions also is to include investigation into the vehicle which struck and killed a pedestrian after it was dispatched from the consulate in Lahore to rescue Davis.

Voice of America brings us the news on the recommendation of treason charges against the Pakistani doctor:

A Pakistani commission said Thursday that the government should file conspiracy and high treason charges against Shakeel Afridi.

Afridi is accused of running a fake vaccination campaign to help U.S. intelligence obtain DNA samples of bin Laden and his family.

The Pakistani government set up the commission to investigate how U.S. forces managed to track down bin Laden and carry out the operation without Pakistan’s prior knowledge.

The article goes on to inform us that this same commission also interviewed Ahmad Shuja Pasha, who heads Pakistan’s  main intelligence organization, the ISI.  In addition, the commission interviewed bin Laden’s wives and children.  The commission is headed by a Supreme Court judge, but it is not clear how binding its recommendations will be. 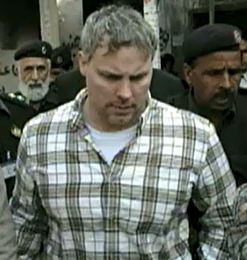