Note to John Brennan: Do Not Extrajudicially Execute Samiul Haq 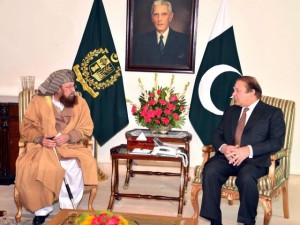 The United States, mostly with John Brennan raining down drones, has been determined to see that neither Afghanistan nor Pakistan enters into peace talks with the Taliban. Recall that in early October, the US snatched Latif Mehsud from Afghan intelligence after they had spent months trying to convince him to help them initiate peace talks. Then, on November 2, the US killed Hakimullah Mehsud, just one day before he was to join peace talks with Pakistan. And with momentum gathering again for peace talks, Brennan even strayed outside the tribal areas of Pakistan in a botched attempt to kill Sirajuddin Haqqani, but still managed to kill a senior fundraiser for the Haqqani network.

Today, showing nearly infinite patience, Pakistani Prime Minister Nawaz Sharif is making a new effort to get the peace talks started. He has chosen to publicly announce that he has appointed a representative to contact the Taliban and work with them to get talks started. From the Express Tribune:

In his attempt to revive the process of peace talks with the Tehreek-e-Taliban Pakistan (TTP) and its affiliates, Prime Minister Nawaz Sharif asked Samiul Haq to help in bringing the militant groups to the negotiation table, Express News reported on Tuesday.

Talks with the Taliban was the main issue on the agenda and Haq assured the prime minister that he will use his influence to ensure the peace process progresses in the right direction.

Nawaz has been personally meeting various political and religious leaders in order to kick start the negotiation process with the militants.

Haq clearly knows who has been disrupting the previous attempts to get talks started. From Dawn:

The JUI-S chief told the prime minister that every time the government planned to talk peace with the militants, foreign powers tried to sabotage the process.

And just who might those foreign powers be? Especially the ones with the drones? From Geo News:

Talking to Geo News, Maulana Samiul Haq said that he met the prime minister on his request. He said to the best of his ability he would try to help resolve this issue and added that the core issue was to stall the drone attacks.

US should understand that talks with Taliban were in the interest Pakistan as well as regional peace. He said when we get ready, foreign pressures do not allow us to proceed. Thousands of Pakistanis have been martyred in the war, which is not ours, he said. He demanded that the losses incurred in North Waziristan be compensated and advised the PM to revisit the foreign policy of Pakistan.

Haq is to be congratulated for his courage in taking on the difficult task of starting the peace process. He knows what has happened to previous individuals who tried to get the process started and so he knows that he is taking on this assignment under great personal risk. After all, who can doubt that if Brennan does take out Haq with a drone, this description of Haq from the Express Tribune article linked above will be broadcast everywhere:

Samiul Haq is nicknamed the ‘Father of the Taliban’ and runs a madrassa where several Taliban leaders were educated.

I would think that while trying to start the peace talk process, Haq should stay well away from that particular madrassa.

Haq seems to be putting Brennan on notice with his public statement about foreign powers disrupting peace talks. By announcing Haq’s role and releasing photos of Haq visiting with him, Sharif appears to be putting Haq under whatever protection Pakistan’s government can afford him. The ball is clearly in Brennan’s court now and today is Terror Tuesday He can allow the peace process to start, or he can put Haq at the top of his list and drone for war once again.