Special counsel Robert Mueller asked a government agency last June to preserve documents relating to Donald Trump’s transition to the presidency, according to records obtained by CNN — an indication of how he expanded the investigation soon after his appointment.

The formal preservation request to the General Services Administration, the agency that supports presidential transitions, was sent on June 22, about a month after Mueller was named special counsel.

The more expansive request came when an agent in the FBI’s counterintelligence division emailed the deputy general counsel at GSA to preserve documents, electronics and communications from the Trump transition team, according to documents CNN obtained through a Freedom of Information Act request.

The FBI request to the GSA appears to confirm a fear that the President’s friends warned him about last spring. They worried that a special counsel, which comes with broad authority to investigate any matters deemed relevant, could lead to an expansive investigation beyond what the FBI had in its initial inquiry.

In fact, the documents almost certainly show the opposite: that the FBI moved very conservatively as it investigated the Trump camp.

The release consists of two email chains. One, which starts on March 9, 2017, which asks GSA to preserve one person’s data.

Given the length of the redaction, it appears likely this request pertains to George Papadopoulos, who was a transition team member and who had been interviewed for the second time on February 16. If that’s right, it means the FBI didn’t get a preservation order on Papadopoulos’ communications until eight months after they opened a full investigation tied, in significant part, to the Australian report he had been offered “dirt” in the form of Hillary emails almost a full year earlier. That’s just a preservation order! It means the FBI came back and obtained full legal process to obtain government communications in a predicated counterintelligence investigation.

Then there’s the second request, dated June 22, 2017, which CNN probably correctly ties to some shenanigans the transition team was engaging in. It shows a Supervisory Special Agent from the FBI sending a general official preservation letter to Lennard Loewentritt at GSA. 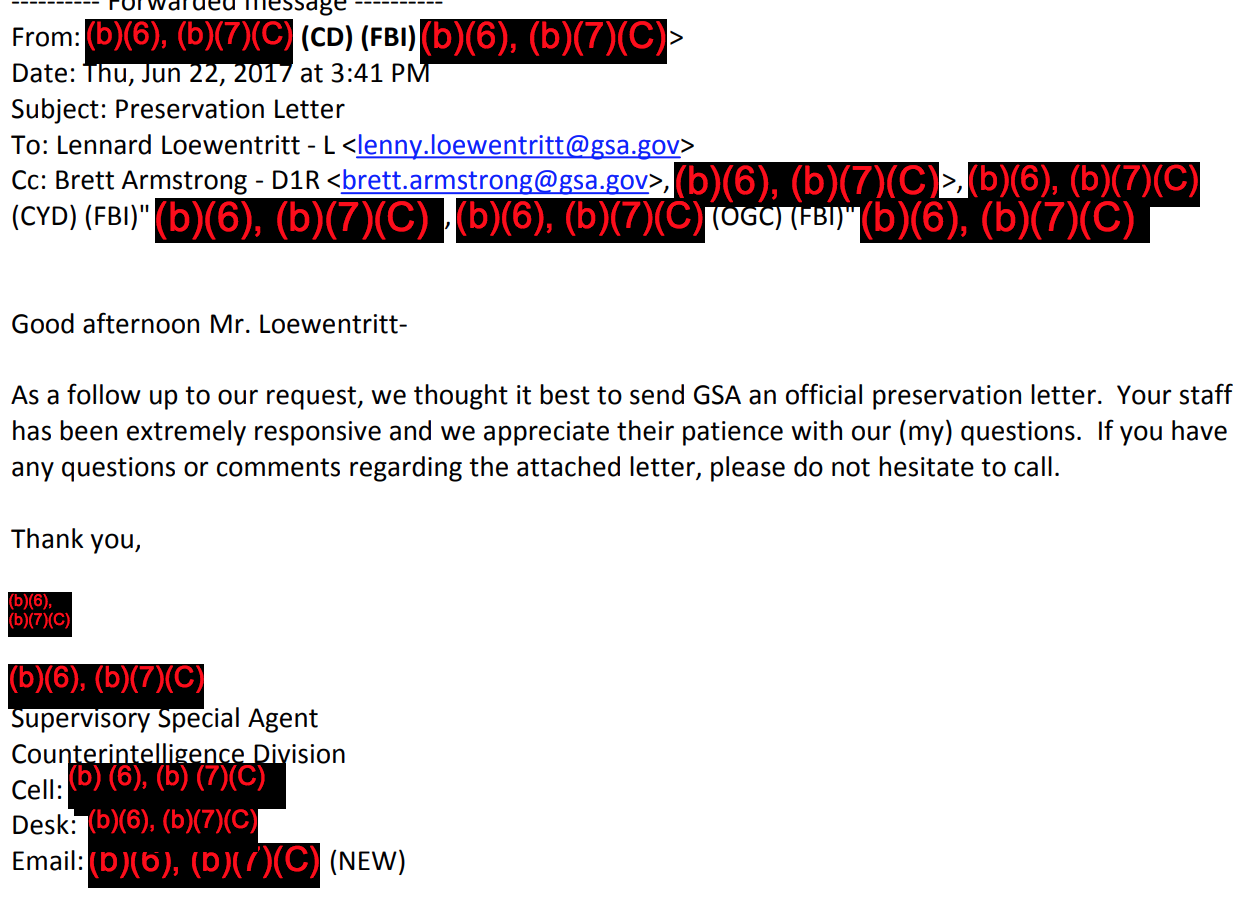 This request came a week after some shenanigans wherein the transition tried to assert ownership of public emails. Here’s how the transition described the events in a very self-serving complaint to Congress (a complaint they seem to have dropped).

After Inauguration Day on January 20, 2017, TFA wound down the bulk of its activities, vacated the premises provided by the GSA, and returned to the GSA the computer and telephone equipment that TFA had used during the transition period. Shortly thereafter, the GSA asked TFA for direction on the disposition of PTT data. TFA directed the GSA to handle PTT data in a manner consistent with the MOU and the reported disposition of data from President Obama’s presidential transition in 2008; computing devices were to be restored to original settings and reissued to federal personnel and, to the extent that PTT records were not required for the winding down of TFA’s affairs, the PTT email archives were no longer to be preserved.

Approximately two months later, TFA became aware of certain requests concerning PTT records. TFA promptly instructed the GSA, as the custodian of certain TFA records including PTT emails hosted on GSA servers, and others to preserve PTT records. Because of TFA’s prompt reaction, all PTT emails have been preserved.

In order to comply with congressional document production requests, TFA ordered from the GSA electronic copies of all PTT emails and other data. Career GSA staff initially expressed concern that providing copies of PTT emails to TFA might violate a document preservation request that the GSA had received from the Special Counsel’s Office. This issue was resolved decisively on June 15, 2017 after a series of emails and telephone calls between TFA’s legal counsel and Richard Beckler and Lenny Loewentritt, the newly appointed General Counsel for the GSA and the career Deputy General Counsel for the GSA, respectively. After discussion and consideration of the issue, Mr. Beckler acknowledged unequivocally to TFA’s legal counsel, in the presence of Mr. Loewentritt, that TFA owned and controlled the PTT emails and data pursuant to the Presidential Transition Act, and that the GSA had no right to access or control the records but was simply serving as TFA’s records custodian. Mr. Beckler assured legal counsel for TFA, again in the presence of Mr. Loewentritt, that any requests for the production of PTT records would therefore be routed to legal counsel for TFA. In the meantime, Mr. Beckler agreed to maintain all computer equipment in a secure, locked space within GSA facilities. There are multiple surviving witnesses to this conversation, including me. Additionally, we understand that the following day, June 16, 2017, Mr. Beckler personally informed the Special Counsel’s Office that PTT records are not owned or controlled by the GSA, and that the Special Counsel’s Office should communicate with TFA if it desired to obtain PTT records.

Here’s what Loewentritt, named in this email, told Buzzfeed really governed the Trump camp’s use of government resources.

Loewentritt said, “in using our devices,” transition team members were informed that materials “would not be held back in any law enforcement” actions.

Loewentritt read to BuzzFeed News a series of agreements that anyone had to agree to when using GSA materials during the transition, including that there could be monitoring and auditing of devices and that, “Therefore, no expectation of privacy can be assumed.”

Loewentritt told BuzzFeed News that the GSA initially “suggested a warrant or subpoena” for the materials, but that the Special Counsel’s Office determined the letter route was sufficient.

As to whether the Trump campaign should have been informed of the request, Loewentritt said, “That’s between the Special Counsel and the transition team.”

Which seems to suggest that after Mueller’s team learned that the transition was trying to get their own copy of the emails, they obtained a preservation request for everything a week later.

If these two interpretations are correct, then what we’re seeing is the exact opposite of what CNN claims. Rather than showing a fast expansion of the investigation, it instead shows a remarkable delay in investigating Papadopoulos, and then, as the investigation got started, after Trump people tried to intervene, Mueller’s team took the prudent step of issuing a preservation request (followed, months later, by a legal request for the content).

If the two suppositions here are correct, then there’s just one other thing that might change the analysis. Transition Counsel Kory Langhofer described the transition becoming “aware of certain requests concerning PTT records” two months after they preserved everything in January. Requests, plural.

One of those is surely the one we’re looking at, which I guess is Papadopoulos. The other, obvious one, would be Mike Flynn. But if there were more requests than that, then that would be news.

Update: There’s one more person who might obviously be included in a March request: Rick Gates.