The top-notch Frontline/ProPublica/McClatchy group that has been continuing to investigate the anthrax attacks of 2001 and the subsequent Amerithrax investigation by the FBI posted some photos on Monday that they obtained through FOIA requests. They are here. Mouse over the first photo and then you can click through the slideshow. The most important photo is the one of the lyophilizer. The FBI is claiming Bruce Ivins used this to dry the spores used in the attacks. That is not two pieces of equipment in the photo; here’s a clearer shot of what looks like the same model available on the used market. The thing is huge! The problem is that it is NOT in Ivins’ “hot suite”, so using it in its place would have put spores all over the place in area where at least some of the personnel probably weren’t vaccinated (and thus would have died). This would have been an obvious contamination event Ivins could not have hidden. Technically, the lyophilizer is “mobile”, but as you can see, it’s the size of a refrigerator and it would have been obviously missing if Ivins wheeled it into the hot suite. Also, it uses 220V (see the wiring that obviously was put in so the lyophilizer could be used in this spot), so Ivins might not have had an outlet available in the hot lab. Also notice the piece of paper on the top part;  that’s most likely a sign-up sheet to reserve it since this thing is used for drying down large amounts of liquid and these runs take a number of hours. You can bet if Ivins had signed into the log during the critical period we would know about it. There is only one sheet there, though, so the sheet from the appropriate time period might not have survived until the time USAMRIID was being looked at carefully.

Here is the photo of the lyophilizer, slightly enlarged from the PBS website: 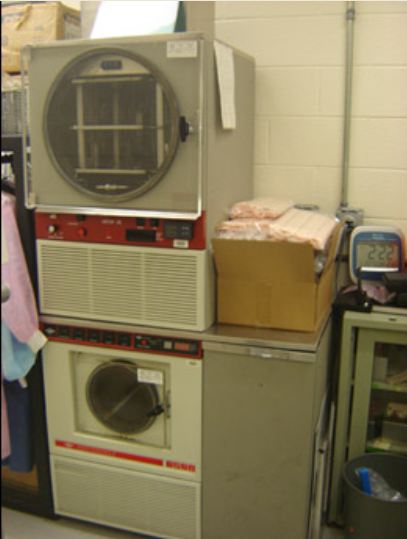 The caption supplied by the Frontline/ProPublica/McClatchy team reads:

The lyophilizer, or freeze dryer, which the FBI says Ivins could have used to make the attack anthrax. Stored outside of the secure BSL-3 hot suite, the lyophilizer was a central focus of the investigation; however, the FBI was never able to definitively link it to the attack anthrax, and some of Ivins’ colleagues are skeptical that he would have risked drying anthrax outside of the secure suite.

The FBI’s claim that this lyophilizer was used by Ivins came about in a very emabarrassing way for the Department of Justice. DOJ had submitted a document in the wrongful death suit filed by the widow of Robert Stevens, who was the first fatality in the attacks. The initial filing stated flatly that Bruce Ivins did not have access to the equipment needed to dry the anthrax spores used in the attacks. After the FBI went ballistic over that filing, a judge allowed DOJ to submit an amended document (see page 3) where DOJ referred to the “refrigerator sized” lyophilizer in the BSL-2 containment area, where DOJ also noted that no work with live anthrax was carried out.

For those of you who want more details on the science behind the reasoning that Ivins could not have used this lyophilizer in this spot to dry the spores used in the attack, keep reading after the jump.  END_OF_DOCUMENT_TOKEN_TO_BE_REPLACED