Yesterday, I decided that I should take a deep dive into a couple of issues that are playing big roles in current political drama: the Middle East nuclear power plant plans that Michael Flynn “represented” in some travel but did not note in his security disclosures and the manufactured controversy over Uranium One. I’m still reading and hope to post regularly on these and other topics, but want to point out one passing reference that made my jaw drop.

In Monday’s Washington Post article on Flynn’s troubles, we have this passage:

Around June 2016, according to his financial disclosure, Flynn ended his association with ACU and began advising a company called IP3/IronBridge, co-founded by retired Rear Adm. Michael Hewitt, a former ACU adviser.

IP3 initially proposed partnering with China and other nations, rather than Russia, to build nuclear power plants, according to a company spokesman, who said the China component has since been dropped.

In August 2016, the company produced a PowerPoint presentation that included Flynn’s photo and former government title on a page titled “IP3/IronBridge: Formidable US Leadership.” The document was labeled as a “Presentation to His Majesty King Salman Bin Abdul Aziz” of Saudi Arabia and displayed the seals of Saudi Arabia and the United States. The presentation was obtained by Democrats on the House Oversight Committee, who made it public.

After reading this, I started digging a bit into IP3, to see what they have been up to. I found this fascinating piece in Medium, written by the all-star trio of Jack Keane, Keith Alexander and Bud McFarlane. The article dates from October 31 of this year, so it comes over a year after the PowerPoint referenced in the Post article. The Medium article opens with the basis for the US-Saudi relationship going back more than seven decades:

In 1945, President Roosevelt and King Abdul Aziz of Saudi Arabia forged a partnership under which the United States provided security for the Kingdom to assure the flow of oil to global markets. While the United States has never wavered from this commitment through 13 Presidents and 6 Saudi monarchs, the core themes of arms and oil alone no longer cover the full scope of our countries’ goals and mutual interests.

That’s pretty blunt language, but yes, the core theme of US-Saudi relations does indeed seem to be “arms and oil”. But a bit further down, we have this:

Any new U.S. strategy for the Middle East will fail unless we move beyond fighting terrorism or reacting to the influence of evolving regional encroachment from Russia and Iran. The United States must approach the Middle East in ways that promote diversified, strong economies. We need a strategy that doesn’t rely solely on resourcing conflict with weapons sales, arms agreements, or new deployments of U.S. military forces, but one of empowerment through the intellectual capital and industrial might of our nation’s private sector. We must better enable the stabilizing visions of our GCC partners, Egypt, Israel, and Jordan as part of a reimagined Middle East economy.

I have to admit that on my first reading of this paragraph, I chuckled. I was convinced that it contained a very revealing typo. I mean, surely these retired generals would never just come out and say that the US strategy in the Middle East is to “resource conflict”, would they? Didn’t they mean that the weapons sales, arms agreements and troop deployments are aimed at resolving conflicts even though they certainly provide the resources to prolong them? That’s how the US presents these moves, after all. Who even uses “resource” as a verb anyway?

I continued in my reading, and in this copy of a letter from the Democrats on the House Oversight Committee posted by Politico (always read the footnotes; the URL is in footnote 21) I hit paydirt with the URL for IP3 PowerPoint referenced in the Post article above. Here is the slide that the Post refers to on the IP3 team including Flynn: 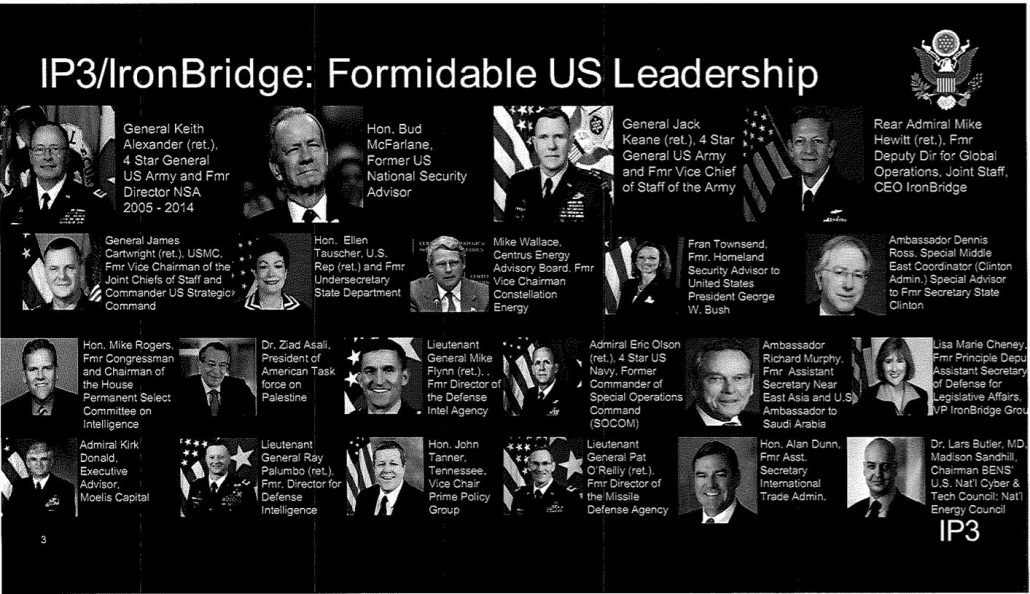 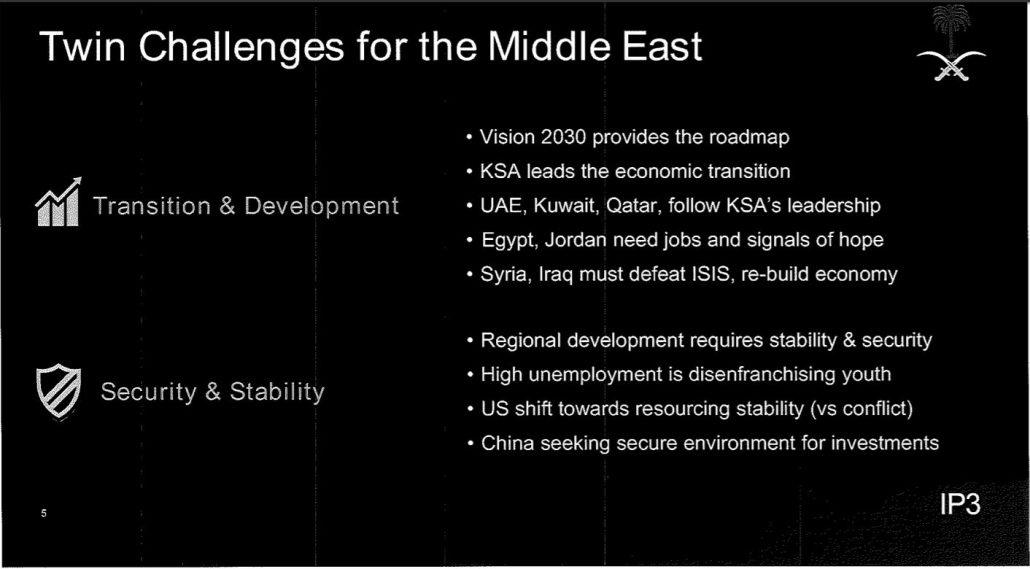 And there we have it. The Medium article did not have a typo. Over a year earlier, the PowerPoint says the US should “shift toward resourcing stability” rather than resourcing conflict. I find that to be a remarkably candid statement, considering who is saying it.

For quite some time, my line on US strategy for any trouble spot in the world has been that the US asks “What group can we arm?”. Here we have a huge collection of retired generals saying very much the same thing in slightly different language. I follow my observation by saying our question should rather be “What can we do to address the concerns of those who are moved to violence in this trouble spot?” And again, this group is offering their alternative. I see this as a massive improvement in outlook and perhaps a bit of slowly dawning self-awareness on behalf of the generals for what their actions have wrought.

Of course, once we dive into the IP3 team’s vision for how we “resource stability” things go right back to the track history of these generals proposing policies that are almost the exact opposite of what should be done. But that is fodder for later posts.

Just a couple of closing notes seem in order. First, it is clear from the committee letter in which I got the PowerPoint URL that the file actually was sent to the committee by an employee of ACU, which is a competitor of IP3. Further, the cover slide contains the cryptic note “2016 MSH Proprietary and Confidential”. I haven’t found an explanation for “MSH”. I thought it might refer to Michael Hewitt, but his middle initial is W. It doesn’t seem to fit any of the companies involved or the ACU employee who sent the file.

Also, in all the articles I’ve read about Flynn’s involvement in this effort, it appears that he consistently and publicly advocated for the building of the power plants to avoid Russian involvement and to be undertaken as an approach to reducing Russia’s influence in the Middle East. That makes Flynn’s June 2015 trip sponsored by ACU very confusing, since ACU is the group advocating Russian involvement in the building and running of the power plants. It would, however, align with his move to IP3 once it was formed. Also, the stories now seem to suggest that within the White House, IP3’s approach was quashed based on Flynn’s conflicts of interest rather than any White House preference for Russian involvement in building the plants. Will that story change? After all, Russia eventually got the contract for Egypt.